The Adaptive Value of Happiness

This Being Human blog post is written by Dean Falk. 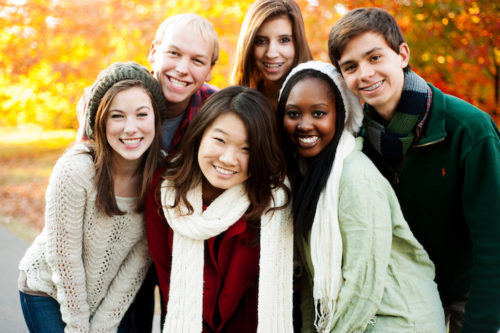 Since Darwin, some scientists have believed that the uniquely human ability to make and enjoy complex music facilitated successful courtship in our ancestors. Others think that musical ability is a lovely but evolutionarily useless spinoff that became part of the human psyche by riding on the coattails of language—as psychologist Steven Pinker famously quipped, merely “auditory cheesecake,” by analogy to foods that weren’t present in our ancestral environment but take advantage of tastes for sugar and fat that evolved for other reasons. The debate continues today.

We also have a proclivity for dwelling upon and pursuing happiness. Is this trait adaptive or psychological cheesecake? That is, did hominins who were more inclined than others to be happy have more offspring, thus passing along the genetic substrates and benefits of their good moods? Did they contribute a greater share of the intellectual or cultural innovations that ultimately enhanced human fitness? Here I discuss the possible role of happiness in human evolution and suggest that you put away the dessert forks.

Happiness is a broad concept that is associated with various moods (bliss, joy, playfulness, optimism, contentedness, a sense of well-being, serenity, hopefulness, anticipation of pleasure), as well as pleasurable physical sensations. Although other animals appear to experience physical well-being and pleasurable moods, only humans take pleasure in the sustained pursuit of creative and productive behaviors. In addition, only humans seem to worry about the future.

A large component of human happiness is linked to the ability to focus on specific goals. Brain imaging and EEG studies show that the goal-directed form of happiness, seen, for example, when deliberately achieving a serene meditative state is associated with activation of the left prefrontal cortex. This is not surprising because the human prefrontal cortex is important for higher cognition, has highly evolved connectivity, and is activated when thinking about the future—an inherent property of goal-directed behaviors.

To be evolutionarily adaptive, a trait must meet two criteria. First, it must be at least partly genetically determined, as happiness seems to be. Numerous studies suggest that people are born with baseline levels of happiness that are highly heritable, and that each of us tends to return to an individual baseline level over time, even though circumstantial factors contribute to a subjective sense of well-being.

Second, adaptive traits must be associated with more positive health and longevity, which is necessary for natural selection to operate. Again, studies suggest this is the case for happiness. For example, one fifteen-year study of 861 elderly people found that the happier individuals lived longer, experienced less disease, and engaged in more physical activity than their less happy peers. Other research reveals that happy people develop more antibodies than average when vaccinated for flu and have reduced or limited risks for a variety of diseases, including upper-respiratory infections, cardiovascular disease, diabetes, pulmonary disease, and hypertension.

These neurological, genetic, and health factors show that human happiness at least has the potential to be an adaptive trait. But was it actually adaptive or did happiness develop as an indirect side benefit of something else? Circumstantial evidence suggests that the unique goal-directed form of human happiness indeed may have been (and may continue to be) adaptive. A remarkable study of 2,250 adults revealed that people’s minds wandered nearly half of the time, during which they were less happy than when their minds were focused on specific activities (conversing, listening to music, exercising). If “a human mind is a wandering mind, and a wandering mind is an unhappy mind,” it is reasonable to surmise that a focused mind is a happy mind.

Compared to other primates, humans are able to focus extraordinarily well, which depends largely (but not exclusively) on our evolved prefrontal cortex. We use this part of the brain to plan activities, to keep them in mind, to bring our plans to fruition, and to form other plans for the future. Without the inclination to anticipate and carry out these activities, humans would not have become such an intelligent, creative (and, alas, destructive) species.

Happiness researchers have shown that anticipation of the successful completion of goals is a carrot that motivates people (as, presumably, it did our ancestors) to pursue objectives, creative and otherwise—so forget the cheesecake! In keeping with this idea, the achievements and inventions that shaped human evolution (and continue to do so) are products of natural selection for cognition that entails a remarkable ability to become absorbed in specific goals. Athletes describe such a state as “being in the zone.” Its intellectual equivalent, dubbed “flow” by the Hungarian psychologist Mihaly Czikszentmihalyi, is associated with happiness. During flow, you become entirely absorbed in a mental or physical activity and experience a heightened sense of awareness.  Flow will not happen during activities that are involuntary, boring, or unenjoyable.  Instead, activities that are conducive to flow are challenging or even enthralling, and they are usually associated with goals.

Einstein might not have discovered relativity if he had not experienced flow and if his famous thought experiments failed to bring him happiness. The emotional rewards of creative pursuits may have motivated early hominins to invent tools, the first language, and ways to start and use fire. If they were not happy in their work, would modern scientists continue to create inventions that contribute to human well-being and extend our lives? Such inventions are the product of natural selection for humanlike intelligence.

Of course, human inventions can also be used in destructive ways. My main points, though, are that deep within the human psyche the anticipation of happiness motivates the pursuit of goals, and that their achievement delivers the anticipated emotional reward—happiness. In other words, a heavy dose of the uniquely human proclivity for becoming happily absorbed with goals is grounded in anticipating and experiencing satisfaction with a job well done. For these reasons, my bet is that happiness was and remains fundamentally important for the evolution of our species.

Dean Falk is a Senior Scholar at the School for Advanced Research in Santa Fe, New Mexico, and the Hale G. Smith Professor of Anthropology at Florida State University.

Journal Article, Guest Post
Human beings used to be defined as “the tool-maker” species. But the uniqueness of this description was challenged in the 1960s when Dr. Jane Goodall discovered that chimpanzees will pick and modify grass stems to use to collect termites. Her observations called into question homo sapiens‘ very place in the world. Since then scientists’ knowledge of animal tool use has expanded exponentially.
« An Interview with Steven Heine: Looking for Human Universals
Culture: the Engine of Human Adaptation »
« BACK TO BLOG