“The Francis H. Brown African Scholarship is a much-needed resource for aspiring East African earth scientists and botanists. Our father believed deeply that Africans should be given the same opportunities as Europeans and Americans to research our shared history and be stewards of the natural wonders that reside in their region. This fund represents his commitment to making his vision a reality.”

The purpose of the Francis H. Brown African Scholarship Fund is to expand human knowledge and scientific interest in earth sciences and botany related to human origins by providing financial assistance to East African researchers and students pursuing research in these areas. The fund is further intended to support research that builds on the work of Dr. Francis H. Brown and builds capacity in the earth and botanical sciences in East African institutions. 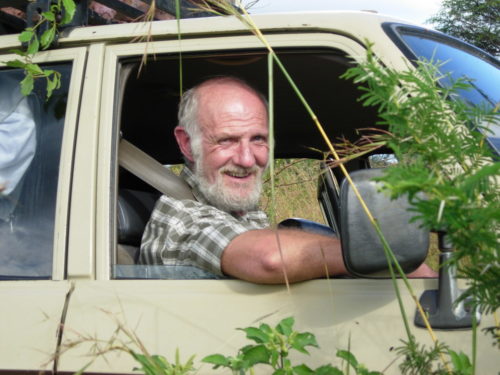 Frank Brown was a geologist whose study of the Omo-Turkana basin provides the basis for the timeline of human evolution. He devoted more than fifty years to mapping and analyzing the geology of northern Kenya and southern Ethiopia, and his work provided a way to place fossil finds in chronological order.

During his time working in Ethiopia and Kenya, Frank Brown became an expert in not only the geology but also the plant life of the Omo-Turkana basin. He studied several languages, including Kiswahili, Kikamba, Kikuyu, and Turkana. He also sponsored the education of many university students from Ethiopia and Kenya.

He taught at the University of Utah where he served as chair of the department of geology and geophysics and received the Rosenblatt Prize, the highest honor of the University of Utah. He also served as co-chair of The Leakey Foundation’s Scientific Executive Committee from 1993 until his untimely death in September 2017.  We are honored to work in partnership with his daughters, Elise Brown Ersoy and Erica Brown Gaddis, to fulfill one of Frank’s wishes, the creation and funding of the Francis H. Brown African Scholarship Fund.

Students or researchers of African heritage who are citizens of Kenya, Ethiopia or Eritrea who (a) are pursuing a doctoral degree at an accredited university, preferably from, but not limited to, an institution located in sub-Saharan Africa or (b) have completed their doctoral degrees no longer than six years prior to the time of application for funding from this source. Applicants shall demonstrate a commitment to a career in their field of study with an emphasis on research and teaching in his/her country of origin following the completion of his/her degree.

If you have any questions, please email us at grants@leakeyfoundation.org

No funds shall be provided from this fund for:

Please include your CV as well as the CV of your advisor. Each CV should be limited to two pages.

Your sponsor’s letter of support may be uploaded as a PDF. If your sponsor prefers to send the letter directly to us, it may be sent to grants@leakeyfoundation.org

Please include a photo of yourself. This photo may be. jpg or .tiff format.

If you would like to include references, please upload them in PDF format. Please limit the references to two pages. References should be listed in APA style. Examples of APA reference style are available at Purdue.edu

If you have any questions, please email us at grants@leakeyfoundation.org