In Defense of Science

As I helped put together our issue-based fundraising appeal letter last week, I was struck by the sentence at the top of the page. “Science is under attack in the 21st century.” This is not to imply that this is something new. Science was under attack in the last century and the century before as well. The implication is that science is STILL under attack, and that is what’s unsettling to me. I ask, still?

We need not begin to list the statistics that prove this point (and there are plenty of statistics), but I do think that it is helpful to look at the possible reasons as to why this is the case in this day and age. With regards the science of evolution, perhaps it is easy to understand the reasons why there are those who deny its existence. There are belief systems out there that conflict with evolution. Though many of us know that this does not necessarily need to be the case, it is certainly understandable. When it comes to science in general, be it climate science or medical science, the source of such denial may be a little less obvious. However, one reason that does seem to be universal in all attacks on science is that there is a basic misunderstanding of how science works, and those wishing to push an agenda use this to their advantage.

The Leakey Foundation is not a political organization, and so we do not push an agenda nor do we engage in such discussion or debate. Our foundation exists to fund science and share the results of this science with the public. In other words, we fund, and we educate.  So in a sense, The Leakey Foundation IS in the business of defending science, albeit in an indirect manner, and I believe it is worth looking into exactly how our foundation goes about this.

I was lucky to have a sixth grade teacher who helped me to discover my love of science. Through our frequent and informative science-focused walks on our very own nature trail as well as our end of the year program where we shared our newly found science knowledge with younger students, Mr. Roper helped inspire a curiosity in science in me (and I assume many other students), and that same curiosity kept me engaged in science throughout my life. I was a science fair participant (and occasional winner) throughout my junior and high school years. I learned all about the scientific method by getting to actually participate in those same methods. I then majored in science in college, and now I work for a science organization. So I was lucky to have been introduced to science at a young age and thereby was never influenced by those attacks on science that rely on misinformation. 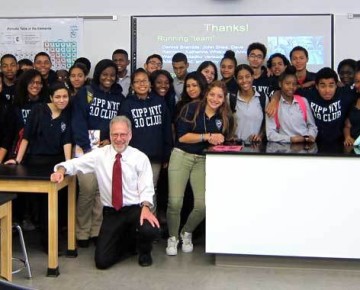 As an adjunct to our speaker series The Leakey Foundation conducts a school outreach program. Throughout the year over 1200 students benefit from having a leader in the field visit their classroom to show them what it is to BE a scientist. The hope is to stimulate these young minds and inspire some of them to choose science as a career path or at least keep them scientifically curious throughout their lives. In other words, we send these students their very own Mr. (or Ms.) Roper who shows them precisely what it is like to participate in the scientific method. In addition, I believe these students benefit from having an anthropologist answer questions like, “why if we came from monkeys are there still monkeys?” Who better to explain the truth? These visits combined with robust science programs at these schools provide the foundation for a life of understanding how science works.

Beyond school outreach, it is my humble opinion that The Leakey Foundation has put together a collection of programs that cover many of the bases in the defense of science. Our lecture series is held throughout the United States. We introduce our audience to top scientists in the fields of paleoanthropology and primatology. These are not dumbed-down science lectures. These are experts sharing the results of their important research. 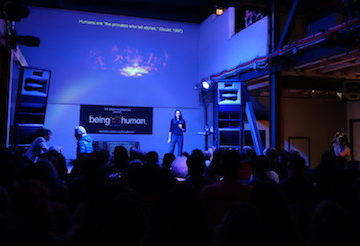 Our more casual “bar talks,” which will soon be re-branded with a new and exciting name, are aimed at a younger audience and are meant to put a fun spin on, a less “stuffy” feeling about science. And it works. The audience is engaged, the laughs are a plenty, and the crowd keeps coming back. We are making science accessible, and I am convinced that our audience members would never fall for the “because evolution is just a theory, then it can’t be a fact” trick.

As the world of technology has evolved, so has The Leakey Foundation. Many of our programs have gone online, and therefore our audience is growing at a pace unimaginable decades ago. We have our Origin Stories podcast, which provides an up close and personal view into the world of science by telling interesting stories and sharing informative interviews. Science is once again accessible. We are breaking down the stigma that you need to be a nerd to be interested in science, and these podcasts have been listened to over 110,000 times! 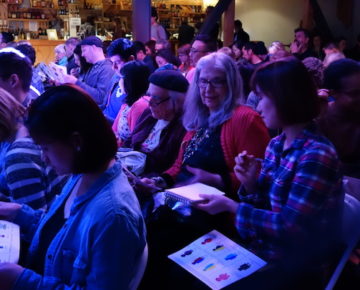 We also video tape our lectures, and we look forward to rolling these out on our web site and social media outlets in the near future. These recordings enable us to reach FAR more audience members than we ever could with our brick and mortar programs. In addition, we also use our blog to share the research we fund, giving our grantees the opportunity to share their projects in their own words.

So as you can see, The Leakey Foundation has become a well-oiled science-defending machine. I am proud of the work we do, and as I reflect on how influential (directly and indirectly) our programs are and can be, I am optimistic that we are winning the fight in the defense of science. I hope you agree and will help make our fundraising a success!

Remember, we have a 1:1 matching pledge up to 1 million dollars this year. Let’s make it happen!