From the Field: Stephanie Musgrave, Goualougo Triangle, Republic of the Congo

Stephanie Musgrave of the Washington University in Saint Louis was awarded a Leakey Foundation Research Grant in 2016 for her project entitled “Ontogeny of complex tool use among Goualougo Triangle chimpanzees.” Click here to read an introduction to her research. 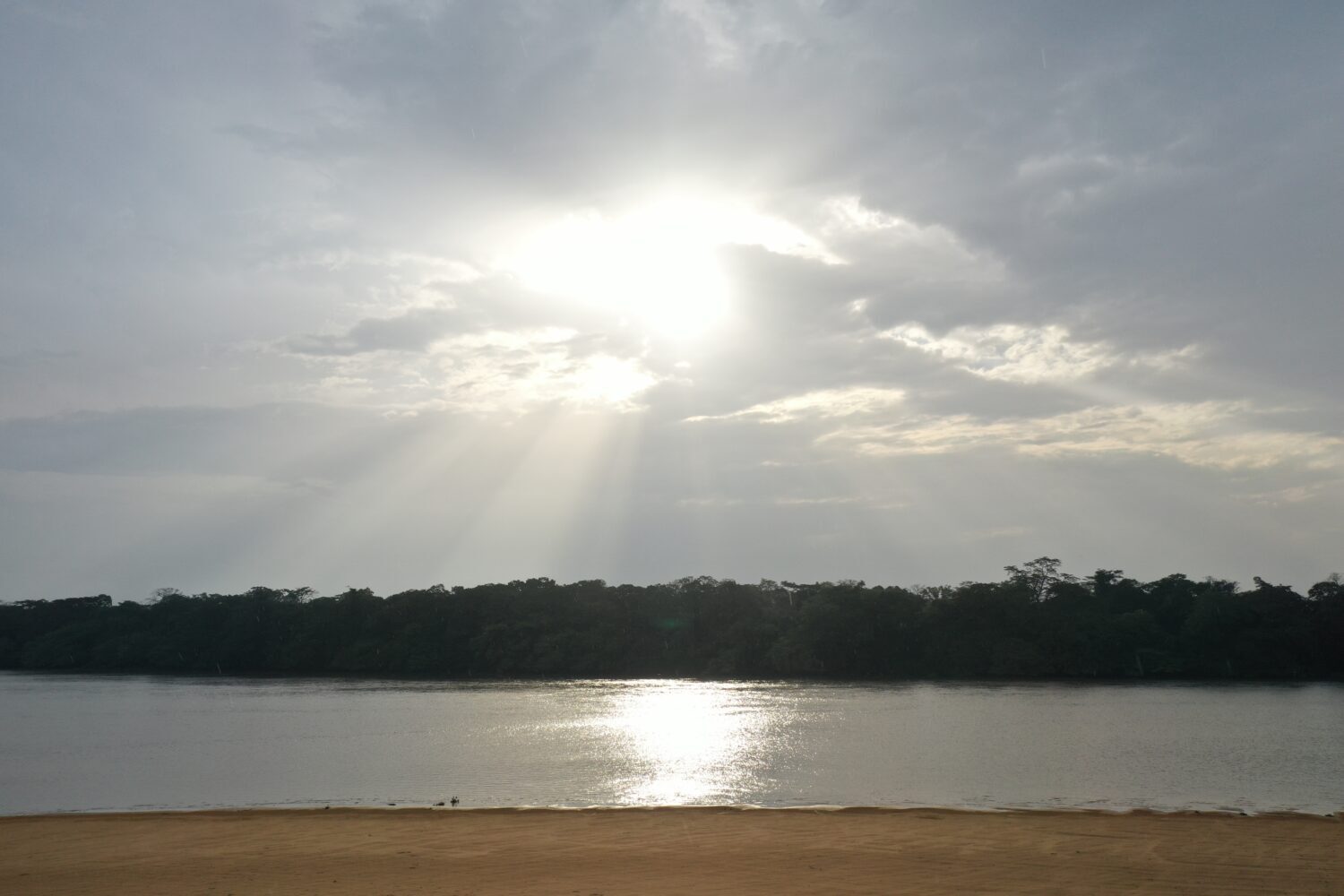 The sun rises over the Sangha River, which bisects the Sangha Tri-National Forest. This landscape spans the Republic of Congo, Central African Republic, and Cameroon, and includes the Nouabalé-Ndoki National Park, where the Goualougo Triangle is located. Photo GTAP/Morgan/Sanz.

It’s early morning, and the forest of the Goualougo Triangle is already filled with activity. This is to be expected here, given the spectacular biodiversity within this enclave of pristine rainforest. My attention at this moment is captured by a forceful rustling at my feet, the bustle of countless termites foraging among the thick, dry leaf litter. This is a welcome sound, and a promising sign, too. As we walk, primarily looking and listening for signs of chimpanzees, we also have a second goal: find underground termite nests. These subterranean labyrinths can be cryptic, but they are no secret to the chimpanzees. 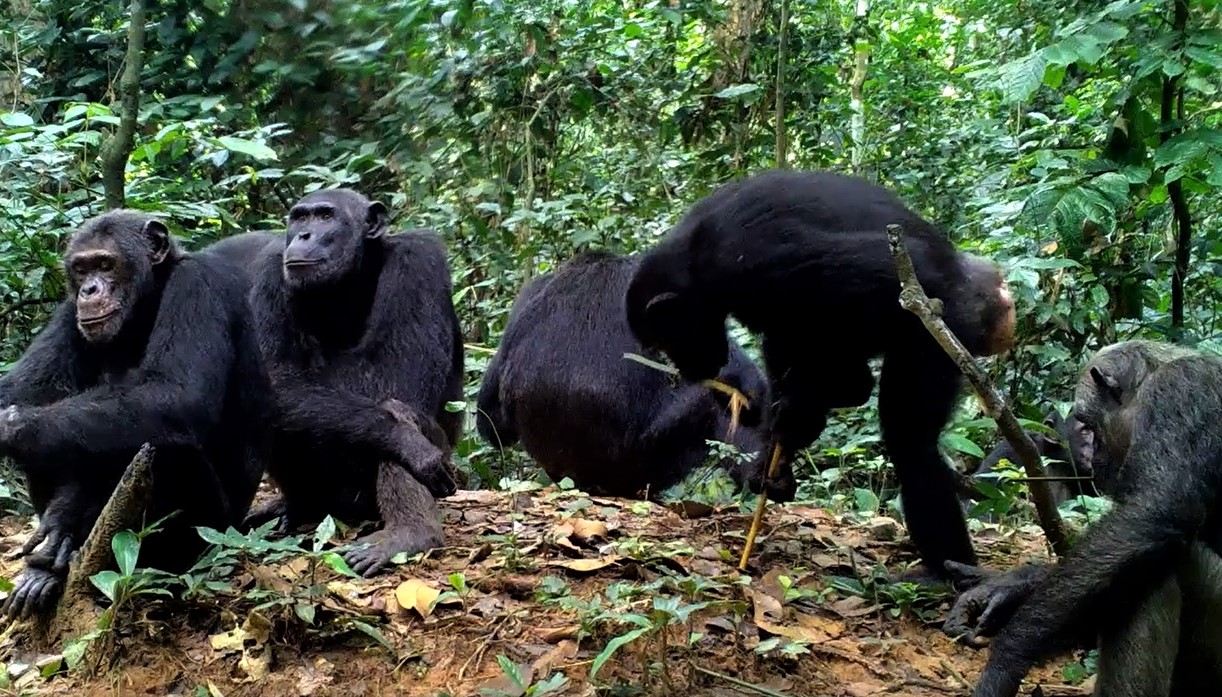 A remote camera trap records footage of a visit by seven chimpanzees to a subterranean termite nest. An adult female uses a puncturing stick to create a tunnel into the nest; she is also holding in her mouth a fishing probe, the end of which she has frayed into a brush tip. This feature is an intentional modification that improves the efficiency of these probes at gathering termites.

For two decades, scientists of the Goualougo Triangle Ape Project have studied how these apes make and use tools to gather termites and other resources such as ants, honey, seeds, and marrow. These research efforts rely on direct observations of chimpanzees, as well as an array of camera traps stationed at termite mounds across four chimpanzee communities. My research focuses on the acquisition of tool-using skills in this population, as well as the social processes supporting the transmission of tool skills over generations. Every termite mound has a different story to tell – what chimpanzees visit, how youngsters learn to use the different tool types involved in termite gathering, who shares tools and with whom. This morning, we are searching for new termite mounds to install remote cameras, which will undoubtedly expand our knowledge of one of the most complex tool-repertoires in the animal kingdom.

The forests here in the Congo Basin have the richest diversity of termites in the world, and the chimpanzees most often prey on a type of termites called Macrotermes. Termite species from this group build a network of nest chambers below the ground; some species also build large, free-standing, castle-like mounds that can reach several meters in height. A termite nest is a true feat of architecture, a protective fortress (from the elements like rain and wind as well as predation) for its inhabitants and a place to store food. Worker termites leave the nest to forage on plant material such as wood or fallen leaves; when they return, this material passes through their bodies and aids in the formation of fungus gardens that nourish colony members that can number in the hundreds of thousands. Termite nests are also temperature controlled. The above-ground towers have a central air shaft, with ventilation passages leading from the interior to the mound walls. To gather termites from the above-ground mounds, chimpanzees use a twig or their fingers to re-open the exit holes recently sealed by termites traveling to and from the nest. Then, the chimpanzees insert a modified flexible herb stem down these passages to gather termites.

Getting termites from the underground nests can be trickier. Chimpanzees first have to decipher the location of the hidden nest galleries, which are an average of 50 centimeters beneath the ground surface. Termites construct and maintain tunnels that facilitate their above-ground foraging expeditions; these can be several meters, or farther, from their nests, so finding these underground chambers is no easy task. Once a promising location is deduced, the chimpanzees must drill down through the earth to access the chambers. In the Goualougo Triangle, chimpanzees use the smooth, stout branches of a particular tree species to puncture into subterranean nests. They may make hundreds of attempts, and expend substantial energy to tunnel into these nest chambers; only then can they insert an herb stem and extract termites.

Why go through all this trouble? Termites can provide protein and fat, as well as other valuable nutrients, such as manganese, vitamin B12, and sodium that may not be acquired as readily from fruit or leaves, which are staples of their diet. Other animals share chimpanzees’ enthusiasm for termites, but chimpanzees are unique in using such a diversity of tools to gather them – with the exception of humans. Around the world, humans have developed sophisticated strategies to harvest these insects, and humans and their ancestors may have done so for millions of years. Wear patterns on bone tools used by hominin populations in southern Africa between 1 and 1.8 million years ago suggest these tools were used to dig into termite nests. 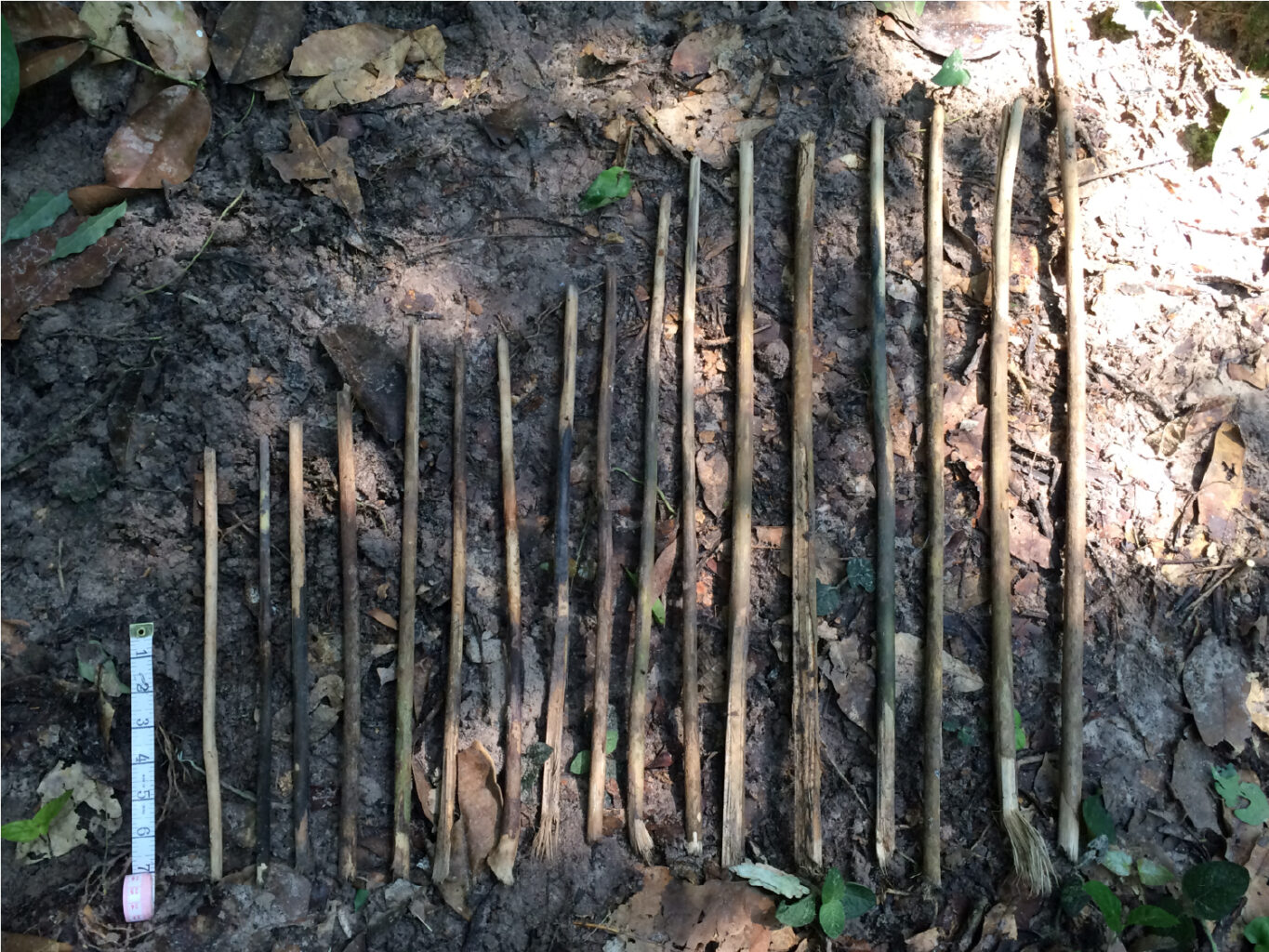 The field team finds 17 puncturing sticks at the subterranean nest. Bark has been stripped from the end of the tools by chimpanzees repeatedly inserting them through the soil. This species of small tree, Thomandersia hensii, is also widely used by humans for preparing of food (manioc) and shelter construction. Photo: Crickette Sanz

Chimpanzee tools also show evidence of use. A particular puncturing stick can be reused by multiple individuals over a period of weeks or months, and puncturing sticks with the bark worn away are likely to have been reused over and over again to drill down into the earth and eventually the nest. Conserving puncturing sticks at a termite nest saves chimpanzees from having to locate tool material and manufacture these tools anew for each visit; indeed, chimpanzees often arrive at favored subterranean termite nests carrying fish probes, but no puncturing sticks, as the latter will likely be present at the nest already. With the exception of humans, this type of tool reuse is rare across the animal kingdom.

We are on the lookout for such tools this morning, and we approach an area where we see a concentration of used puncturing sticks. Tools in this kind of abundance (>10) indicate a rare but very active termite fishing mound. Round holes dot the surface of the earth where chimpanzees have recently punctured the soil. 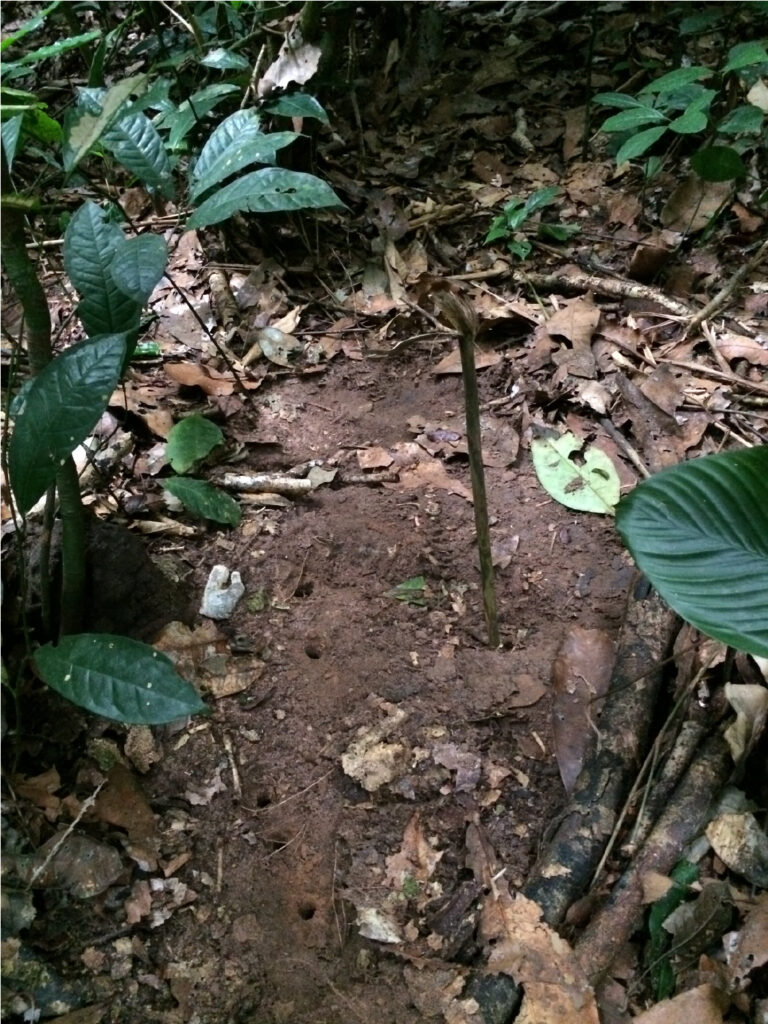 The surface of the subterranean termite nest is covered by holes where chimpanzees have inserted puncturing sticks through the soil. One stick remains partially inserted. Photo: Crickette Sanz

We know certain individuals prefer particular mounds within the core areas of their home range, but today we are working in a border area between two chimpanzee communities, making it uncertain who might be visiting the mound we just found. As we prepare our remote camera for set up, I am already looking forward to next month, when we will return to refresh the camera batteries and retrieve the footage, each batch of which provides a new glimpse into the lives and technological traditions of chimpanzees in this region.

From the Field
Leakey Foundation grantee Shannon Mc Farlin sends an update from the Bwindi Impenetrable National Park in Uganda where she has been cataloging the skeletal remains of mountain gorillas.
« From the Field: Brenna Henn, South Africa
From the Field: Lauren Michel, Rusinga Island, Kenya »
« BACK TO BLOG