From the Field: Sofya Dolotovskaya, Peru

Sofya Dolotovskaya of the German Primate Center was awarded a Leakey Foundation Research Grant during our spring 2018 cycle for her project entitled “Does pair-living translate into genetic monogamy in a Neotropical primate?” 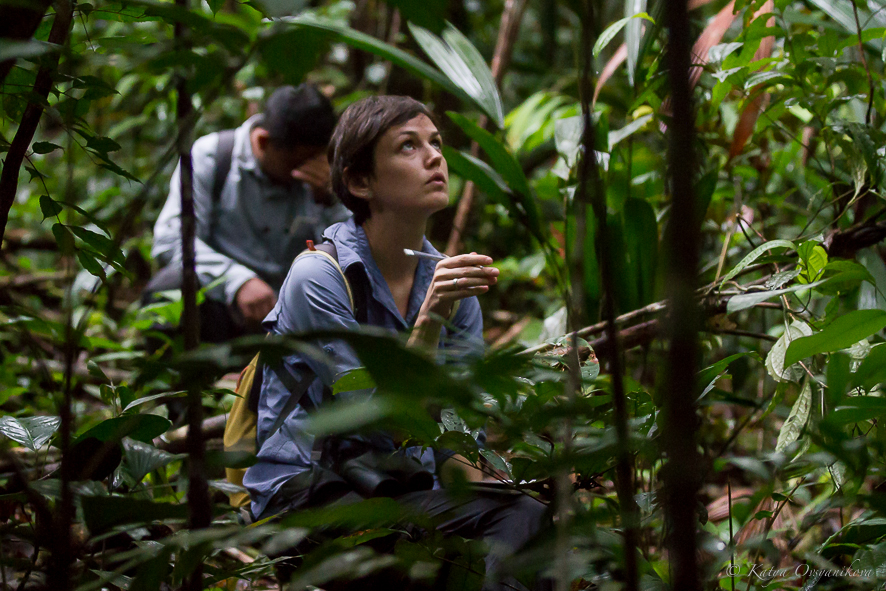 I’m now back from my second and last field season in Peru, where I was studying red titi monkeys. My field site, Estación Biológica Quebrada Blanco (EBQB), is located in north-eastern Peruvian Amazon, in the middle of nowhere. The closest village consists of just four families, and the station can be only reached by boat, which makes it a very isolated and peaceful place. Altogether, I spent 14 months doing fieldwork, and it has been an absolutely amazing experience. 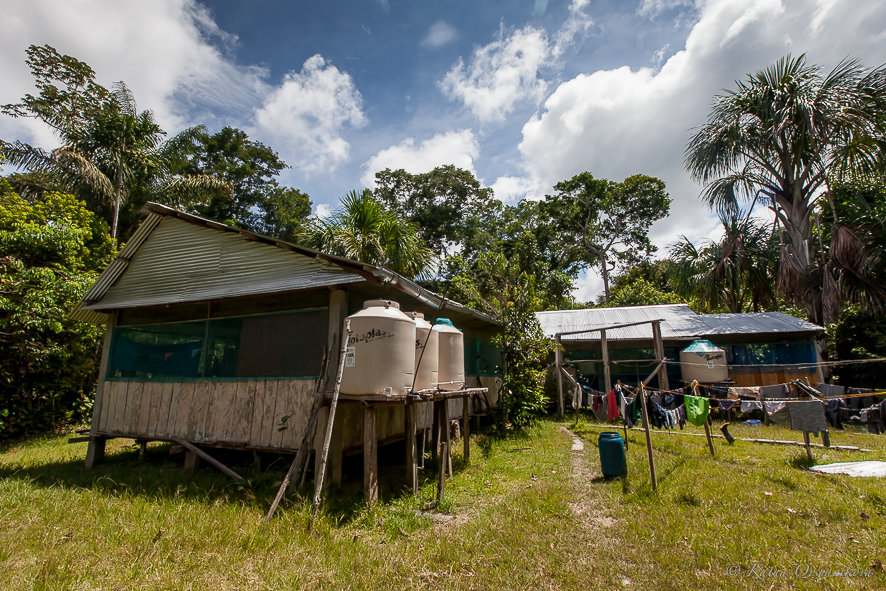 The camp at Estación Biológica Quebrada Blanco was Sofya Dolotovskaya’s home for her 14 months of fieldwork in a remote area of the Peruvian Amazon. Photo by Katya Ovsyanikova. 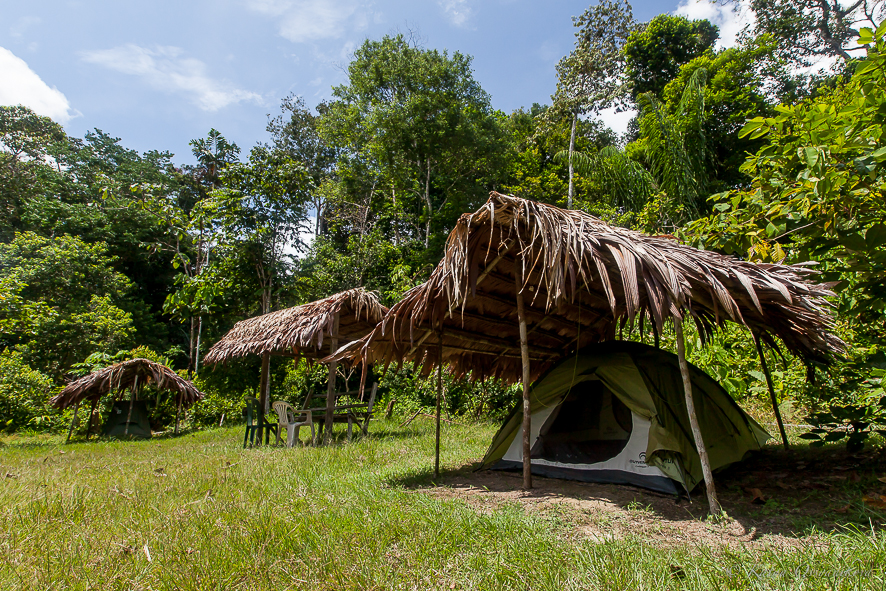 My research investigates genetic and behavioral aspects of pair-living in titi monkeys — a textbook example of a “monogamous” primate. To see if social monogamy translates into genetic monogamy in my species, I collected fecal samples, which I will then use to run paternity analyses using microsatellite genotyping. Apart from that, I’m interested in the behavioral mechanisms of monogamy maintenance and in the benefits of pair-living and pair-bonding for males and females. Which sex is more involved in maintaining pair bonds and defending the group territory? Is the strength of pair bonds affected by reproductive period, demographic changes or seasonality? To answer these questions, I collected behavioral data with the special focus on the social interactions of adult male and female of each group and on the intergroup encounters. 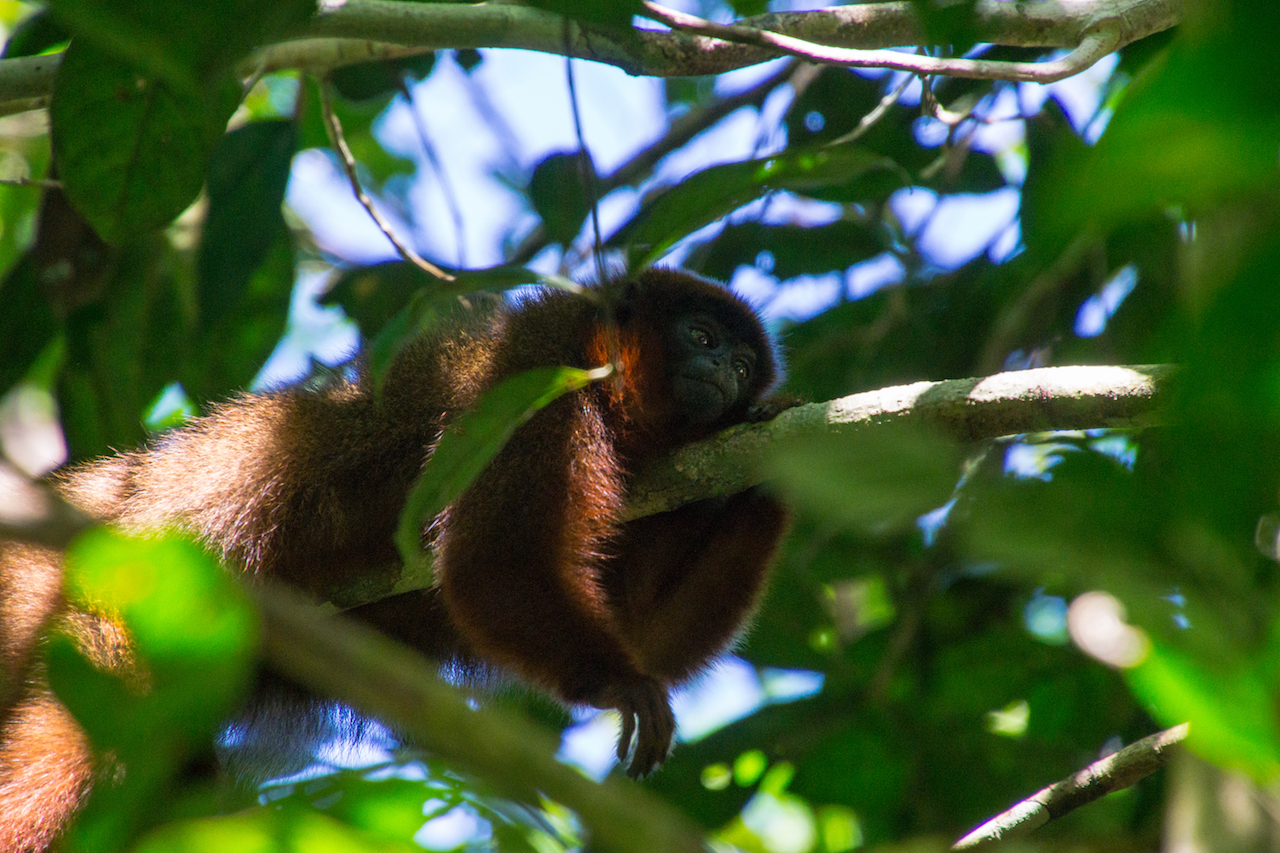 A titi monkey relaxing in the trees. Photo by Sofya Dolotovskaya.

Thanks to The Leakey Foundation, I was able to hire many local field assistants, which allowed me to habituate new groups of titis and to collect all the data I planned to (and even a bit more). Starting with just one habituated group back at the beginning of my first field season in 2017, we eventually habituated 10 new groups of titis.

Habituation didn’t always go smoothly, as the groups were very different in their reaction to people. With some of the groups, it took only weeks for the monkeys to fully accept us and to completely ignore our presence. But some groups were just as skittish after many months of habituation attempts as they had been in the beginning; with one especially “bad” group, we had to eventually give up after 8 months of trying. This difference still puzzles me, as it cannot be explained by either groups’ proximity to the camp or the habitat structure, nor by the possible prior exposure to hunting. However, other researchers at EBQB had very similar experience 20 years ago. One of the groups they were trying to habituate was still running from them after several months — and interestingly, it was located in the same area as our “bad” group. At the same time, they could easily habituate one group whose home range corresponds to one of our “good” groups. Since the monkey generations have surely changed since then, this pattern might have something to do with genetic traits (individual variation) — and also might tell us something about the dispersal patterns in titis. 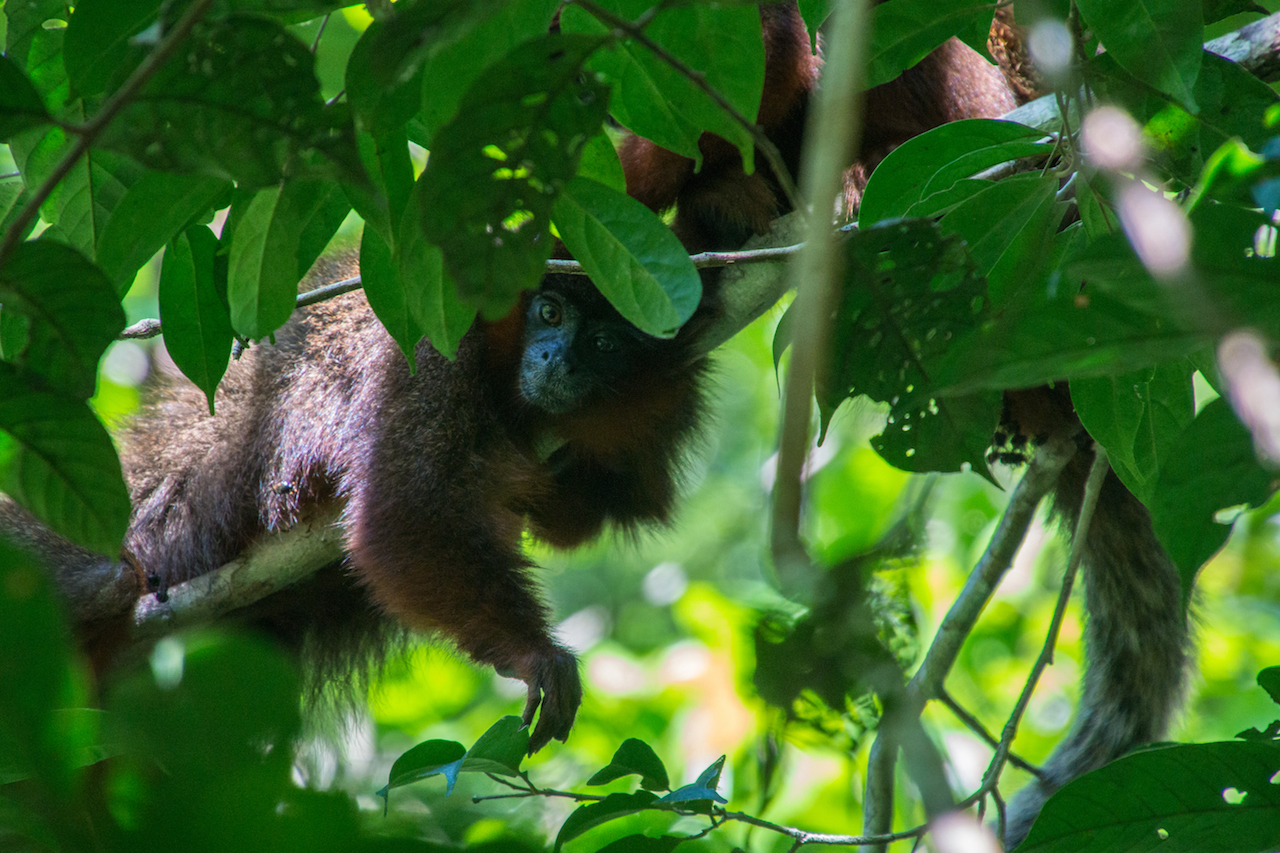 Titi monkeys resting in the dense canopy. These shy monkeys are not easy to observe. Photo by Sofya Dolotovskaya.

Following the habituated groups was not always easy: Titis are among the shyest and most discreet of all monkeys, the groups are small (groups consist of a breeding pair and 1-3 offspring), and they can easily sneak away without making any noise if they feel like it. They often spend several hours in a row resting in a dense canopy (no doubt the reason they used to be considered one of the most “boring” monkeys until recently), and the frustration an observer feels then is hard to describe. Nevertheless, I was lucky to collect behavioral data from 7 best-habituated groups. I observed changes in groups composition (dispersal of subadults, the formation of a new family group and the births of infants), witnessed many intergroup interactions, saw encounters with predators, and got some interesting results on the changes in pair bonds and sex differences in monogamy maintenance behavior. 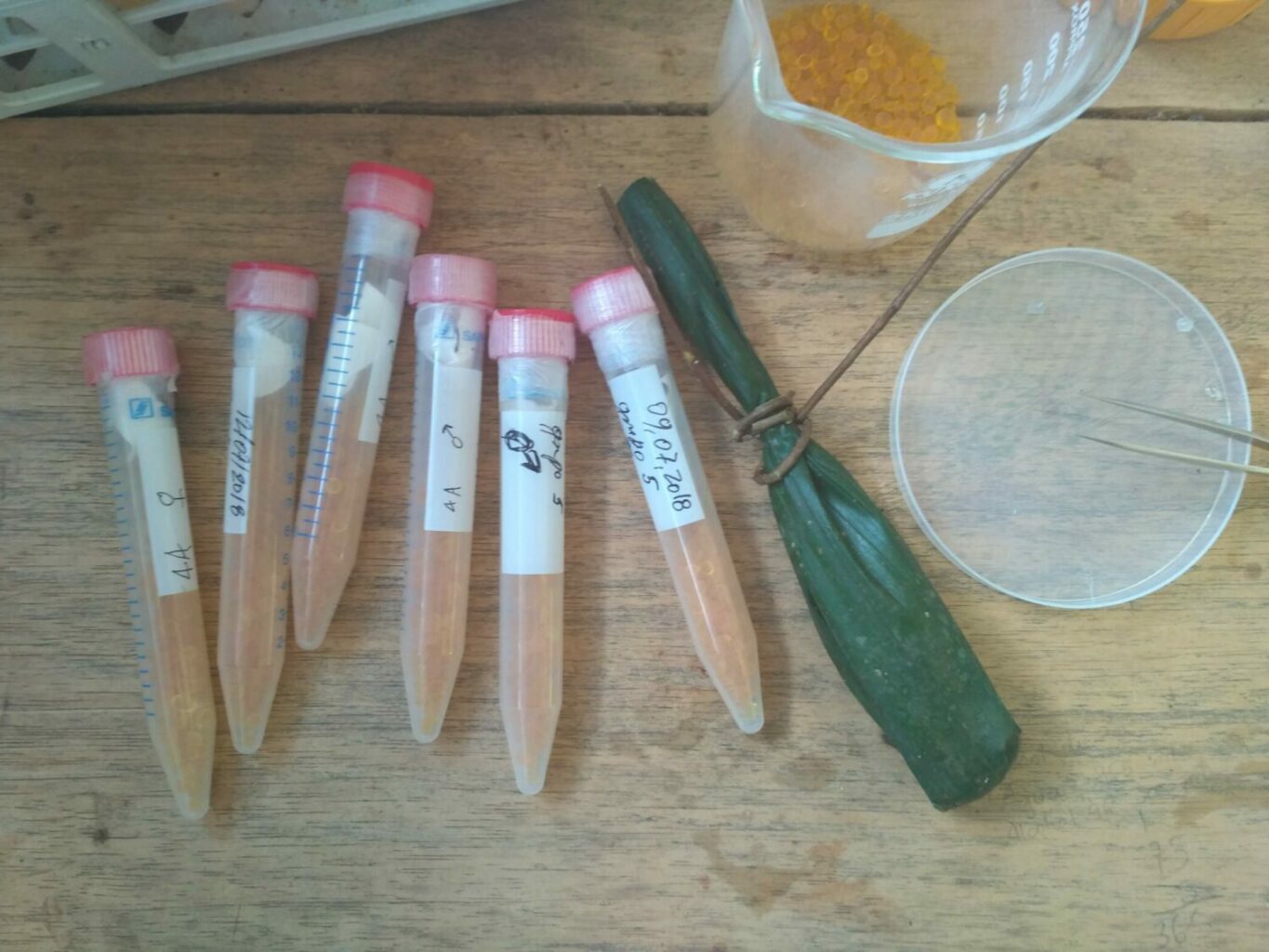 Precious samples being prepared for travel and testing. Photo by Sofya Dolotovskaya.

I was lucky with sample collection, too, and I got samples for 13 family groups. Some of our groups are from across the river, and some are quite distant from the others, which is quite interesting for the analysis of spatial genetic structure and dispersal patterns. Now I’m back at the German Primate Center (DPZ) doing lab work (and missing being in the field). As people working with fecal samples may well know, getting sufficient DNA from feces can be very tricky. After some struggling, I was finally able to get rid of PCR inhibitors and now can move on to microsatellite genotyping and mitochondrial DNA sequencing for paternity, relatedness, and spatial genetic structure analyses.

Category: : From the Field

From the Field
Leakey Foundation grantee Shannon Mc Farlin sends an update from the Bwindi Impenetrable National Park in Uganda where she has been cataloging the skeletal remains of mountain gorillas.
« From the Field: Deming Yang, Kenya
From the Field: Chris Gilbert, India »
« BACK TO BLOG