The Rise of Culture and the Fall of Testosterone

In a paper published in the journal Current Anthropology, a team of researchers funded by The Leakey Foundation explore the biological basis of the technology boom and expansion of culture that happened 50,000 years ago.

DURHAM, N.C. — Modern humans appear in the fossil record about 200,000 years ago, but it was only about 50,000 years ago that making art and advanced tools became widespread.

A new study appearing Aug. 1 in the journal Current Anthropology finds that human skulls changed in ways that indicate a lowering of testosterone levels at around the same time that culture was blossoming.

“The modern human behaviors of technological innovation, making art and rapid cultural exchange probably came at the same time that we developed a more cooperative temperament,” said lead author Robert Cieri, a biology graduate student at the University of Utah who began this work as a senior at Duke University. 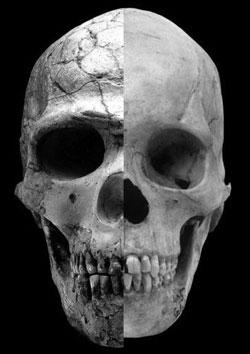 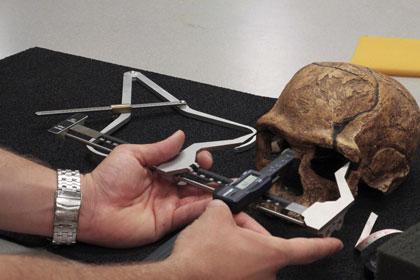 The study, which is based on measurements of more than 1,400 ancient and modern skulls, makes the argument that human society advanced when people started being nicer to each other, which entails having a little less testosterone in action.

Heavy brows were out, rounder heads were in, and those changes can be traced directly to testosterone levels acting on the skeleton, according to Duke anthropologist Steven Churchill, who supervised Cieri’s work on a senior honors thesis that grew to become this 24-page journal article three years later.

What they can’t tell from the bones is whether these humans had less testosterone in circulation, or fewer receptors for the hormone.

The research team also included Duke animal cognition researchers Brian Hare and Jingzhi Tan, who say this argument is in line with what has been established in non-human species.

In a classic study of Siberian foxes, animals that were less wary and less aggressive toward humans took on a different, more juvenile appearance and behavior after several generations of selective breeding.

“If we’re seeing a process that leads to these changes in other animals, it might help explain who we are and how we got to be this way,” said Hare, who also studies differences between our closest ape relatives — aggressive chimpanzees and mellow, free-loving bonobos.

Those two apes develop differently, Hare said, and they respond to social stress differently. Chimpanzee males experience a strong rise in testosterone during puberty, but bonobos do not. When stressed, the bonobos don’t produce more testosterone, as chimps do, but they do produce more cortisol, the stress hormone.Their social interactions are profoundly different and, relevant to this finding, their faces are different, too. “It’s very hard to find a brow-ridge in a bonobo,” Hare said. 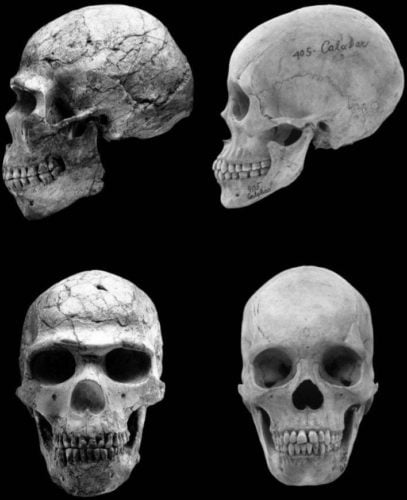 (Craniofacial feminization in Homo sapiens. The 110-90 Ka year old male specimen Skhul 5 (left) in lateral (top) and frontal (bottom) views, compared to that of a recent African male (right), showing the large brow ridges and long and narrow, masculinized face characteristic of MSA/MP-associated modern humans. Both specimens have been scaled to the same nasion-bregma height and aligned on those landmarks. Photo credit- David Brill, used with permission. From Craniofacial Feminization, Social Tolerance, and the Origins of Behavioral Modernity by Cieri et al.)

Cieri compared the brow ridge, facial shape and interior volume of 13 modern human skulls older than 80,000 years, 41 skulls from 10,000 to 38,000 years ago, and a global sample of 1,367 20th century skulls from 30 different ethnic populations.The trend that emerged was toward a reduction in the brow ridge and a shortening of the upper face, traits which generally reflect a reduction in the action of testosterone.

There are a lot of theories about why, after 150,000 years of existence, humans suddenly leapt forward in technology. Around 50,000 years ago, there is widespread evidence of producing bone and antler tools, heat-treated and flaked flint, projectile weapons, grindstones, fishing and birding equipment and a command of fire. Was this driven by a brain mutation, cooked foods, the advent of language or just population density?

The Duke study argues that living together and cooperating put a premium on agreeableness and lowered aggression and that, in turn, led to changed faces and more cultural exchange.

“If prehistoric people began living closer together and passing down new technologies, they’d have to be tolerant of each other,” Cieri said. “The key to our success is the ability to cooperate and get along and learn from one another.”

This article is a news release from the Duke University Office of News and Communications.

Work funded by The Leakey Foundation, NSF, and the University of Iowa Orthodontics Department. 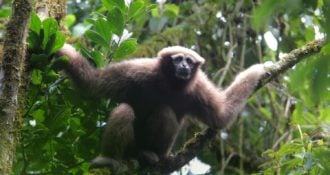 Education
In honor of International Gibbon Day, here are five fun facts about our gibbon cousins and one fact that's no fun at all.
SEE MORE 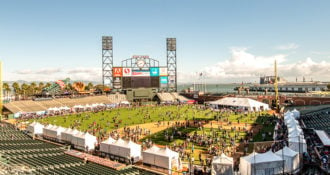 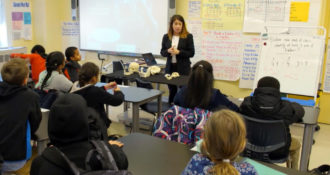 Scientists in the Classroom

Video, Education
Dr. Erin Vogel is a four-time Leakey Foundation grant recipient who has shared her research with over 250 students through The Leakey Foundation’s classroom visit program.
« Behind the Science: C3 or C4, Which One Are You?
Animated Life: Mary Leakey »
« BACK TO BLOG