Behind the Science: C3 or C4, Which One Are You?

This is the first in a series of articles written for those of you who might appreciate a little extra background information on the science behind some of the projects we share with you. Enjoy!

In this year’s Spring/Summer AnthroQuest we describe how Getty Grant recipient Thure Cerling is using stable isotope analysis of tooth enamel from fossil primates in order to determine the percentages of C
3
and C
4
plants that contributed to the their diets, and in December Oliver Paine updated us on his team’s progress in
analysing the mechanical and nutritional properties of C4 plants in savannah habitats
. Though these projects approach the questions from somewhat different angles, they will undoubtedly help us gain a greater understanding of early hominin diets, behavior and environment. Perhaps we should take this opportunity to review some of the basic science behind the study of C
3
and C
4
plants as they relate to human evolution.

Carbon: The Building Block of Life If an isotope is stable, then unless some outside force acts upon it, this isotope will sit around and do its thing, stably, forever. Unstable isotopes (or radioisotopes) will not. They will emit energy in the form of ionizing radiation until this instability is sufficiently resolved. The end result may be a more stable isotope of the same element or even another element altogether. This is the process behind what we call radioactive decay.

Of the naturally occurring carbon isotopes, one of them is a radioisotope called 14C. (The 14 tells us that the atom contains the usual 6 electrons, 6 protons and 6 plus an additional 2 neutrons.) This radioisotope exists in trace amounts and is mainly created when carbon atoms in the upper atmosphere encounter cosmic radiation. It takes in the thousands of years for this isotope to decay into a stable nitrogen atom (14N).

It is interesting to note that the decay of 14C provides scientists with a useful tool in dating biological material, otherwise known as radiocarbon dating. By measuring the percentage of 14C remaining in non-living biological material and comparing these numbers to known values of the environment, one can estimate the age of this material. (Remember, once an animal or plant is dead, it would not be incorporating new
14C into its body.)

12C and 13C are the stable isotopes of carbon. 12C exists much more abudnantly on earth at 99%. Except for the trace amounts of 14C, 13C makes up the rest. Also, it turns out that these isotopes are utilized in different amounts by C3 and C4 plants.

We should probably go back to our high school science classes, all the way back to the chapter on photosynthesis. This is the biochemical process by which plants use the sun’s energy, water (H2
O) and carbon dioxide (CO2) to create sugar, otherwise known to us animals as food. The process by which the inorganic CO2 is integrated into an organic sugar is called carbon fixation, and C3 and C4 plants “fix” the carbon in different manners. C3 plants are by far the most common type of plant on earth (~95%). They mostly live in environments with a moderate amount of sunlight, moderate temperatures and plenty of water, and they use the C
3 carbon fixation pathway (or Calvin cycle) to integrate the CO2 into a three carbon sugar, hence C3.

Except for humans, modern primates have a mostly C3 derived diet. They eat a range of foods (fruits, insects, leaves), all similar to those foods that would be sourced from a tropical canopy. C4 plants (tropical grasses and sedges) use the C4 carbon fixation pathway (often referred to as the Hatch-Slack pathway) to incorporate CO2 and H2O into a four carbon molecule. This process takes more energy than C3 fixation; however, C4 fixation is more efficient when it comes to its utilization of H2O and CO2. Therefore C4 plants typically live in environments with more sun (open environments), longer growing seasons and less water. The C4 pathway is a relatively recent adaptation, probably arising due to changing environment.

What do humans eat? Our diets consist of about 50% C4
derived foods. Corn, millet and rice are examples. We also eat the meat of animals that graze upon C4 plants.

So yes, it makes sense that plants have adapted to different environments. In turn, animals have adapted as well, but what about these carbon isotopes?

As I mentioned, C3 and C4 plants utilize different amounts of the 12C and 13C isotopes. This means that their bodies contain different ratios of these isotopes. For example, C3 plants have less 13C in their tissue than compared to what naturally occurs in the atmosphere. C4 also have less 13C, but this “fractionation” is less severe. This is all due to the manner in which these plants fix carbon. The biochemical pathways have differing affinities for the lighter and heavier isotopes. Without getting too deep into the chemistry, this is due to the fact that 12C can “slide” through the C3 pathway more easily than 13C can. Same is true with the C4 pathway, just not as much. The result is that the isotopic signatures of these plants are different, and the 13C/12C ratios can be measured using isotope-ratio mass spectronomy, which can measure the known behaviors of these isotopes.

Please note, I have left out CAM plants, which utilize both carbon fixation pathways. These types of plants are usually restricted to desert environments.

Let us return to the two projects that began this conversation. Dr. Cerling is examining the 13C/12C ratios in the tooth enamel of fossil primates from Kenya. Though the ratio in tooth enamel is not exactly the same as that of the diet of the animal, this “enrichment” percentage is known, and Dr. Cerling will be able to determine the relative amounts of C3 and C4
derived food in the diet of these primates.

I keep saying derived because there are limitations to this analysis. You cannot determine whether the animal got this 13C/12C ratio from eating C3 and C4 plants or if it ate meat of an animal that ate such plants or if it was a combination of the two. However, this ratio does give us information on where these animals derived their food. As we have now learned, these C3 and C4 plants grow in dissimilar environments.

So, this begs the question, what exactly did they eat? If our ancestors were roaming savanna habitats through different seasons, what types of plants might they have eaten at different times? What parts of the plants might they have focused their attention, and how would they have satisfied their energetic requirements on such a diet? Oliver Paine’s project will help us begin to answer these and many more questions.

As you can see, a great amount can be learned by utilizing the properties of C3 and C4 plants as a tool to investigate the diets and environment of our early ancestors and relatives. We look forward to sharing the the results of these and other scientists in the time to come!

Journal Article, Behind the Science
Dozens of non-human primate species, including our closest relatives, are at risk for SARS-CoV-2 infection and are vulnerable to COVID-19, which could have devastating impacts on populations of primates that are already endangered.
SEE MORE 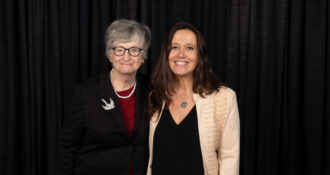 The Leakey Foundation, Behind the Science
Science is a collaborative endeavor and long-term projects require the work of multiple generations of researchers. At the 2019 meeting of the American Association of Physical Anthropologists, The Leakey Foundation set out to document the academic "families" of biological anthropology. All of the portraits are now available on our website. 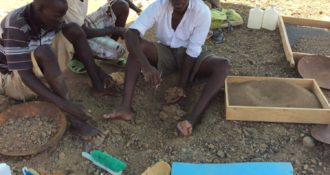 Questions and Answers About Alesi

Journal Article, In the News, Behind the Science
Research findings on 'Alesi,' a newly discovered  13 million-year-old fossil ape species, were published this week in the journal Nature and the story has been widely carried in the press. The research team behind the Nyanzapithecus alesi discovery has collaborated to put together this list of questions and answers.
« Extracting Ancient Dental DNA: Just Like Pulling Teeth
The Rise of Culture and the Fall of Testosterone »
« BACK TO BLOG