Researchers from the National Museums of Kenya, University of Arkansas, University of Missouri and Duke University have announced the discovery of a tiny monkey that lived in Kenya 4.2 million years ago.

This is a typical guenon (Allenopithecus), left, compared to how large Nanopithecus browni, middle, would have been. Typical domestic cat included for scale comparison. Illustration by Carol Ward.

Nanopithecus browni was about the size of a cottontail rabbit, the same size as a modern talapoin monkey, the smallest living Old World monkey species that weighs only 2 to 3 pounds. Talapoins are part of a large group of monkeys called guenons, which are commonplace and widespread across Africa today. Most species are several times larger in size than Nanopithecus browni.

Guenon evolution is poorly understood but thought to be driven by changes in forest habitats, with the distribution of modern species reflecting the breakup and re-convergence of ancient forests. Talapoins live only in West Central Africa, are confined to tropical forests, and are thought to be dwarfed from a larger ancestor in response to life in woody, swampy habitats.

Nanopithecus browni, though, was found in Kenya on the eastern side of the continent at a site called Kanapoi. The Kanapoi habitat was dry and covered with grasslands and open forests – a very different place from the tropical forests of Cameroon and Gabon in West Central Africa. It is also at Kanapoi where remains of some of the earliest human ancestors, Australopithecus anamensis, have been found and would have lived alongside Nanopithecus browni. 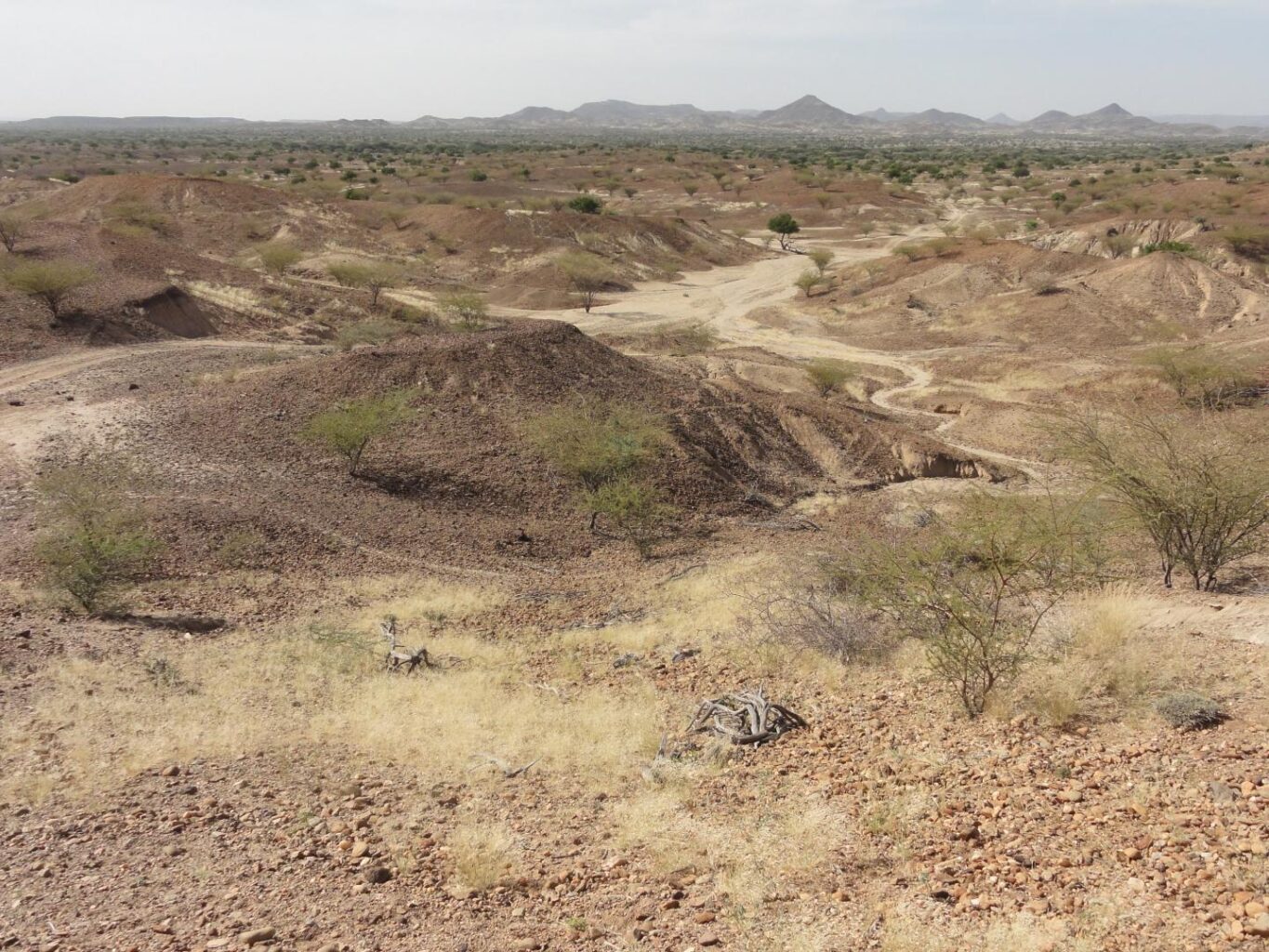 Nanopithecus browni is the second oldest guenon found so far, just younger than the guenon single tooth found 10 years ago on the Arabian Peninsula. The ancient date, combined with a habitat so different and so far away from that of modern talapoins, reveals a much more complex evolution of guenon monkeys than previously thought. This new enigmatic member of the primate family reveals that dwarfing occurred far longer ago than scientists suspected and may have happened more than once and in very different habitats perhaps for different reasons.

Nanopithecus browni was discovered by the West Turkana Paleo Project, led by Fredrick Kyalo Manthi of the National Museums of Kenya, with project co-leaders Carol Ward of the University of Missouri and Michael Plavcan of the University of Arkansas. The fossils were analyzed in collaboration with Richard Kay of Duke University. The West Turkana Paleo Project is funded in part by The Leakey Foundation.

The fossil is housed at the National Museums of Kenya. The researchers published their findings in the Journal of Human Evolution.

“Nanopithecus browni is named after the late Prof. Francis H. Brown (University of Utah) for his enormous contribution to understanding the geological history of the Omo-Turkana Basin within which the Kanapoi site is situated,” said Dr. Fredrick Kyalo Manthi, a Leakey Foundation Baldwin Fellow and Grantee, who was mentored by Prof. Brown.

“The discovery of Nanopithecus browni reaffirms Kenya’s contribution to understanding the evolution and diversity of Pliocene fauna and the environmental contexts in which they lived,” said Manthi. “Environmental changes during the Plio-Pleistocene may have influenced the present-day distribution of guenons.”

The Leakey Foundation is proud to announce the Francis H. Brown African Scholarship Fund for East African researchers and students pursuing research in the areas of botany and the earth sciences. Click here to learn more and apply.

Journal Article, Behind the Science
Dozens of non-human primate species, including our closest relatives, are at risk for SARS-CoV-2 infection and are vulnerable to COVID-19, which could have devastating impacts on populations of primates that are already endangered.
« Ancient Saharan Seaway Illustrates How Earth’s Climate and Creatures Can Undergo Extreme Change
Early Hominins Grew Their Spinal Columns Like Modern Humans »
« BACK TO BLOG