A new paper to be published in the Bulletin of the American Museum of Natural History integrates 20 years of research by a diverse scientific team and describes the ancient Trans-Saharan Seaway of Africa that existed 50 to 100 million years ago in the region of the current Sahara Desert. Led by Maureen O’Leary, Professor of Anatomical Sciences at the Renaissance School of Medicine at Stony Brook University, and supported in part by The Leakey Foundation, the paper is a comprehensive synthesis and contains the first reconstructions of extinct aquatic species in their habitats along the seaway and places in context massive climate and sea level changes that can occur on Earth.

For a description of the research and fossil finds:

The region now holding the Sahara Desert was once underwater, in striking contrast to the present-day arid environment. This dramatic difference in climate over time is recorded in the rock and fossil record of West Africa during a time range that extends through the Cretaceous-Paleogene (KPg) boundary. West Africa was bisected by a shallow saltwater body that poured onto continental crust during a time of high global sea level. The Bulletin paper involves an assessment and continued analysis of three expeditions led by Professor O’Leary (1999, 2003, and 2008) within rock exposures in the Sahara Desert in Mali, and subsequently, the laboratory work of the fossil finds in the region. 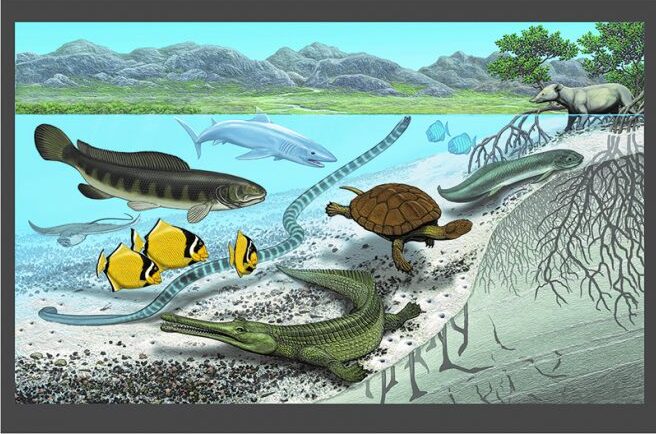 An illustration of the Sahara Seaway and its animals. Illustration by Carl Buell.

“Fossils found on the expeditions indicate that the sea supported some of the largest sea snakes and catfish that ever lived, extinct fishes that were giants compared to their modern-day relatives, mollusk-crushing fishes, tropical invertebrates, long-snouted crocodilians, early mammals and mangrove forests,” explained Professor O’Leary, who is also a Research Associate in the Division of Paleontology, American Museum of Natural History. “Because the seaway changed in size and geography frequently, we propose that it may have resulted in ‘islands of water’ that stimulated species gigantism.”

The paper contains the first reconstructions of ancient relatives of elephants and large apex predators such as sharks, crocodilians and sea snakes.

“With our analysis and new technologies, such as a computer-aided map of the seaway, our work is an important step toward increasing our understanding of the KPg boundary event, the time of non-avian dinosaur extinction,” said Professor O’Leary.

She and colleagues point out that the paper places in context climate and sea level changes that can occur on Earth.

For example, scientists currently predict that climate change will cause seas to rise two meters by the end of the 21st century. The study in the Bulletin describes how, in the Late Cretaceous, sea level rise far exceeded that which is predicted by human-induced climate change. In the Late Cretaceous sea level was 300m higher than the present – 40 percent of current land was underwater, which is very different from today. This shows the dynamic nature of our planet.

O’Leary explained that scientists do not have detailed stratigraphic terrestrial/nearshore sections with fossils on every continent to examine exactly how the KPg boundary unfolded globally. There is only one good nearshore or terrestrial section with vertebrate fossils in the western United States. The expeditions in Mali, she added, created a new section, which is imperfect, missing some of the earliest Paleogene yet contributes to a better understanding of global events 50 to 100 million years ago.

The excavations and research conducted by O’Leary and her international colleagues has spanned 20 years. The collaborative research team consists of paleontologists and geologists from the United States, Australia and Mali.

“Few paleontologists had worked the region, given its remoteness and scorching 125 degree F temperatures. The shifting sand dunes made it difficult to find rocky outcrops, and worse still, a flash rain storm flooded the roadways making navigation nearly impossible,” said Leif Tapanila, PhD, Professor Geosciences at Idaho State University and a co-author of the paper. “These expeditions could not have succeeded without the experience of local Malian drivers and guides, and I was amazed by the quality and diversity of marine fossils we found in the Sahara Desert.”

The research was funded by The Leakey Foundation, the National Science Foundation (SGER Award: 0827993), the National Geographic Society, the American Museum of Natural History, and Idaho State University.

This article was first published by Stony Brook University. Read the original here.

Journal Article, Behind the Science
Dozens of non-human primate species, including our closest relatives, are at risk for SARS-CoV-2 infection and are vulnerable to COVID-19, which could have devastating impacts on populations of primates that are already endangered.
« Bonobo Diet of Aquatic Greens May Hold Clues to Human Evolution
Fossil of Smallest Old World Monkey Species Discovered in Kenya »
« BACK TO BLOG