Deep in the remote forests of Borneo lives a society of hunter-gatherers who speak a language never before shared with outsiders, until now.

The latest episode of Origin Stories tells the story of the Cave Punan people and their urgent plea for help to save their forest home. This is the first time their story has been told to the outside world.

It was thought that the hunter-gatherer lifestyle had ended in Indonesia decades ago. In 2018, anthropologist and Leakey Foundation grantee Steve Lansing was in Borneo working on a long-term collaborative project to trace the origins of the indigenous people of Indonesia, when the elected leader of the Punan invited him to come and meet a community of Punan people who were living as hunter-gatherers in a network of caves. They are called the Punan Batu or Cave Punan.

On the first night he spent with the Cave Punan people, as he settled down to sleep in his tent, Lansing heard singing from inside the cave. The singing sounded different than the language the people spoke during the day. What he heard was the song language of the Cave Punan, and it is a language that seems to be unique in all the world. They also told him about another language, a “stick language” that is used to send messages with sticks and leaves.

Lansing soon learned that the Cave Punan had invited him for a reason. Palm oil plantations are rapidly encroaching on their territory, and they need help to stop it.

There are around 50 families of Cave Punan people. They are mobile hunter-gatherers who travel along a network of caves, following the seasons of fruiting trees, animals, and wild honey. Meat is shared by everyone, and so are the plants they gather. Everyone in the group gets what they need. Lansing says the Cave Punan’s level of sharing is unlike any he has ever encountered.

Since first meeting the Cave Punan, Lansing has stepped down from his academic positions to focus his energy on helping them protect their forest and their way of life.

He and his team have begun working with the Yayasan Konservasi Alam Nusantara, the Indonesian affiliate of The Nature Conservancy, on a plan to support the Punan Batu. We will keep you updated as to how you can help.

This video is of Ogot, an elder and well-respected member of the community. He is singing in the Song Language inside the Great Cave. Ogot’s song sends a message about the plight of his people and his hope that their forest can be saved.

Thanks to Steve Lansing and his colleagues Guy Jacobs, Steve Kuhn, Pradiptajati Kusuma, Hera Sudoyo and Safarina Malik for sharing their work.

Learn about the peopling of Indonesia and how ancestry is traced using genetics and linguistics.

Origin Stories
In this episode of our Origin Stories podcast, Leakey Foundation grantee Bence Viola tells the story of the Denisovans. This group of archaic humans was first discovered through a tiny fragment of a pinky bone found in a Siberian cave. Ancient DNA inside the fossil hid a previously unknown history of humankind. Now new research is uncovering more information about the mysterious Denisovans.
SEE MORE 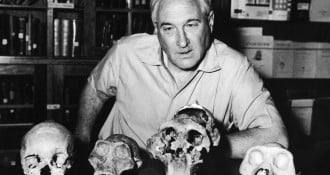 Origin Stories, From the Archive
In the final installment of our "From the Archive" series, Kenyan paleoanthropologist Louis S.B. Leakey shares the story of his life and work in a never-before-released interview recorded in 1969.
« Origin Stories: The Denisovans
« BACK TO BLOG