The Leakey Foundation is proud to have funded the discovery of the most complete Miocene ape skull in the fossil record. The Foundation has awarded a total of 29 research grants to the international research team led by Isaiah Nengo. 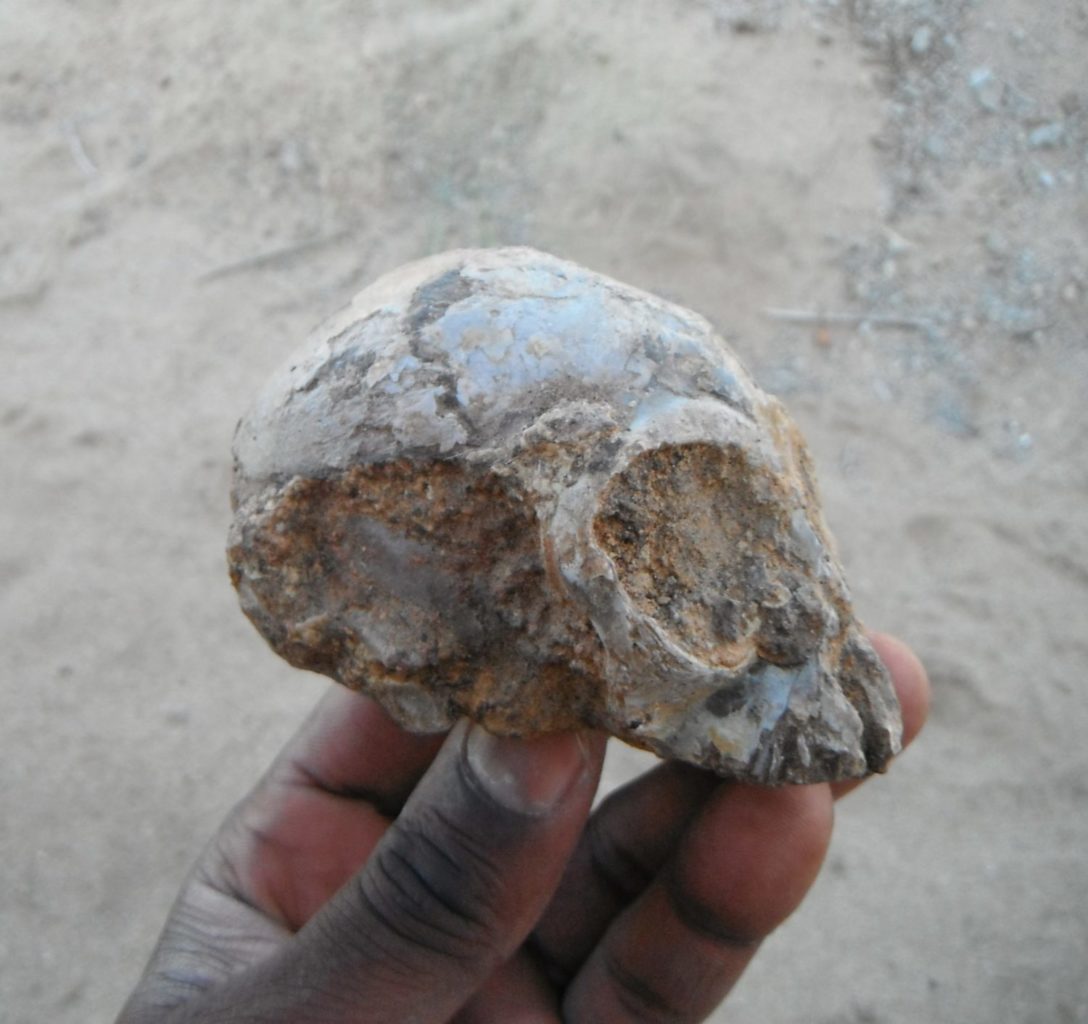 The discovery in Kenya of a remarkably complete fossil ape skull reveals what the common ancestor of all living apes and humans may have looked like. The find, announced in the scientific journal Nature on August 10th, belongs to an infant that lived about 13 million years ago. The research was done by an international team led by Leakey Foundation grantee Isaiah Nengo of Stony Brook University-affiliated Turkana Basin Institute and De Anza College, U.S.A.

Among living primates, humans are most closely related to the apes, including chimpanzees, gorillas, orangutans and gibbons. Our common ancestor with chimpanzees lived in Africa 6 to 7 million years ago, and many spectacular fossil finds have revealed how humans evolved since then.

In contrast, little is known about the evolution of the common ancestors of living apes and humans before 10 million years ago. Relevant fossils are scarce, consisting mostly of isolated teeth and partial jaw bones. It has therefore been difficult to find answers to two fundamental questions: Did the common ancestor of living apes and humans originate in Africa, and what did these early ancestors look like? 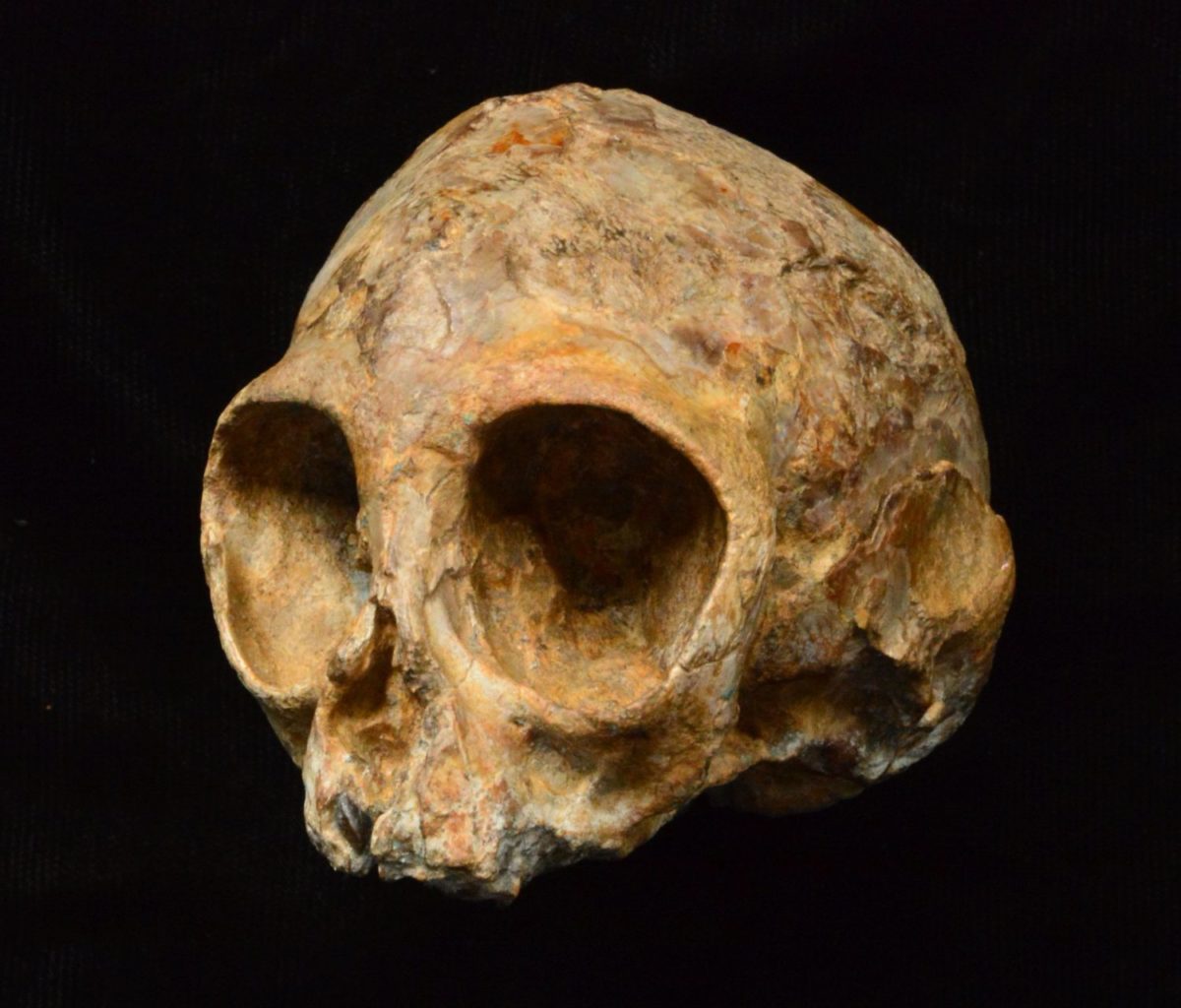 Now these questions can be more fully addressed because the newly discovered ape fossil, nicknamed Alesi by its discoverers, and known by its museum number KNM-NP 59050, comes from a critical time period in the African past. In 2014, it was spotted by Kenyan fossil hunter John Ekusi in 13 million year-old rock layers in the Napudet area, west of Lake Turkana in northern Kenya. “The Napudet locality offers us a rare glimpse of an African landscape 13 million years ago,” says Craig S. Feibel of Rutgers University-New Brunswick. “A nearby volcano buried the forest where the baby ape lived, preserving the fossil and countless trees. It also provided us with the critical volcanic minerals by which we were able to date the fossil.”

The fossil is the skull of an infant, and it is the most complete extinct ape skull known in the fossil record. Many of the most informative parts of the skull are preserved inside the fossil, and to make these visible the team used an extremely sensitive form of 3D X-ray imaging at the synchrotron facility in Grenoble, France. “We were able to reveal the brain cavity, the inner ears and the unerupted adult teeth with their daily record of growth lines,” says Paul Tafforeau of the European Synchrotron Radiation Facility. “The quality of our images was so good that we could establish from the teeth that the infant was about 1 year and 4 months old when it died.”

3D animation of the Alesi skull computed from the ESRF microtomographic data. It shows first the skull in solid 3D rendering, then transparent surface rendering is used to show the endocast shape (light blue), the internal ears (green) and the permanent teeth germs (grey and brown). © Paul Tafforeau / ESRF

The unerupted adult teeth inside the infant ape’s skull also indicate that the specimen belonged to a new species, Nyanzapithecus alesi. The species name is taken from the Turkana word for ancestor “ales.” “Until now, all Nyanzapithecus species were only known from teeth and it was an open question whether or not they were even apes,” notes John Fleagle of Stony Brook University.  “Importantly, the cranium has fully developed bony ear tubes, an important feature linking it with living apes,” adds Ellen Miller of Wake Forest University.

Alesi’s skull is about the size of a lemon, and with its notably small snout it looks most like a baby gibbon. “This gives the initial impression that it is an extinct gibbon,” observes Chris Gilbert of Hunter College, New York. “However, our analyses show that this appearance is not exclusively found in gibbons, and it evolved multiple times among extinct apes, monkeys, and their relatives.”

That the new species was certainly not gibbon-like in the way it behaved could be shown from the balance organ inside the inner ears. “Gibbons are well known for their fast and acrobatic behavior in trees,” says Fred Spoor of University College London and the Max Planck Institute of Evolutionary Anthropology, “but the inner ears of Alesi show that it would have had a much more cautious way of moving around.”

“Nyanzapithecus alesi was part of a group of primates that existed in Africa for over 10 million years,” concludes lead author Isaiah Nengo. “What the discovery of Alesi shows is that this group was close to the origin of living apes and humans and that this origin was African.” 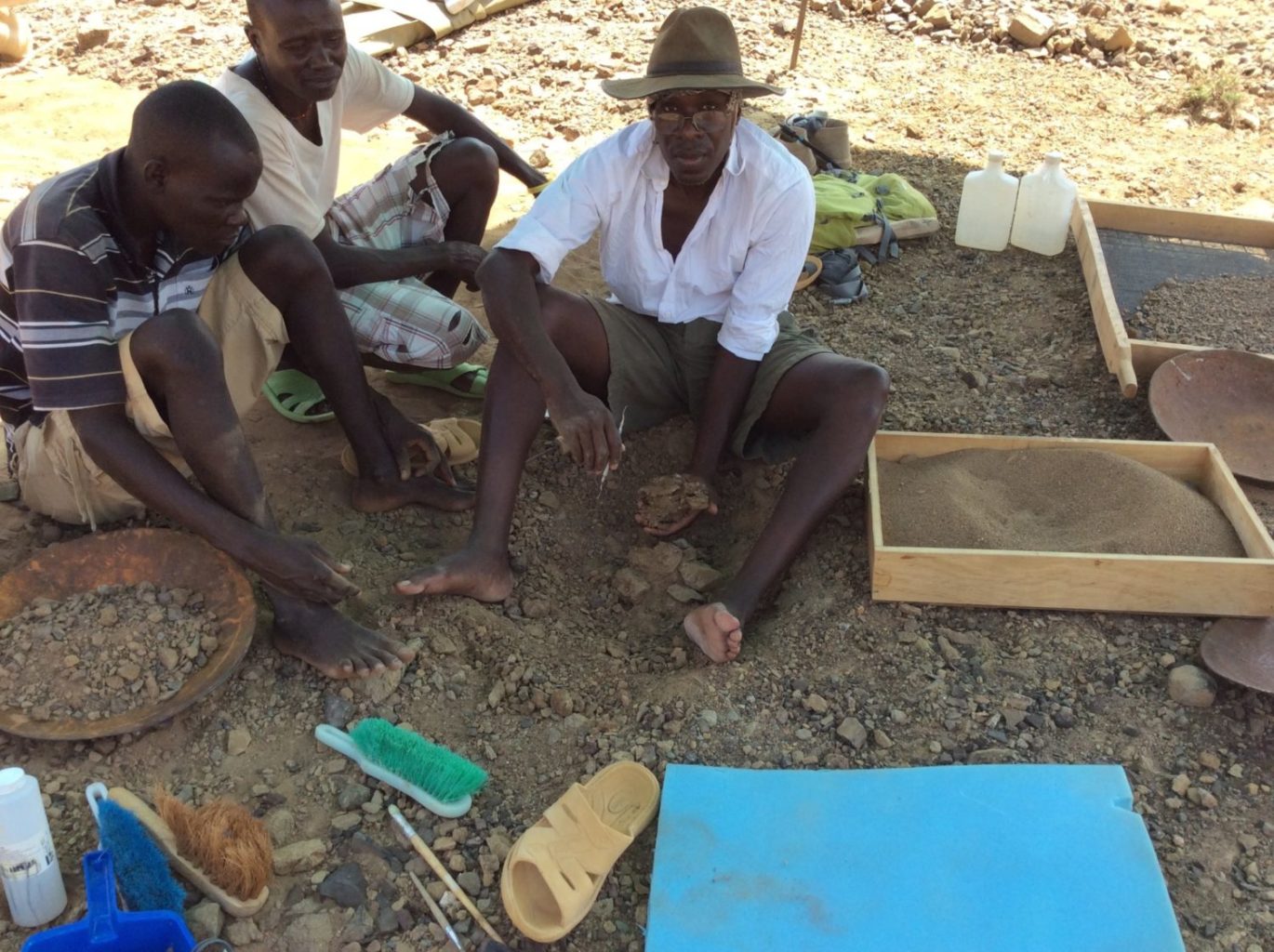 The work was supported by The Leakey Foundation and trustee Gordon Getty, the Foothill-De Anza Foundation, the Fulbright Scholars Program, the National Geographic Society, the European Synchrotron Radiation Facility and the Max Planck Society.

Your support made this discovery possible. Support the next big discovery! Your donation will be doubled.

Grants, In the News, The Leakey Foundation
The Leakey Foundation is proud to announce the Joan Cogswell Donner Field School Scholarship which will provide grants of up to $2,000 to students from countries where there are abundant scientific resources but limited resources for academic development.
SEE MORE

Journal Article
Teach a chimpanzee to fish for insects to eat, and you feed her for a lifetime. Teach her a better way to use tools in gathering prey, and you may change the course of evolution.