From the Field: Carrie Miller, Ethiopia

Carrie Miller is a PhD candidate from the University of Minnesota. She was awarded a Leakey Foundation Research Grant during our spring 2017 cycle for her project entitled “Does paternity certainty elicit protection and support of offspring by male gelada monkeys?” Here we have an update on her project. 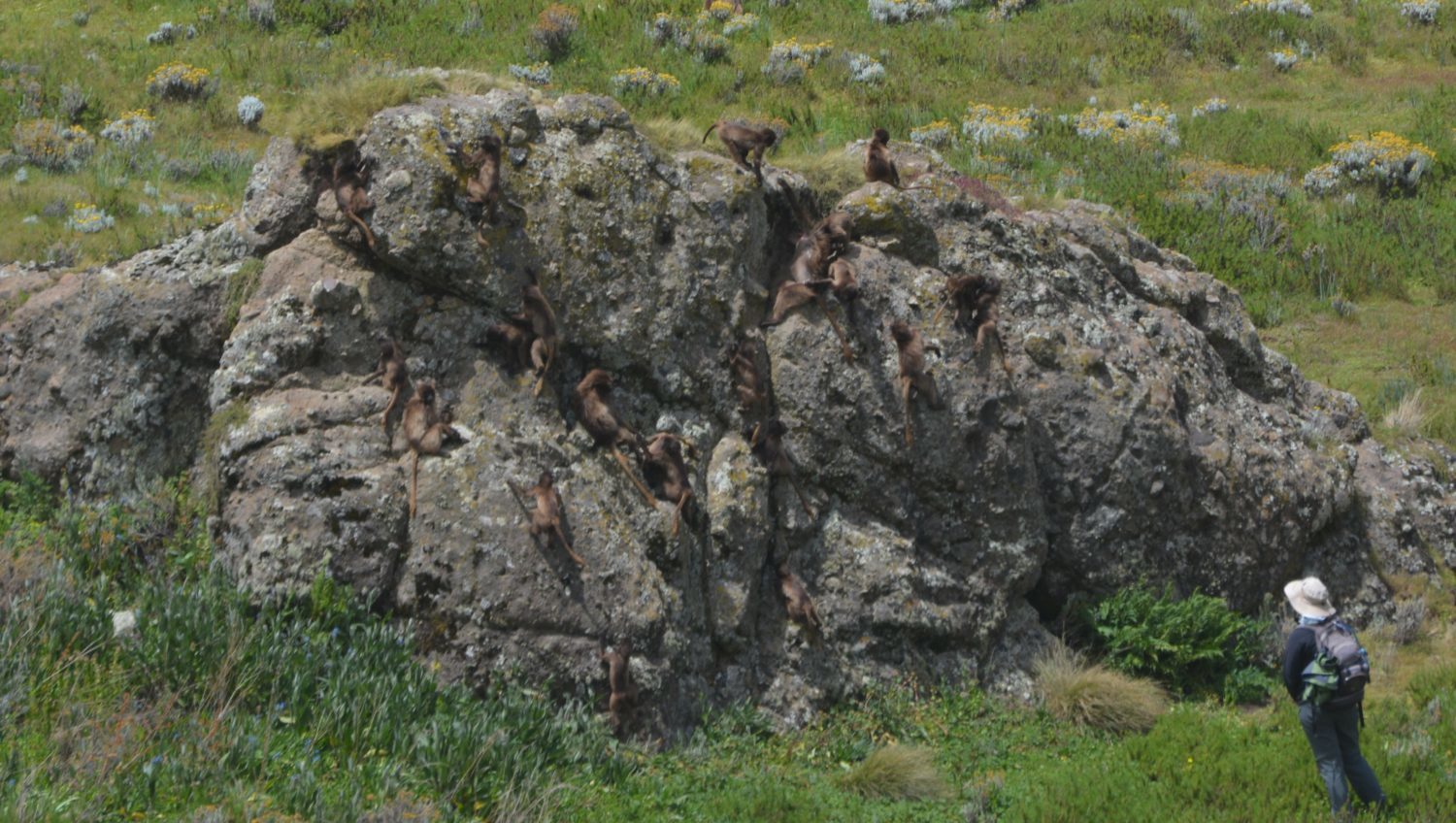 Now halfway through my dissertation field season, I’m at a total of 26 months with the Guassa gelada monkeys split over a handful of years, and these geladas continue to surprise me. Since my first year with the Guassa Gelada Research Project (GGRP) as a field manager in 2012, I have seen many changes:  Geladas have come and gone (some of them my favorites), the ranging has shifted and expanded to new regions of Guassa, and relations between the geladas and local farmers bordering Guassa have grown ever tenser. Despite these changes, Guassa continues to be the home of several hundred gelada monkeys and the researchers who study them. 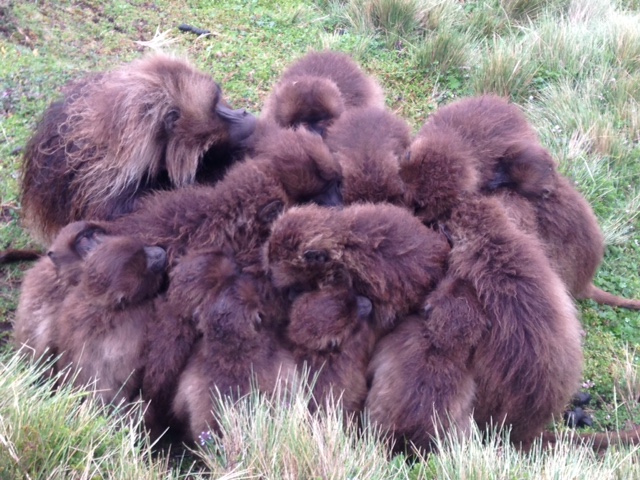 The entire L-unit (six adult females, ten juveniles, four infants, and their fearless leader-male) huddling to stay warm in the fog and rain.

My current research at Guassa investigates how adult males interact with immatures in their units and how the stresses of living in a multi-level social system with high infanticide risk and frequent encounters with rival males seeking to acquire their own harem effect these interactions. Do males provide any parental care, or are they strictly investing in mating effort? Are these investment decisions based on features of their current status and environment? What, if any, are the benefits to offspring of having a father who sticks around? With The Leakey Foundation Research Grant, I am spending this year collecting data which will answer these questions. 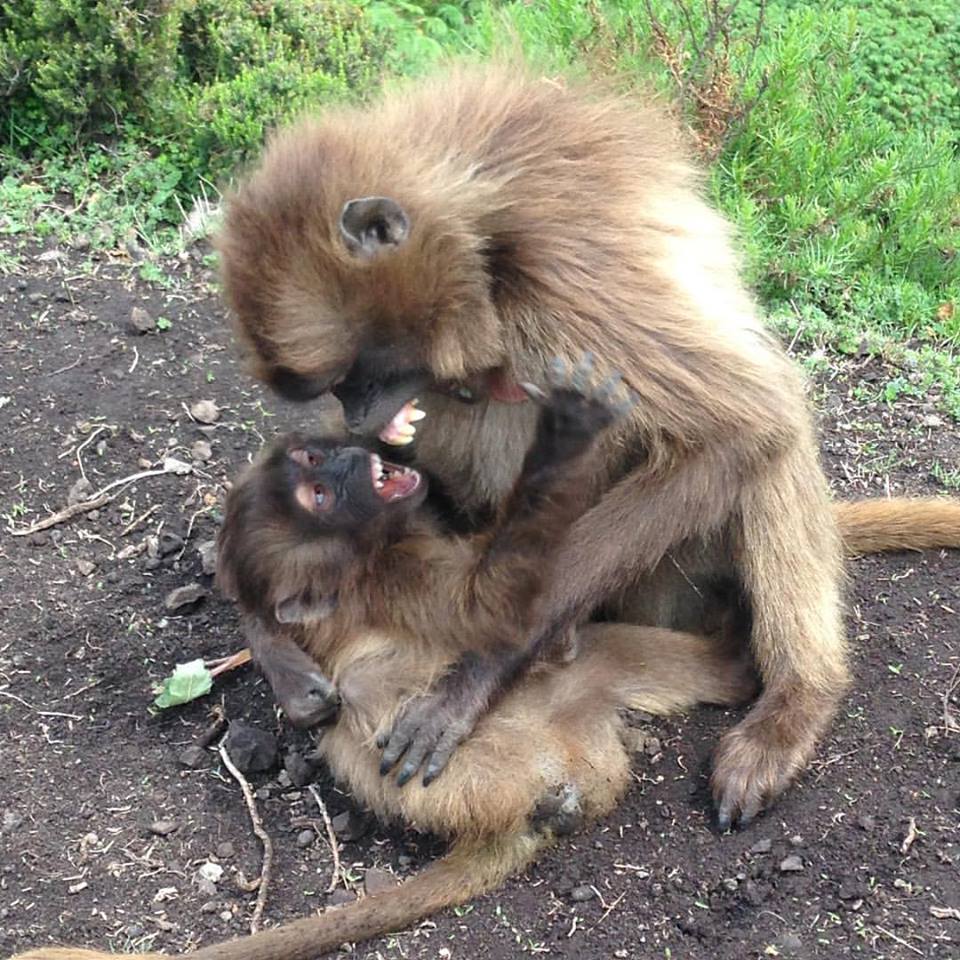 Ayesha and Arya playing together

Geladas, like humans in certain respects, live in multi-level societies, which have core social units nested within one or more larger units of organization. In humans, the core unit consists of a family group. Families live within larger societies with multiple males and females and multiple overlapping sets of identities (e.g. band, tribe, nation). For geladas, the core unit is the one-male unit (OMU), consisting of a dominant leader-male, a number of related adult females and their offspring, and occasionally one or two subordinate follower-males. OMUs exist within larger units known as bands and herds. The multi-level society of geladas raises an interesting set of challenges. The OMU system suggests there should be high paternity certainty for leader-males. Yet, the multi-level structure potentially provides opportunities to acquire paternities outside of the OMU. Furthermore, this system provides opportunities for frequent encounters with rival males in bachelor groups who potentially pose a significant threat to the leader-males and their offspring.

The Guassa gelada study population consists of approximately 220 individuals divided among 13 OMUs. Individuals are identified using natural features, such as scars, cuts, parasitic swellings, and fur color. For adults, keeping track of individuals is a fairly simple task. For juveniles, who have not yet acquired many significant injuries and whose lively, playful activities are more difficult to follow, keeping track of individuals can be a bit more challenging. For example, the L-unit (one of the larger OMUs studied) currently contains six juvenile females that are all about the same age and size. As you can imagine, sometimes it is quite hard to tell them apart. Yet, despite these struggles, the subtle differences in physical features and personalities become obvious as you spend more time with them. Of course, as soon as you get used to the groups, something happens… 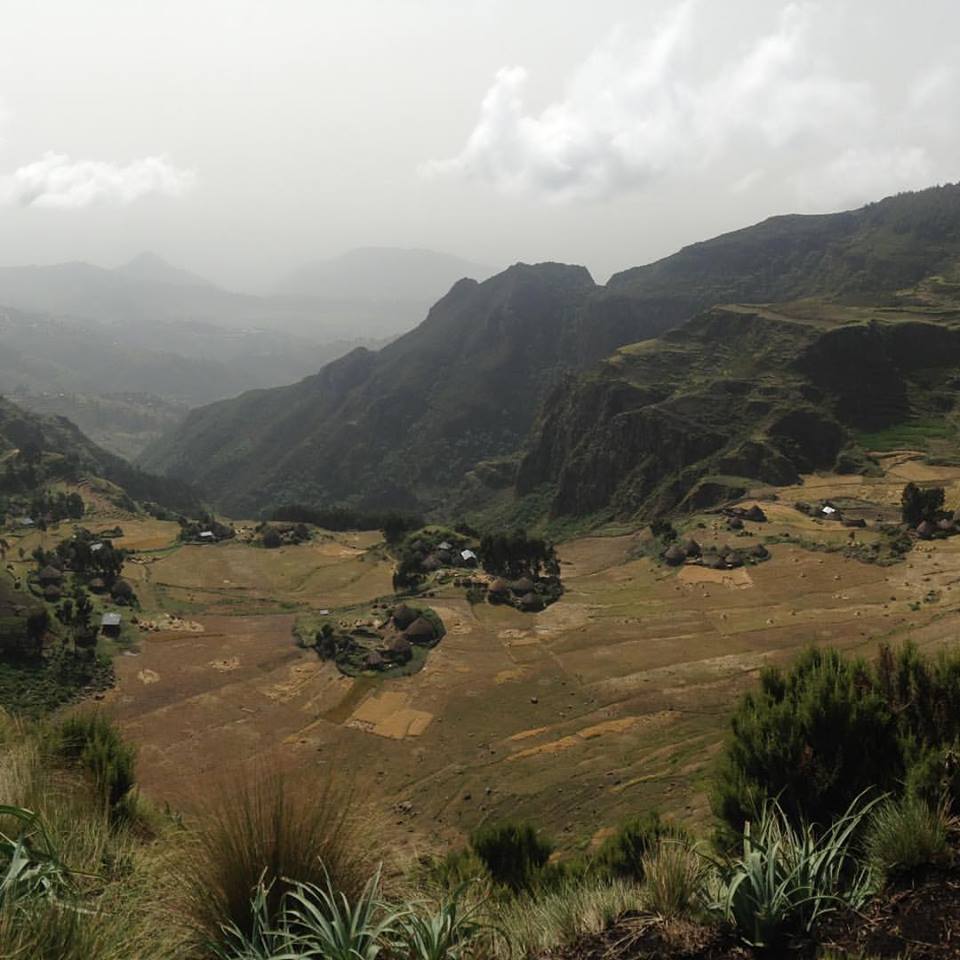 The farms below one of the gelada sleeping cliffs. Farmers plant barley and other crops which the geladas occasionally attempt to raid, making relations between the two a bit tense.

Since beginning my year of fieldwork to collect data for my dissertation, we have had a number of strange and unexpected disappearances and take-overs. During take-over events, a new male becomes the leader, which is very stressful for the OMU. In the relatively short space of six months, six take-over events have occurred in five OMUs (one unit was taken over twice). For five of these six take-over events, the previous leader-male appeared in perfect health, in the prime of life, and had easy to identify features. Usually, we should expect to see at least some of these males present as a follower male or as a member of a bachelor unit, but they are nowhere to be found. In one particularly strange case, the D-unit was unexpectedly leaderless for an entire morning after their leader-male went missing on the previous day. Of course, bachelor males could not ask for a better opportunity to acquire a harem of their own. Several bachelor males quickly took advantage of the abandoned and defenseless unit, fighting amongst themselves until one male won, becoming the new leader-male. As interesting as these take-over events are, the disappearances remain a puzzle. It is possible that these disappearances are the result of unobserved conflict with local farmers or predators (a recently observed leopard may be very successful at hunting).

While we may not be certain of the cause, these strange and mysterious events have provided abundant opportunities to explore how the absence of a father affects the OMU and offspring he left behind. How many more offspring are lost to infanticide? Do immatures receive more aggression from the new male? How long does it take for the OMU to settle back into a sense of calm following the take-over? In the R-unit, Radagast and Reginald, the two youngest infants in the OMU, disappeared shortly after their unit was taken over by a new male. Radagast was last seen struggling to heal from two puncture wounds on his right side, which probably resulted from an attempted infanticidal attack from the new leader-male. Many of the older juveniles in the group frequently submit to their new leader-male while nearly all the adult females resumed cycling and began presenting to the leader. While primate research does not always go as planned, even the unexpected can provide a wealth of data for my own research while providing intriguing questions worth exploring in the future. Never a dull day with the Guassa geladas.

From the Field
Leakey Foundation grantee Shannon Mc Farlin sends an update from the Bwindi Impenetrable National Park in Uganda where she has been cataloging the skeletal remains of mountain gorillas.
« From the Field: Hilary Duke, Kenya
From the Field: Joel Bray, Tanzania »
« BACK TO BLOG