There are few moments more thought-provoking than standing in a dark, damp cave with your arm outstretched, hovering your hand above a red-ochre hand print made over 20,000 years ago, and wondering about the individual who made that impression.  Eighteen passionate paleo-science enthusiasts had such an opportunity during an incredible journey of Northern Spain from May 18-23, along with an extension to Gibraltar May 23-25. (Look for the forthcoming Director’s Diary: Gibraltar in the July eNewsletter.)

The Leakey Foundation’s Fellows Tour began in Santander, Spain, the capital city of the Spanish autonomous community of Cantabria. Cantabria is one of the richest regions in the world for archeological sites from the Upper Paleolithic period. During our time in the region, we visited prehistory sites and museums, famous the world over.

The Museum of Prehistory and Archeology in Santander was a rich experience for our group. Our guide was the Museum’s Director, and Director of the Prehistoric Caves of Cantabria, Roberto Ontanon Peredo. The museum was dense with cutting edge technology; layers of visual lessons were everywhere-hanging from the ceiling (faux stalactites), on the floor (video screens), and jutting out from the walls (a cross section of sediments).

At the National Museum and Research Center of Altamira the Director Jose Antonio Lasheras Corruchaga joined us. After a private guided tour of the (closed) museum, the group went behind the scenes to the library, which overlooked the laboratory. There we had a special viewing of first edition books, including the first drawings (1880’s) made of the art inside the Cave of Altamira.

FUN FACT: Closed since 2004 for conservation efforts, the research center is [experimenting with] allowing visitors to visit the cave of Altamira, on a very limited basis. Every Friday, five lucky “winners” will be allowed to enter the cave for a special guided tour. The winners are selected amongst all the visitors that morning who enter their name in a random drawing…Five names are selected, and they receive the chance of a lifetime to explore the real Altamira!

At the site of El Castillo, we were joined again by Roberto Ontanon Peredo and also El Castillo’s Project Director Federico Bernanldo de Quiros. Our group was divided into teams of ten, with one batch heading in to the cave to see the art, and the other batch learning about ongoing excavations at the site. Inside the empty (closed) cave, it was a visual feast of over 275 figures, representing the most ancient Paleolithic art in the world dating back at least 40,800 years ago. Horses, bison, goats and a mammoth (among other species) represented a variety of animals living alongside man. Over 50 negative handprints could be found, and geometric forms and abstractions were also present.

Our visit to Ramales de la Victoria to see the sites of the Covalanas Cave and El Miron Cave would prove to capture the imaginations of all. Our hosts were Manuel Ramon Gonzales Morales, Project Director of El Miron, and once again Roberto Ontanon Peredo.  Set in the spectacular mountainous landscape of the Cantabrian countryside, the two caves offered a combination of ancient art and new discoveries.

Our visit to the site of El Miron holds special significance for The Leakey Foundation, as we provided research funds in 1995, 1996 and 2003 for Dr. Lawrence Straus and his Spanish colleagues. Nineteen years since our first grant, and over a hundred thousand finds made, the discovery of Magdalenian burials stands out for their significance. We are very excited to see what will come next from the site of El Miron.

Covalanes is a small cave (just up the hillside from El Miron) with two galleries, and the first animal form appears 213 ft. from the entrance. Small dots and lines compose the set of artwork, which is characteristic of some of the caves located in the Basque country and in the Asturias region. This technique inspired thoughts of Seurat’s pointillism, and invoked the famous quote by Pablo Picasso (after his visit to a French cave in the 1940’s), “We have learned nothing in twelve thousand years.“

But the art wasn’t only in the caves. The group enjoyed an evening tour of Frank Gehry’s titanium “ship” known as the Guggenheim Museum Bilbao where we walked through Richard Serra’s installation, laughed at the whimsical “Puppy” by Jeff Koons, and explored the temporary exhibit “Yoko Ono: Half a Wind Show: Retrospective.”  Visits also included a stop at the Museo Picasso in Malaga and Burgos’ Romanesque Cathedral where the artistry and craftsmanship took our breath away. (One of my favorite discussions on the tour, was what constitutes art? A painting of a bison in a cave, or a totally white chess board, or maybe an abstract acrobat? To each our own!)

For many travelers on the Foundation’s Tour of Spain, it was Sierra de Atapuerca that could not be missed! Horizontal rain and blowing wind could not deter our group from savoring the incredible opportunity we had, thanks to Professors Jose Maria Bermudez de Castro and Maria Martinon-Torres.  Atapuerca is an exceptional example of the earliest human story, and we were able to view three major excavations at the site including the Gran Dolina (viewed from high-above on scaffolding). One of our guides, Dr. Martinin-Torres is a 2012 Leakey Grantee for a research project titled, “Micro-CT study of the Pleistocene human fossil teeth from Atapuerca.” Following Dr. Martinin-Torres informal talk on her project, one fellow traveler told me, “Never have teeth been so exciting!” Our time at Atapuerca evoked excitement for all.

It is the site of Sima de los Huesos (at Atapuerca) that many people know by its translation, Pit of Bones. And for good reason…at the bottom of a 43ft. cave shaft, no fewer than 28 humans have been discovered, and this sample represents 75% of hominid fossils known between 100,000 and 1.5 million years ago. We had a chance to view many of the original fossils from Sima de los Huesos on our tour of the Museum of Human Evolution with its Director (and Co-Director of Atapuerca) Juan Luis Arsuaga. It was thrilling to see exquisite fossils, including the pelvis “Elvis” and skull number 5, and to ask Professor Bermudez de Castro about ongoing excavations.

The technology being used at archeological sites and museums continued to surprise me throughout our travels. At a very special site called Santimamiñe in Basque Country, the site offers a comprehensive installation developed to create a virtual tour of the cave, housed in a small hermitage. A guide “led” us through the cave on a stereoscopic screen with audio, and we “explored” the 1,100ft. long original cave. Fully digitized detail with total precision, the minimal margin of error is only 2-inches throughout the entire project.

Earlier this day we visited the newly opened Archeological Museum of Bilbao and toured the processing and storage facilities to see how every artifact that is excavated in tgalleryhe Basque Country is managed in a state of the art computer database.

So the group enjoyed visits to archeological sites and museums, but as to be expected in Spain, meals were also an adventure. Over the course of seven days, travelers had the chance to converse on the many wonders experienced, while dining at incredible restaurants. The group enjoyed four Michelin-starred dining experiences: El Serbal in Santander, lunch at Solana in the Cantabrian countryside, Nerua near the Guggenheim Museum in Bilbao, and Jose Carlos Garcia in Malaga.  There were also lively spots for more casual tapa’s; the “Willy Wonka” boxes at the end of a few meals; raising a glass of cava wine to toast Dr. F. Clark Howell’s pioneering work in Spain; and a feast onboard a boat floating in the waters surrounding Gibraltar.

At our final dinner together, I asked the group to reflect on a special moment they experienced on the tour…something they learned or something that was awe-inspiring.

That dinner conversation was as memorable as the special moments we shared…it was honoring the memory of a father with a visit to Atapuerca; it was standing beneath a favorite piece of art (the spider) at the Guggenheim in Bilbao; it was asking for a bit more melted chocolate on a dessert; it was wondering about the life of a buried Magdalenian woman; it was braving the elements, the narrow paths, the scaffolding and the 300 stairs to visit important archeological sites; it was celebrating a wedding anniversary with new and old friends; and for some it was just having the opportunity to take the journey.

For me, the highlight was floating my hand above that very special red-ochre handprint. 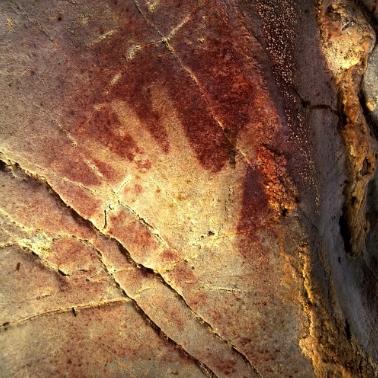 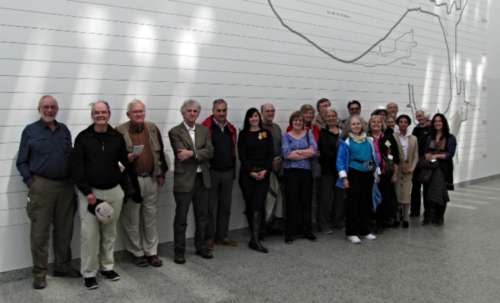 The Group at the Museum of Human Evolution 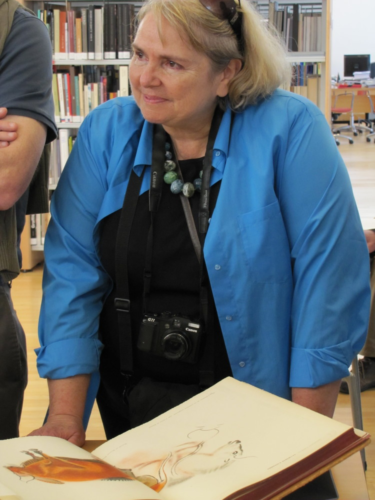 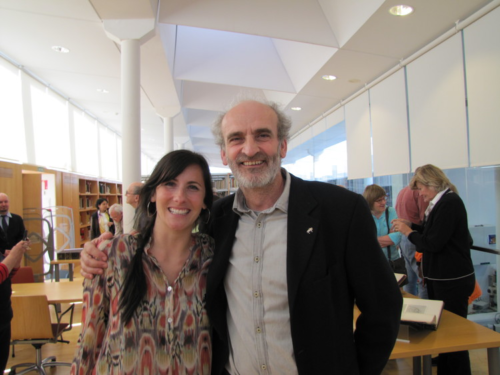 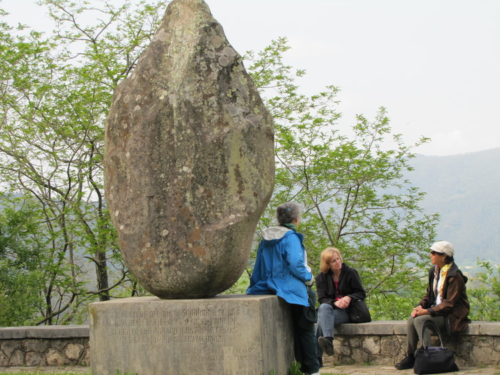 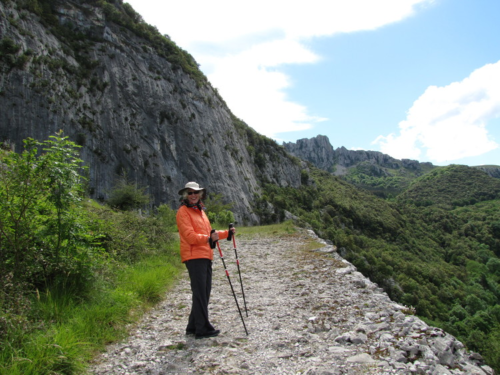 Martha Lewis on the climb to Covalanas. 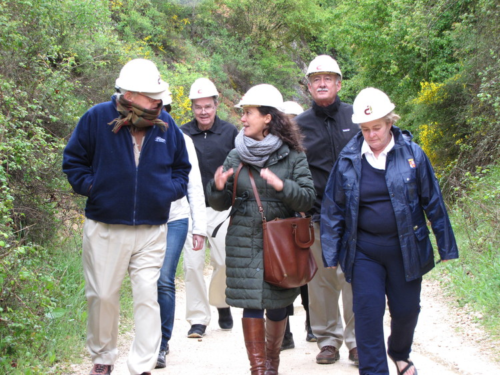 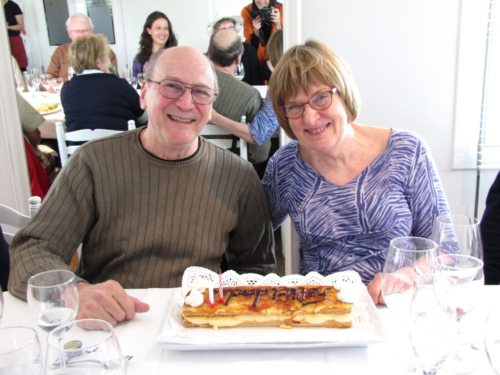 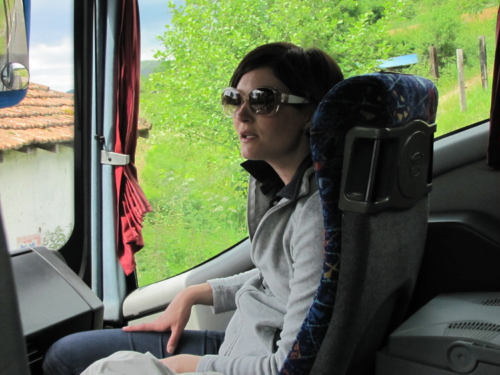 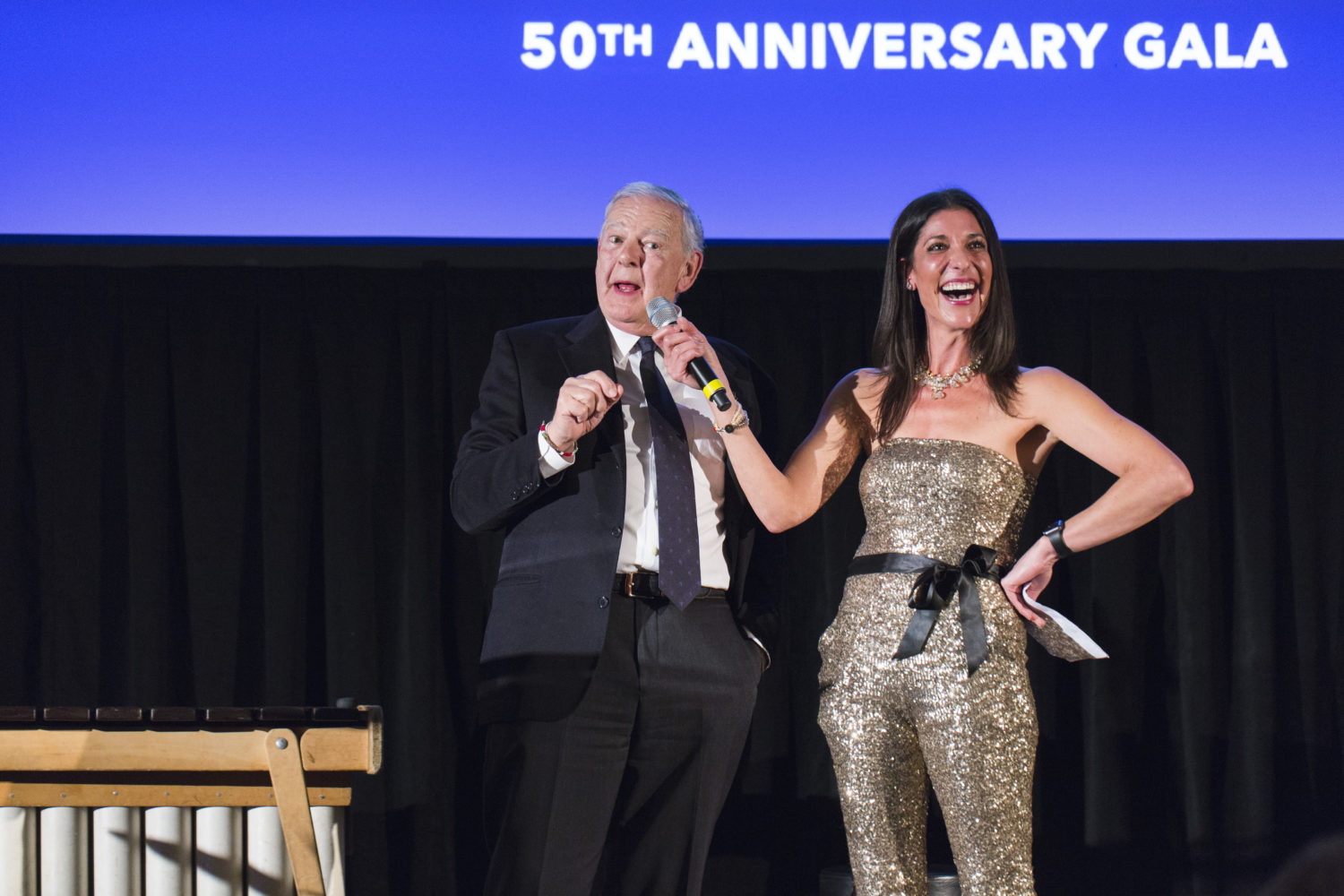 The Leakey Foundation, Director's Diary
Leakey Foundation supporters and grantees gathered in San Francisco on May 3 to celebrate 50 years of exploration, discovery and sharing our human story. 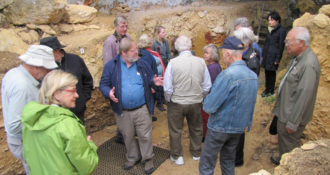 The Leakey Foundation, Director's Diary, Travel
When I stood in the dimly lit overhang at Abri de Cap Blanc in the Dordogne region of France and my eyes beheld the carved horse in sandstone (15,000ya) I was reminded that the capabilities to imagine and create lie deep in our species’ DNA.
The Director’s Diary: Spain (part two) »
« BACK TO BLOG