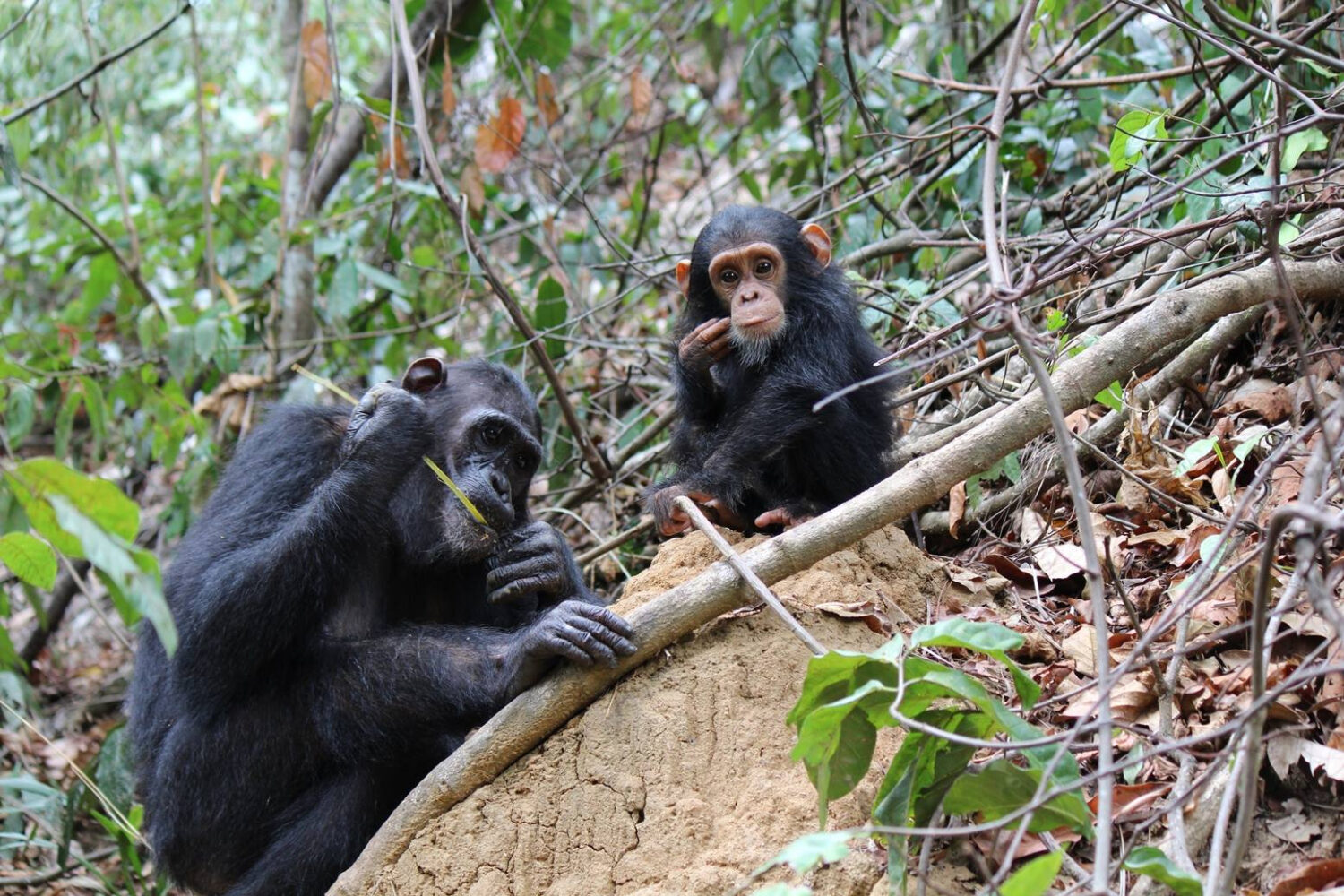 An adult female chimpanzee with her offspring fishes for termites at Gombe, Tanzania. Photo courtesy of Kara Walker.

Teach a chimpanzee to fish for insects to eat, and you feed her for a lifetime. Teach her a better way to use tools in gathering prey, and you may change the course of evolution.

For most wild chimpanzees, tool use is an important part of life – but learning these skills is no simple feat. Wild chimpanzees transfer tools to each other, and this behavior has previously been shown to serve as a form of teaching.

A new study supported by The Leakey Foundation and led by researchers at Washington University in St. Louis, the University of Miami and Franklin & Marshall College finds that chimpanzees that use a multi-step process and complex tools to gather termites are more likely to share tools with novices. The research was conducted in partnership with the Wildlife Conservation Society, Lincoln Park Zoo and the Jane Goodall Institute. The study helps illuminate chimpanzees’ capacity for prosocial — or helping — behavior, a quality that has been recognized for its potential role in the evolution of human cultural abilities.

“Non-human primates are often thought to learn tool skills by watching others and practicing on their own, with little direct help from mothers or other expert tool users,” said Stephanie Musgrave, assistant professor of anthropology at the University of Miami, and first author of the study published the week of Dec. 23 in the Proceedings of the National Academy of Sciences.

“In contrast, the results from this research indicate that social learning may vary in relation to how challenging the task is: during tasks that are more difficult, mothers can, in fact, play a more active role, including behaviors that function to teach.”

Beginning with Jane Goodall in the 1960s, researchers have been studying chimpanzee tool use for decades at the Gombe Stream Research Center in Tanzania. The Gombe chimpanzee study is one of the longest running studies of animal behavior in the wild. This year marks the 20-year anniversary of the study of chimpanzees in the Goualougo Triangle, Republic of Congo, where researchers have documented some of the most complex tool behaviors of chimpanzees.

The study is distinctive because it applies standardized methods to directly compare how processes of cultural transmission may differ between two populations of wild chimpanzees.

In both populations, the chimpanzees use tools to target the same resource — but the task varies in complexity.

The findings of the current study are important on a number of levels, Musgrave said. “First, chimpanzee populations may vary not only in the complexity of their tool behaviors but in the social mechanisms that support these behaviors,” she said. “Second, the capacity for helping in chimpanzees may be both more robust and more flexible than previously appreciated.”

Among animals, chimpanzees are exceptional tool users. Different groups of chimpanzees use different types of tools – and likewise, researchers have suggested that the teaching process might be customized to facilitate these local skills.

In this study, researchers examined the transfer of tools between chimpanzees during termite gathering, and compared the population in the Goualougo Triangle, Republic of Congo, with the population in Gombe, Tanzania. 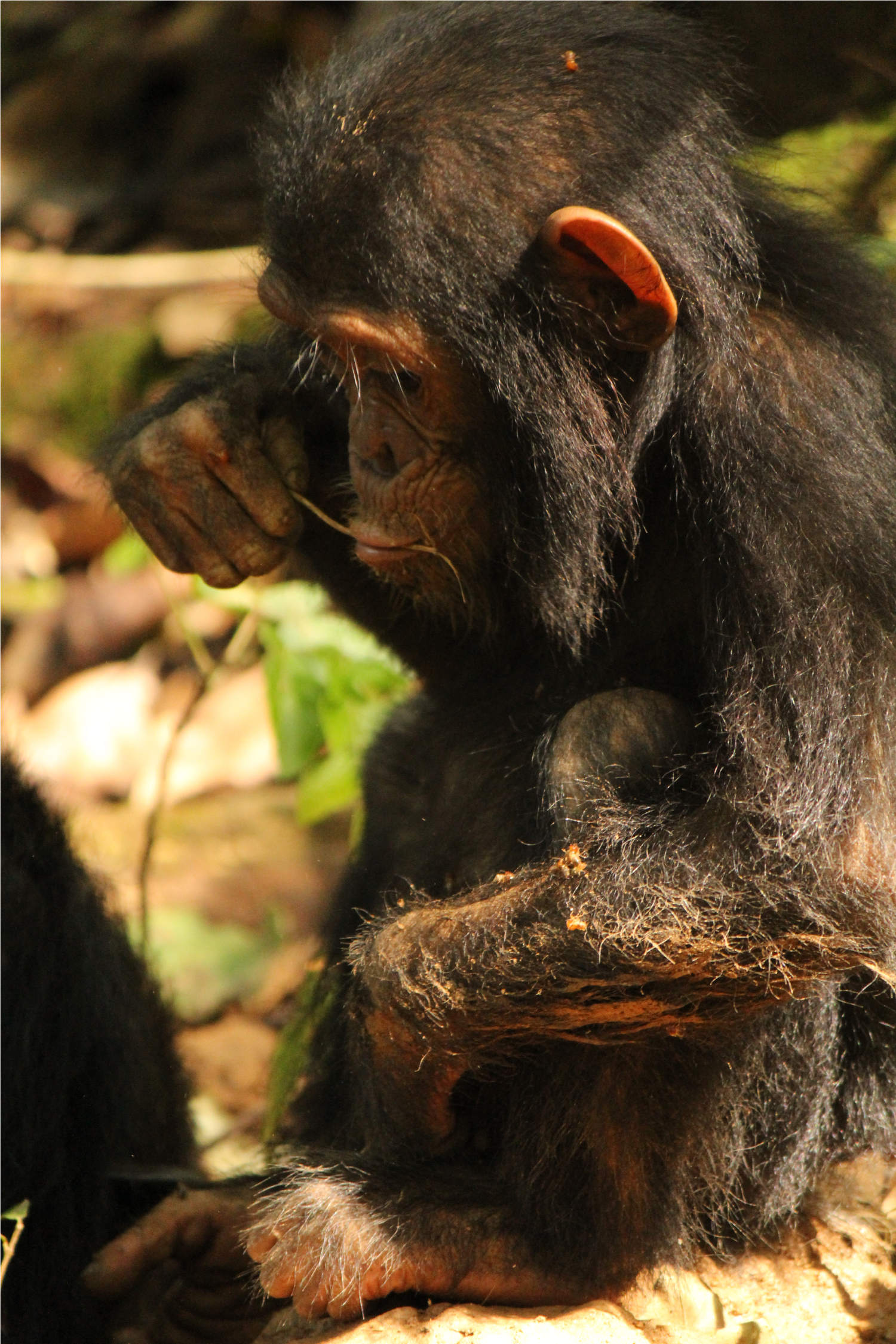 Termites and other insects are a valuable source of fat and protein in the diet of wild chimpanzees and also contribute important vitamins and minerals. Termites build complex nest structures that encompass a network of below-ground chambers, sometimes topped with a towering, freestanding mound reaching several meters high.

Chimpanzees in both locations use fishing-probe style tools to harvest termites, but Goualougo chimpanzees use multiple, different types of tools sequentially. They also make tools from specific plant species and customize fishing probes to improve their efficiency.

The researchers found differences in the rate, probability, and types of tool transfer during termite gathering between these two populations.

At Goualougo, where the fishing tasks were more complex, the rate of tool transfer was three times higher than at Gombe, and Goualougo mothers were more likely to transfer a tool in response to a request. Further, mothers at Goualougo most often responded to tool requests by actively giving a tool to offspring. Such active transfers were never observed at Gombe, where mothers most often responded by refusing to transfer tools. Given that offspring in both populations made comparable requests for tools, these differences suggest that mothers at Goualougo were, in fact, more willing to provide tools.

“We have previously documented that tool transfers at Goualougo function as a form of teaching,” said Crickette Sanz, associate professor of biological anthropology in Arts & Sciences at Washington University. “The population differences we observed in the present study suggest that teaching may be related specifically to the demands of learning to manufacture tools at Goualougo, where chimpanzees use multiple tool types, make tools from select plant species, and perform modifications that increase tool efficiency.”

“An increased role for this type of social learning may thus be an important component of the transmission of complex tool traditions over generations,” she said.

“While Gombe and Goualougo chimpanzees both fish for termites, we suspected that there might be differences in how this skill is acquired,” said Elizabeth Lonsdorf, associate professor of psychology at Franklin & Marshall College. “But only after many years of accumulating these data were we able to rigorously quantify these differences.”

“To date, prosocial helping in chimpanzees has been principally examined in captivity or using differing methods in the wild,” said Stephen Ross, director of the Lester E. Fisher Center for the Study and Conservation of Apes at Lincoln Park Zoo. “This study provides novel evidence for helping behavior in wild chimpanzees and demonstrates that chimpanzees can help flexibly depending on context.” 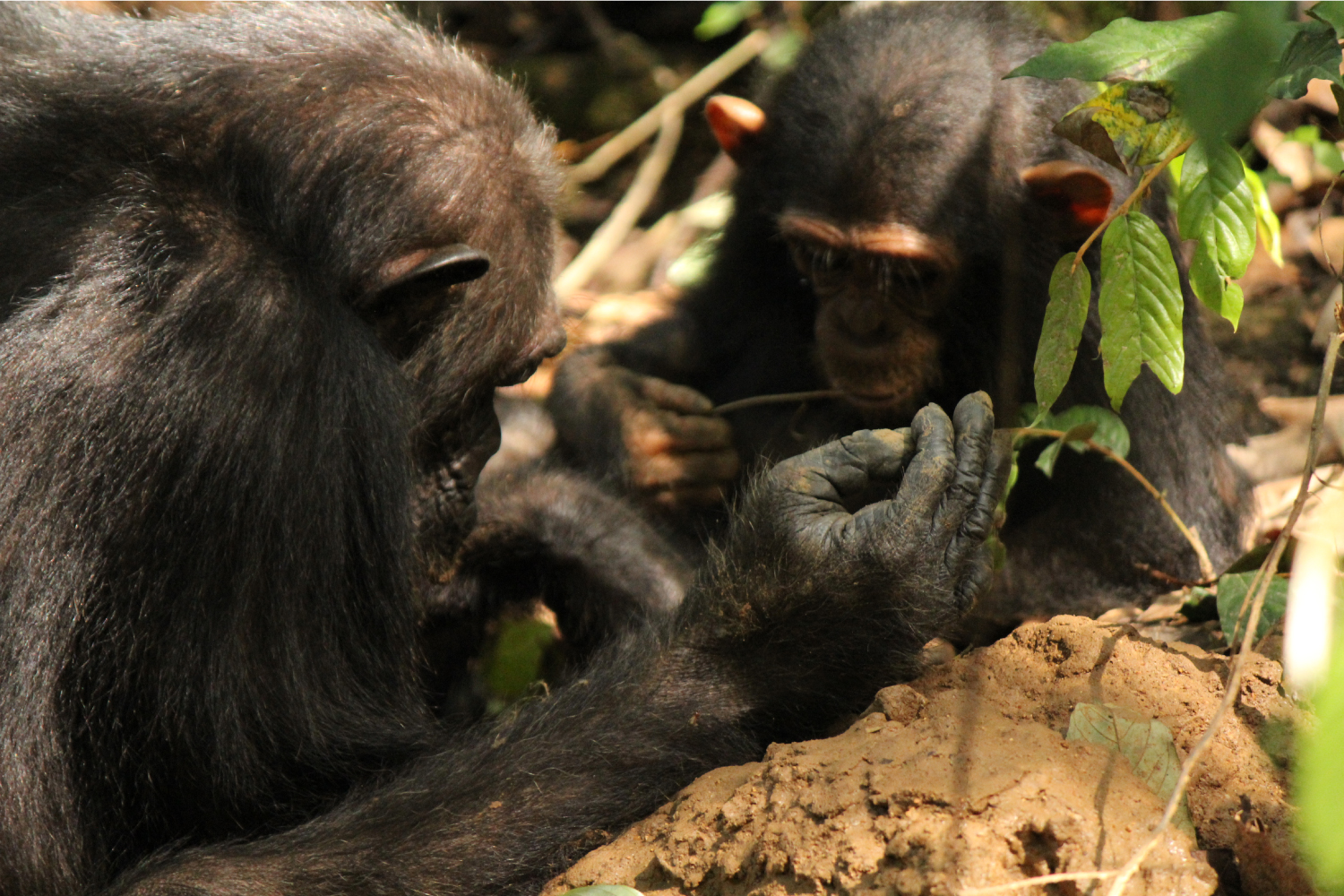 An adult female chimpanzee and her infant fish for termites at Gombe, Tanzania. Photo courtesy of Chris Walker.

Understanding how chimpanzee tool traditions are passed on over generations can provide insights into the evolutionary origins of complex cultural abilities in humans.

“Human evolution is characterized by the emergence and elaboration of complex technologies, which is often attributed to our species’ aptitude for passing skills onto one another through mechanisms such as teaching and imitation. However, the evolutionary origins of these capacities remain unclear,” Musgrave said.

“Our research shows that the human propensity to assist others in acquiring complex skills may build at least in part upon capacities that we share with our closest living relatives.”

Conservation efforts are fundamental to this research and future studies.

“Chimpanzees and their cultures are endangered,” said Emma Stokes, director of the Central Africa Program at the Wildlife Conservation Society. “Recent research shows that human activity imperils the survival of chimpanzee cultures. Studying our closest living relatives offers a unique opportunity to gain insights into the evolutionary origins of cultural behavior – but this privilege depends on long-term efforts to conserve these apes and their habitats.”