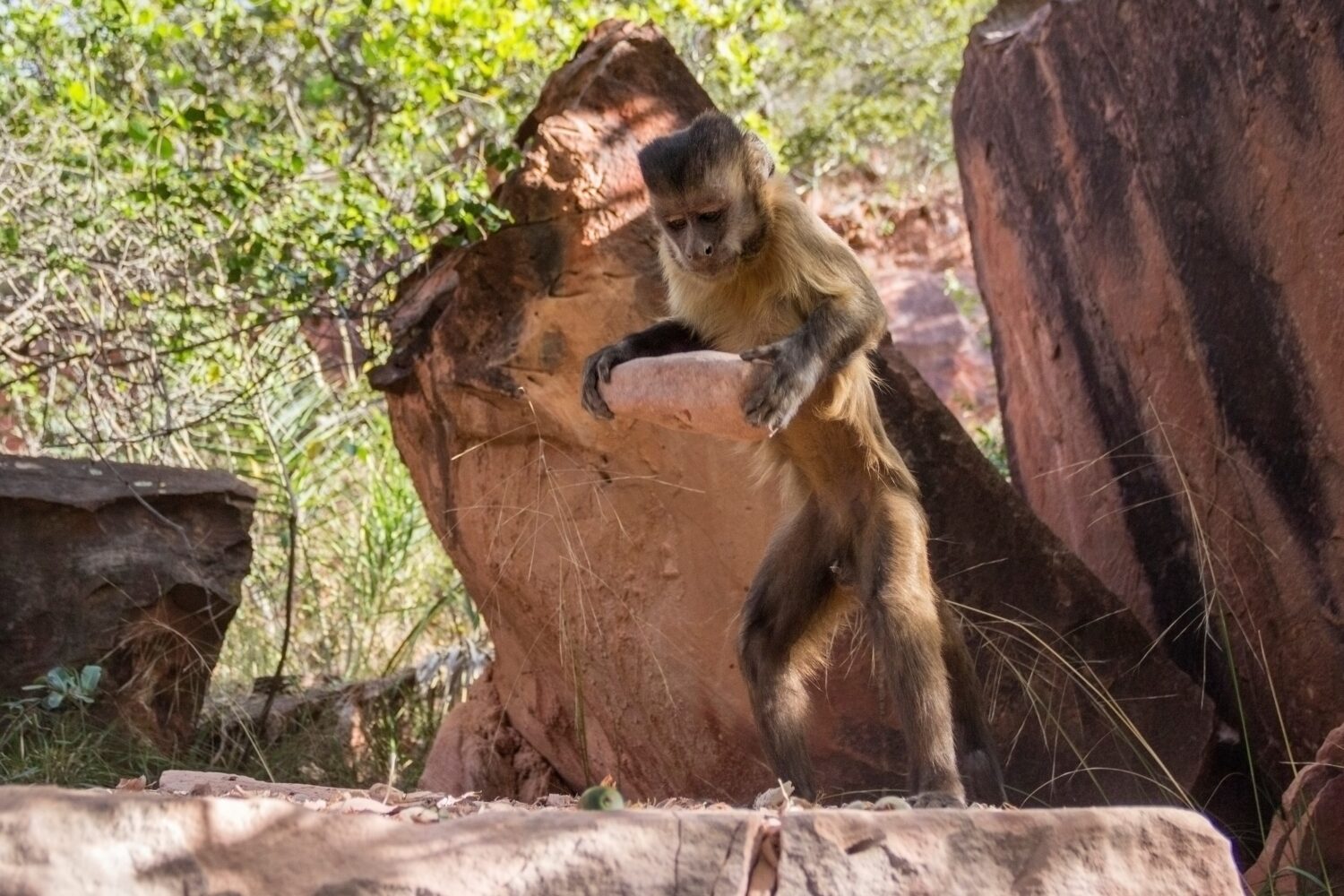 Human beings used to be defined as “the tool-maker” species. But the uniqueness of this description was challenged in the 1960s when Dr. Jane Goodall discovered that chimpanzees will pick and modify grass stems to use to collect termites. Her observations called into question homo sapiens‘ very place in the world.

Since then scientists’ knowledge of animal tool use has expanded exponentially. We now know that monkeys, crows, parrots, pigs, and many other animals can use tools, and research on animal tool use changed our understanding of how animals think and learn.

Studying animal tooling – defined as the process of using an object to achieve a mechanical outcome on a target – can also provide clues to the mysteries of human evolution.

Our human ancestors’ shift to making and using tools is linked to evolutionary changes in hand anatomy, a transition to walking on two rather than four feet and increased brain size. But using found stones as pounding tools doesn’t require any of these advanced evolutionary traits; it likely came about before humans began to manufacture tools. By studying this percussive tool use in monkeys, researchers like my colleagues and I can infer how early human ancestors practiced the same skills before modern hands, posture and brains evolved.

Understanding wild animals’ memory, thinking, and problem-solving abilities is no easy task. In experimental research where animals are asked to perform a behavior or solve a problem, there should be no distractions – like a predator popping up. But wild animals come and go as they please, over large spaces, and researchers cannot control what is happening around them.

However, some field sites provide a unique opportunity to test wild animals’ cognition. Fazenda Boa Vista in Piauí, Brazil is one of those sites. Here, wild bearded capuchin monkeys (Sapajus libidinosus) naturally use stones and anvils to crack open nuts.

Along with fruit, insects, fungi, and tubers, the Fazenda Boa Vista capuchin monkeys opportunistically crack open nuts as an additional food source. Although these monkeys only spend about 2% of their time using tools to access foods, the nuts they eat are an important secondary food item that is available year-round. The challenge is that these nuts have tough shells that can’t be cracked open without a tool. This population of monkeys has figured out how to crack nuts by placing them on a wood or stone anvil and then smashing them with rocks that weigh around 25-50% of their body weight.

These bearded capuchin monkeys were the first South American primates that scientists ever observed using tools – only spotted in 2003. Since this discovery, researchers have been studying the decision-making and strategies involved in capuchins’ stone tool use.

Because using stones to pound open food looks remarkably like what anthropologists imagine one of the earliest forms of human tool use looked like, researchers study these monkeys as a way to understand our own evolutionary past.

What happens with a new tool?

My colleagues and I carried out an experimental field study that focused on understanding how these monkeys prepare to use their tools. Just as a person might move her hands around a box to decide how best to lift it, monkeys at this site feel their way through tool use.

First, we placed unfamiliar stones and palm nuts around naturally-occurring wood or stone anvils. Since the monkeys frequently use stones to crack open these tough nuts on the anvils, it was only a matter of time before they tried out the experimental stones.

We filmed slow-motion videos of 12 monkeys cracking nuts to understand how monkeys adjust to using an unfamiliar tool. The idea, stemming from perception-action theory, is that monkeys may obtain helpful information about the tool, like how heavy it is, and where they can hold it securely, by manipulating it before they use it. Like testing a hammer with a few light taps before you use it, this information may then help the monkeys to strike the nut forcefully and accurately.

Back in the U.S., we spent months carefully watching the slow-motion videos and recording the monkeys’ quick behaviors while using tools. The videos showed that for nut-cracking, monkeys grasp the sides of a stone, lift it to shoulder height, quickly move its hands to the top of the stone, then bring it down on the nut.

Given that the stones can weigh about half as much as an adult female monkey, this is an impressive feat. But it’s not always done perfectly. If the monkey’s grip isn’t right, she might lose control of the stone, and if the stone comes down at an angle the nut is likely to fly off the anvil. When this happens, the monkeys lose precious time and energy trying to achieve their goal.

What we found, though, is that the monkeys might avoid these imperfect outcomes by spinning, flipping and doing partial lifts with the stones to test different grips and find the one that’s most likely to be successful. The preparatory lifts didn’t necessarily help the monkeys crack open more nuts, but they might be linked to “tuning” muscular coordination as the monkeys prepare themselves for a heavy lift. Essentially, the preparatory lifts may help the monkeys get a sense of what they’ll need their muscles to do when it comes time to lift the stone and strike the nut in earnest.

This same sort of haptic perception – the process of coming to understand an object by moving it around – plays a key role your own ability to use tools with dexterity. In human beings’ evolutionary past, increasingly refined haptic perception may have contributed to advancing tool use.

Studying how animals think about and use tool offers scientists like me an exciting glimpse into what human evolutionary history may have looked like, while also helping us to better understand animals in their own right.

Journal Article
Teach a chimpanzee to fish for insects to eat, and you feed her for a lifetime. Teach her a better way to use tools in gathering prey, and you may change the course of evolution.
« Chimpanzees more likely to share tools, teach skills when task is complex
Archaeological Discoveries Are Happening Faster Than Ever Before »
« BACK TO BLOG