The Diversity of Rural African Populations Extends to Microbiomes

New microbiome research funded in part by The Leakey Foundation points to a role for lifestyle, geography, and genetics, with surprising similarities to US populations in some cases. 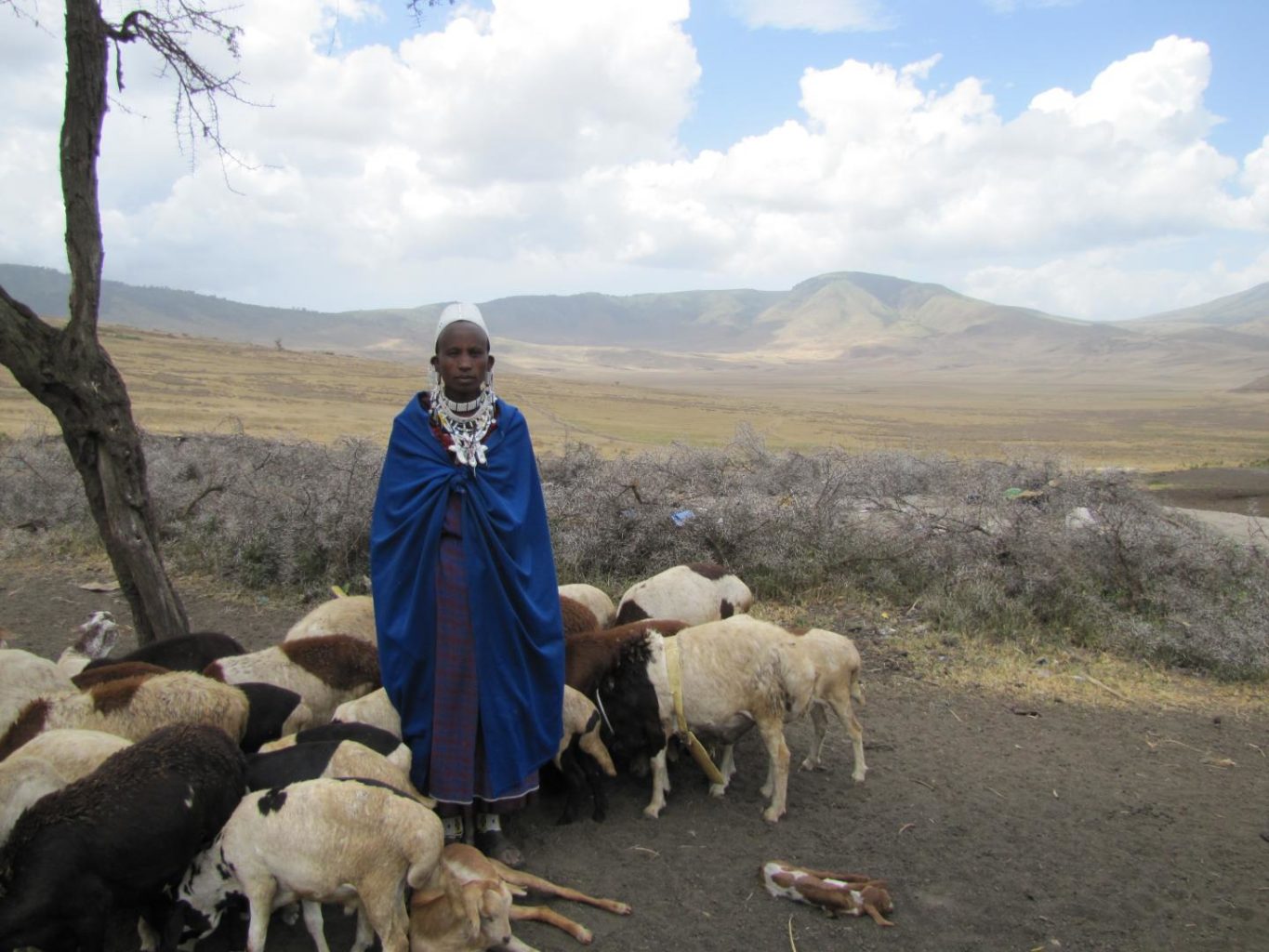 A Maasai woman in a traditional outfit posing with her livestock. Photo by Alessia Ranciaro/Tishkoff Lab

Our microbiome, the complex community of bacteria, fungi, parasites, and other microorganisms in and on our bodies, reflects the way we live. If we own a pet, we likely share microbes with them. If we eat meat, the microbiome in our intestines may look different from that of a vegan.

In a growing field of study to determine how we acquire the microbes we carry within us and their influence on our health, most analyses have focused on people living in developed nations. But in the last several years, scientists have begun to investigate whether people in non-industrialized societies possess distinctly different microbiomes and, if so, what factors shape those differences.

A new report, published in the journal Genome Biology, has made significant strides in addressing these questions. Led by a team of geneticists from the University of Pennsylvania, in collaboration with researchers from Tanzania, Botswana, and the National Institutes of Health, the study is one of the largest to date to analyze the gut microbiomes of ethnically diverse Africans, with samples from 114 Botswanan and Tanzanian people from seven populations, as well as a comparison group from the United States.

The results point to the wide range of microbiome profiles across populations, which practice a variety of different lifestyles, from agropastoralist to pastoralist to hunter-gatherer. The magnitude of the differences is on par with the differences seen between industrialized and non-industrialized populations. Yet the researchers were also intrigued by unexpected similarities between groups.

“When we started this,” says geneticist Sarah Tishkoff, a Penn Integrates Knowledge Professor at Penn and senior author, “my hypothesis was that diet was going to be the driving factor in distinguishing the microbiome of these diverse populations. My biggest surprise was that that wasn’t the case.”

In fact, a subset of the samples from Bantu-speaking people living in farming communities in Botswana were nearly indistinguishable from those collected from people living in the Philadelphia area, samples collected by study coauthor Frederick Bushman, a microbiologist at Penn’s Perelman School of Medicine.

“The bacterial composition from some of the agropastoralists in Botswana was strikingly similar to the U.S. cohort,” says Matthew Hansen, a scientist in Tishkoff’s lab and co-lead author on the paper. “These are rural groups; they have a very different lifestyle but some factor is giving them a very similar microbiota to healthy Philadelphia-area residents.”

Previous efforts to examine the gut microbiomes of rural Africans have typically compared a single African population to one or more populations from industrialized nations. These earlier studies pointed to differences between groups; for example, a comparison of gut microbiomes between Italians and Hadza hunter-gatherers in Tanzania identified several groups of bacteria present in the Hadza that had not been previously identified in populations from Westerners. 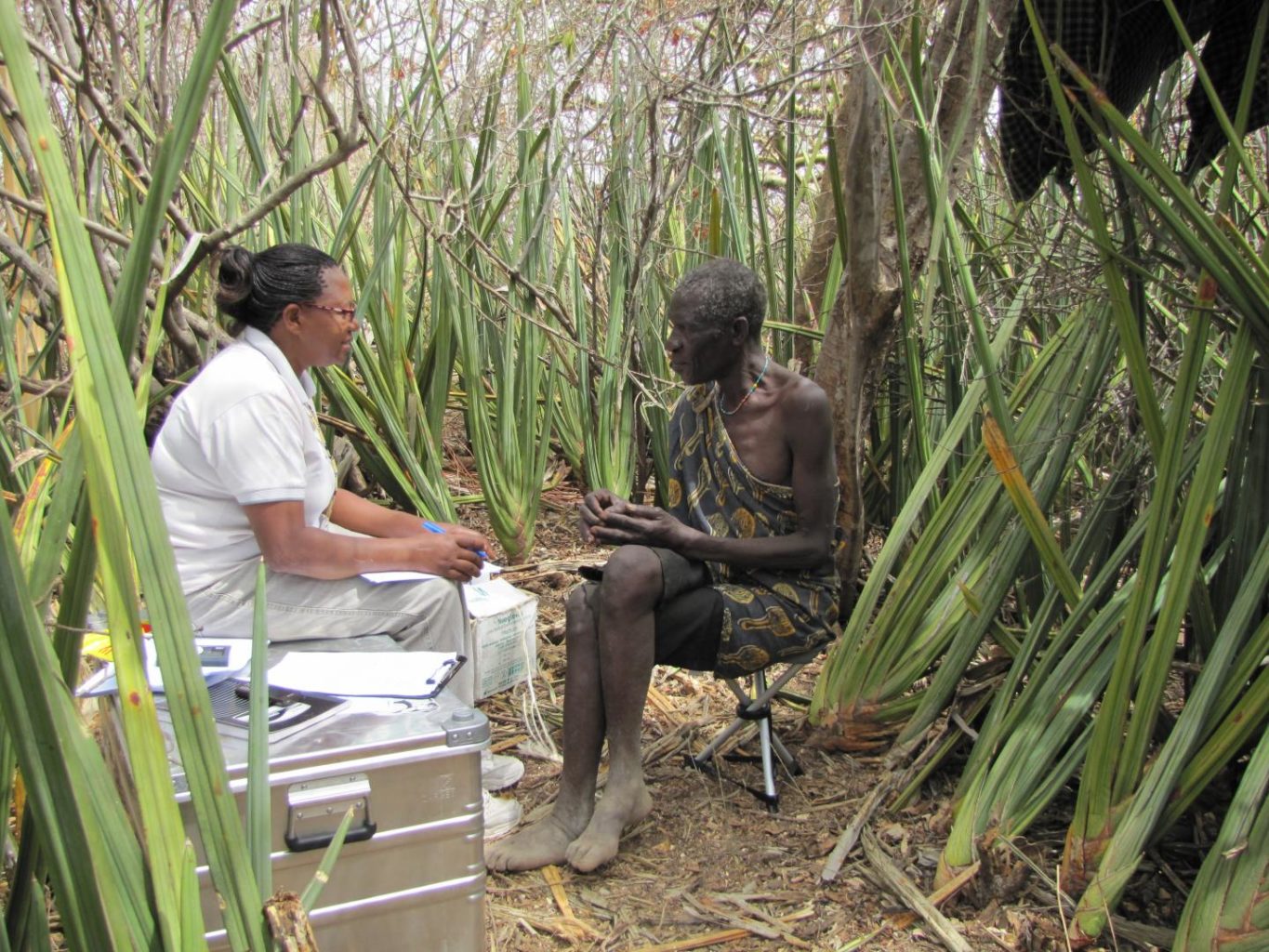 A nurse from the Kilimanjaro Christian Medical Center, works in the field with a study participant in Tanzania.
Photo credit: Alessia Ranciaro/Tishkoff Lab

Gathering the data, which required requesting residents of remote villages to provide fecal samples to the scientists, was by no means a simple process. Alessia Ranciaro, who helped lead data collection efforts for the work, says she and colleagues learned from early experiences how to navigate cultural and logistical hurdles to make the process smoother for both the participants and the scientists.

The researchers extracted DNA from the samples and sequenced a portion of the 16S ribosomal RNA gene, widely used in microbiome studies to help identify and compare bacteria.

“The analysis allows you to classify bacteria in a sample down to the genus level in many cases,” says Meagan Rubel, a doctoral student in Tishkoff’s lab who co-led the work. “But in the sample databases that we’re using, the bacteria has been classified based on industrialized or western groups, so people living these traditional lifestyles may have bacteria that we have never seen before.”

From the results they were able to obtain, broad patterns quickly emerged. Notably, the Botswanan samples differed from the Tanzanian ones. The gut microbiomes from Tanzanian populations tended to have a higher number of microbes in each sample, and individuals tended to share similar microbial profiles. In Botswana, on the other hand, samples tended to have fewer microbial species overall, and individuals’ microbiomes tended to be more different from one another. The latter pattern was also present in the U.S. samples.

While the analysis didn’t point to a “smoking gun” explaining this result, the researchers hypothesize that the reasons are tied to Botswana’s comparative national wealth and access to medical care.

“Botswana has diamonds and is relatively wealthy,” says Tishkoff. “They have a free medical system and a free educational system, which is very different from Tanzania.”

“You can imagine that within the spectrum of very different groups in African countries,” says Rubel, “there are groups undergoing these soft measures of industrialization that could be everything from increased access to clinical care to different kinds of foods. Antibiotic usage is something that can really change the gut microbiome, so people who have more access to that might be seeing marked shifts in their microbiome.”

Such shifts could help explain the similarities between Botswana and U.S. samples, though the researchers say more work needs to be done to confirm that is the case.

Overall, broad differences in the gut microbiome were readily apparent between the U.S. and most Africans. Within Africa, the frequency of some bacterial groups could differentiate populations by ethnicity and lifestyle. For instance, the two hunter-gatherer populations, the San and the Hadza, possessed different patterns of gut bacteria compared to pastoralist or agropastoralist groups. In addition, in the Maasai and Hadza populations, two groups in which the division of labor between men and women is particularly extreme, the researchers found significant sex differences in the microbiomes they analyzed.

To understand more about what the bacteria in the gut were actually doing, the researchers looked for molecular pathways that were abundant across the various microbial species in a given sample. In the U.S. samples, they identified pathways involved in breaking down environmental pollutants, such as bisphenol, which includes bisphenol A, better known as “the dreaded BPA in plastics,” says Rubel, as well as DDT, the insecticide responsible for thinning birds’ eggshells that has been banned in the U.S. since the 1970s.

They found evidence of DDT-breakdown pathways as well in the samples from Botswana, a country that has continued to use the chemical to control mosquitoes responsible for transmitted diseases such as malaria.

The findings raise a number of interesting questions, on which the researchers hope to shed more light with additional analyses and genetic and genomic sequencing in the future. They’re also probing the samples further to see whether the presence of gastrointestinal pathogens may play a primary role in influencing the gut microbiota of people in areas where such infections are prevalent.

“Our work expands a growing narrative,” says Rubel, “where microbiome trends seem to track with the level of industrialization across populations.”

The scientists note that even these remote African populations are not static in their lifestyle practices; development and its influences on the environment and traditional lifestyles may manifest in shifting microbiome patterns.

“What would be great to do is a longitudinal study of some of these groups,” says Hansen. “Over the next 20 years, their lives are certain to change rapidly, and it would be interesting to see if we find a shift in the microbiome as these lifestyle factors change.”

Matthew Hansen is a research associate in the Tishkoff lab.

Meagan Rubel is a Ph.D. student co-advised by Tishkoff and Theodore Schurr, a professor in the Department of Anthropology in Penn Arts and Sciences.

Alessia Ranciaro is a senior research scientist in the Tishkoff lab.

Frederic Bushman is the William Maul Measey Professor in Microbiology in the Perelman School of Medicine at Penn.

This article was provided by the University of Pennsylvania