The Leakey Foundation has released the first episode of the new season of its award-winning Origin Stories podcast.

“The Four Year War” explores the community split and deadly violence that happened among the Gombe chimpanzees in the 1970s. The cause has remained a mystery until now.

“The Four Year War” incorporates archival audio of Jane Goodall from The Leakey Foundation Archive. The beginning of the story uses narration Goodall recorded for the Foundation in 1970. Later in the episode, audio from a Leakey Foundation lecture entitled “Cannibalism and Warfare in Chimpanzee Societies” is used to share Goodall’s observations of the events that happened at Gombe during the split and the ensuing violence.

Leakey Foundation grantee Joseph Feldblum sought to solve the mystery of the Four Year War by analyzing original field notes and data from Gombe using social network analysis. The study by Felblum and his colleagues determined the most likely causes of both the split and the war and this research reveals surprising similarities between the ways chimpanzee and human societies break down.

The next episode of Origin Stories will be released on November 29 and will feature a Leakey Foundation lecture given by Carl Sagan in 1977.

Subscribe today on Apple Podcasts or wherever you listen to podcasts. Click here to find all of our past episodes. 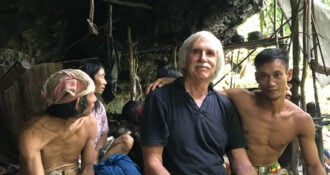