Lucy Had Neighbors: A Review of African Fossils 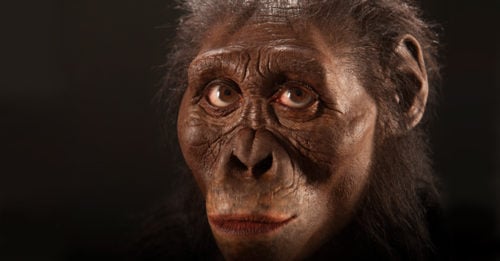 If “Lucy” wasn’t alone, who else was in her neighborhood? Key fossil discoveries over the last few decades in Africa indicate that multiple early human ancestor species lived at the same time more than 3 million years ago. A new review of fossil evidence from the last few decades examines four identified hominin species that co-existed between 3.8 and 3.3 million years ago during the middle Pliocene. A team of scientists compiled an overview that outlines a diverse evolutionary past and raises new questions about how ancient species shared the landscape.

The perspective paper, “The Pliocene hominin diversity conundrum: Do more fossils mean less clarity?” was published June 6, 2016, as part of a Human Origins Special Feature in the Early Edition of the Proceedings of the National Academy of Sciences. 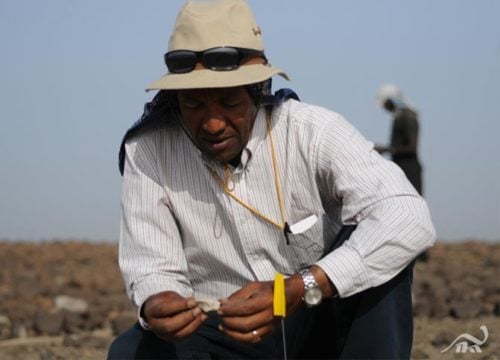 Authors Dr. Yohannes Haile-Selassie* and Dr. Denise Su of The Cleveland Museum of Natural History and Dr. Stephanie Melillo* of the Max Planck Institute for Evolutionary Anthropology in Germany provide an up-to-date review of middle Pliocene hominin fossils found in Ethiopia, Kenya and Chad. The researchers trace the fossil record, which illustrates a timeline placing multiple species overlapping in time and geographic space. Their insights spur further questions about how these early human ancestors were related and shared resources.

“It is now obvious that more than one species of early hominin co-existed during Lucy’s time,” said lead author Dr. Yohannes Haile-Selassie, curator of physical anthropology at The Cleveland Museum of Natural History and seven-time Leakey Foundation grantee. “The question now is not whether Australopithecus afarensis, the species to which the famous Lucy belongs, was the only potential human ancestor species that roamed in what is now the Afar region of Ethiopia during the middle Pliocene, but how these species are related to each other and exploited available resources.”

The 1974 discovery of Australopithecus afarensis, which lived from 3.8 to 2.9 million years ago, was a major milestone in paleoanthropology that pushed the record of hominins earlier than 3 million years ago and demonstrated the antiquity of human-like walking. Scientists have long argued that there was only one pre-human species at any given time before 3 million years ago that gave rise to another new species through time in a linear manner. This was what the fossil record appeared to indicate until the end of the 20th century. The discovery of Australopithecus bahrelghazali from Chad in 1995 and Kenyanthropus platyops from Kenya in 2001 challenged this idea. However, these two species were not widely accepted, rather considered as geographic variants of Lucy’s species, Australopithecus afarensis. The discovery of the 3.4 million-year-old Burtele partial foot from the Woranso-Mille announced by Haile-Selassie in 2012 was the first conclusive evidence that another early human ancestor species lived alongside Australopithecus afarensis. In 2015, fossils recovered from Haile-Selassie’s ongoing research site at the Woranso-Mille area of the Afar region of Ethiopia were assigned to the new species Australopithecus deyiremeda. However, the Burtele partial foot was not included in this species. 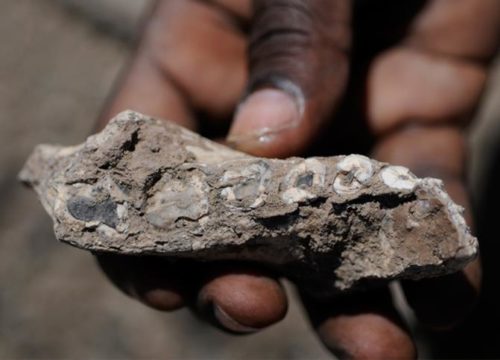 The left half of the lower jaw of Australopithecus deyiremeda (BRT-VP-3/14), a 3.5 to 3.3 million-year-old human ancestor species discovered by the Woranso-Mille project led by Dr. Yohannes Haile-Selassie, is discussed in a newly published review of African hominins from the middle Pliocene. Photo credit: Yohannes Haile-Selassie

“The Woranso-Mille paleontological study area in Ethiopia’s Afar region reveals that there were at least two, if not three, early human species living at the same time and in close geographic proximity,” said Haile-Selassie. “This key research site has yielded new and unexpected evidence indicating that there were multiple species with different locomotor and dietary adaptations. For nearly four decades, Australopithecus afarensis was the only known species — but recent discoveries are opening a new window into our evolutionary past.”

Co-author Dr. Denise Su, curator of paleobotany and paleoecology at The Cleveland Museum of Natural History, reconstructs ancient ecosystems. “These new fossil discoveries from Woranso-Mille are bringing forth avenues of research that we have not considered before,” said Su. “How did multiple closely related species manage to co-exist in a relatively small area? How did they partition the available resources? These new discoveries keep expanding our knowledge and, at the same time, raise more questions about human origins.”

Paleoanthropologists face the challenges and debates that arise from small sample sizes, poorly preserved prehistoric specimens and lack of evidence for ecological diversity. Questions remain about the relationships of middle Pliocene hominins and what adaptive strategies might have allowed for the coexistence of multiple, closely related species.

“We continue to search for more fossils,” said Dr. Stephanie Melillo of the Max Planck Institute for Evolutionary Anthropology in Germany. “We know a lot about the skeleton of Australopithecus afarensis, but for the other middle Pliocene species, most of the anatomy remains unknown. Ultimately, larger sample sizes will be the key to sorting out which species are present and how they are related. This makes every fossil discovery all the more exciting.”

The Woranso-Mille Paleontological project conducts field and laboratory work in Ethiopia every year. This multidisciplinary project is led by Dr. Yohannes Haile-Selassie of The Cleveland Museum of Natural History. Graduate and undergraduate students from Ethiopia and the United States of America also participate in the field and laboratory activities of the ongoing project.

The Authority for Research and Conservation of Cultural Heritage (ARCCH) of the Ministry of Culture and Tourism of the Ethiopian government annually issues fieldwork research permit to the Woranso-Mille project. The National Museum of Ethiopia and the Directorate of Collections, Curation, and Laboratory Services of ARCCH provide laboratory research facility and fossil storage space. The Afar Regional State, Mille District administration, and the local Afar people of Waki and Waytaleyta areas facilitate the fieldwork. The Woranso-Mille project field and laboratory work are financially supported by grants from The Leakey Foundation, the National Geographic Society, The Cleveland Museum of Natural History and the National Science Foundation.

Provided by The Cleveland Museum of Natural History.

One response to “Lucy Had Neighbors: A Review of African Fossils”

Journal Article
Strong social ties are a key driver of cooperation in many species and are associated with adaptive benefits in several of them, including humans, feral horses and dolphins. Although such bonds are widely observed, it is not always known why any two particular animals become friends (just as in humans).
« Upper Paleolithic Dietary Strategies
Twenty-Five Little Bones Tell a Puzzling Story About Early Primate Evolution »
« BACK TO BLOG