Evolution and the Mammalian Spine 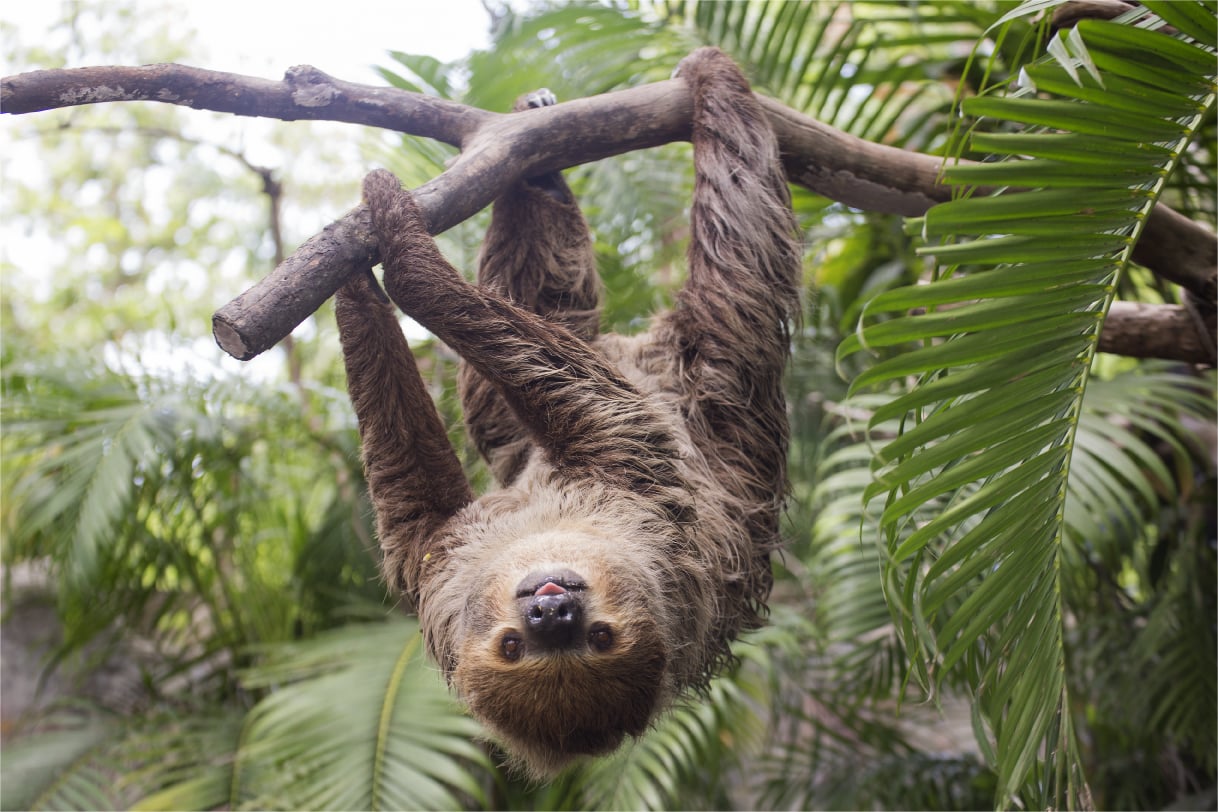 A two-toed sloth hangs from a tree branch. These sloths are adapted to moving upside-down through the forest canopy. Photo: kungverylucky/stock.adobe.com

Differences in numbers of vertebrae are most extreme in mammals which do not rely on running and leaping, such as those adapted to suspensory locomotion like apes and sloths, a team of anthropologists has concluded in a study appearing in the journal Nature Ecology & Evolution and funded in part by The Leakey Foundation.

Previous research had posited that running speed specifically determines variation in vertebral numbers–a conclusion not supported by the new work.

“The classic body plan of many mammals is built on a mobile back and this body plan is conserved regardless of running speed,” explains New York University anthropologist and Leakey Foundation grantee Scott Williams, the paper’s senior author. “More specifically, we find that a particular type of locomotor behavior–suspensory locomotion, which involves hanging below tree branches, rather than speed–is associated with increases in variation in numbers of vertebrae across mammals.”

The work centers on an effort to better understand why certain aspects of mammals remain consistent over time–a phenomenon known as evolutionary stasis.

Despite the diversity evolution has yielded, there remain consistencies across a wide range of distantly related organisms. Of particular note is the number of neck (cervical) and back (thoracic and lumbar) vertebrae of mammals. 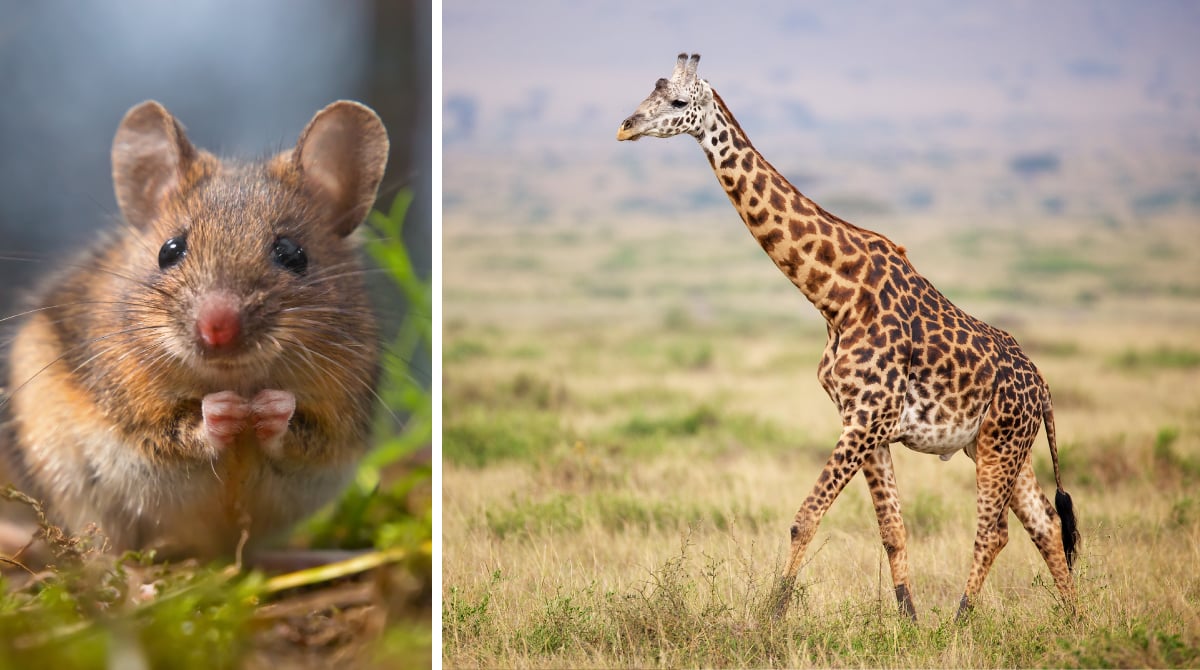 “Nearly all mammals have the same number of cervical vertebrae, no matter how long or short their necks are–humans, giraffes, mice, whales, and platypuses all have exactly seven cervical vertebrae,” explains co-author Jeff Spear, an NYU doctoral student.

In fact, the majority of mammals possess 19 or 20 thoracic and lumbar vertebrae, for a total of 26 or 27 “CTL” vertebrae (for “cervical, thoracic, and lumbar” vertebrae). There is little variation in these numbers, either within species or across different species–or even different species separated by over 160 million years of evolution. Humans, with 24 CTL, are one of the exceptions.

Earlier work had hypothesized that fast running constrains the number of CTL vertebrae in mammals and that slower mammals are freer to vary their CTL numbers, suggesting an association between speed and vertebrae count. However, this conclusion was based on data from a limited sample of mammalian diversity.

In order to learn what causes evolutionary stasis, and why there are exceptions, such as in humans, the scientists aimed to create a clearer picture using a larger and more diverse sample of mammals and phylogenetic methods–those that account for evolutionary relatedness in analyses.

In their study, they counted the vertebrae of thousands of individuals for nearly 300 species of mammals. The researchers then compared variation in the number of CTL vertebrae to traits such as speed, habitat, locomotion, spine mobility, posture, and limb use. 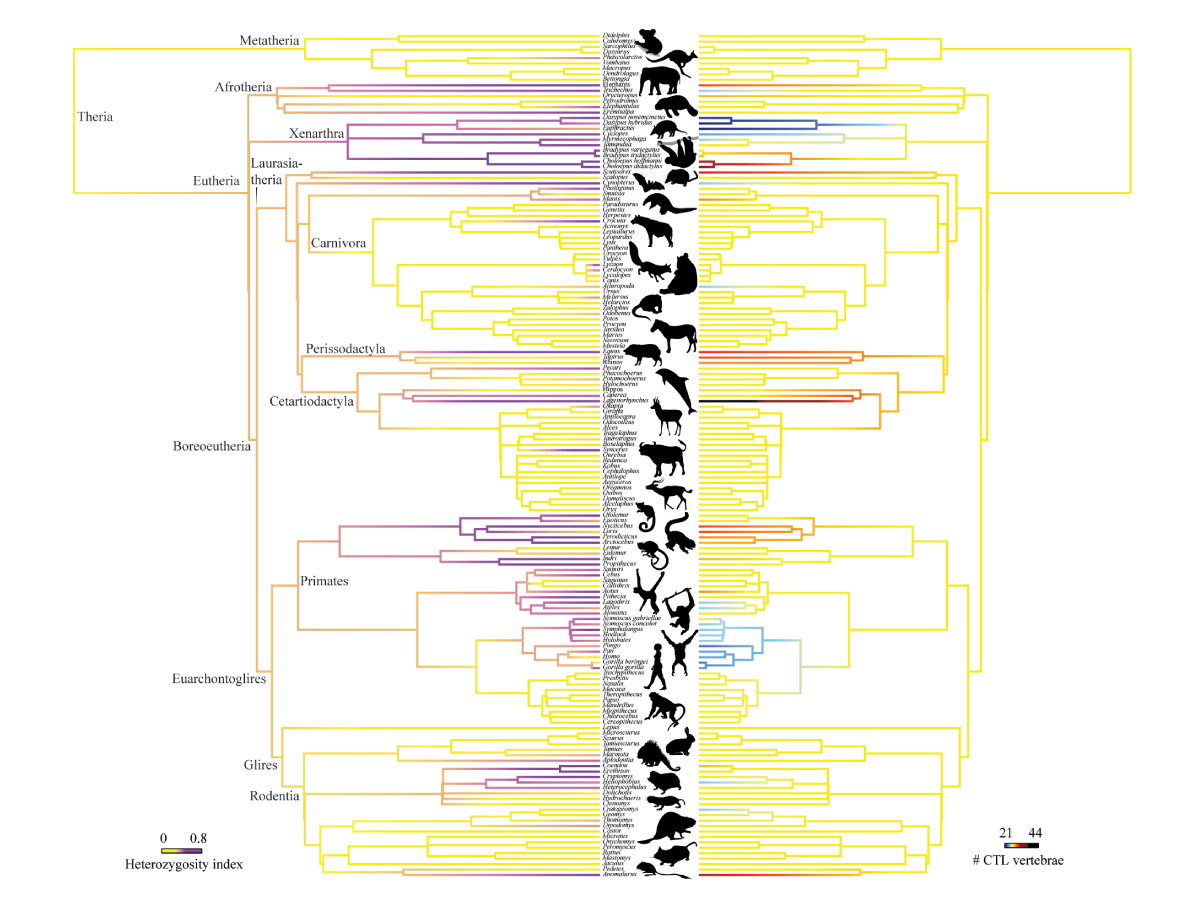 The analyses did not seem to show an association between vertebrae count and running speed. Rather, this trend was primarily driven by animals adapted to suspensory and other “antipronograde” behaviors, where limbs are held in tension during slow climbing, clambering, and suspension.

This observation led the researchers to hypothesize that the classic body plan of certain mammals–therian mammals, which give birth to live young–is built on a mobile back and that this body plan is conserved regardless of running speed.

This was based on an existing understanding of genetic activity relevant to vertebrae.

“Changes in types of vertebrae are determined by Hox genes–the genes that organize animal bodies along the head-tail axis, ensuring that your eyes go on your face and your legs go at the base of your torso,” explains Spear. “But changes in Hox gene expression sometimes creates vertebrae that are intermediate in type, which can impinge the mobility of the spine.”

For animals following the ancestral body plan, from possums to tigers, departures from the ancestral types of vertebrae in the back creates a risk of inefficient locomotion and are weeded out by natural selection, he adds.

Increased variation in numbers of presacral vertebrae in suspensory mammals

This research was supported by grants from the National Science Foundation (BCS-0925734) and The Leakey Foundation.

This article was provided by New York University. Click here to read more about this research in Jeffrey Spear’s “Behind the Paper” article.

Journal Article
Strong social ties are a key driver of cooperation in many species and are associated with adaptive benefits in several of them, including humans, feral horses and dolphins. Although such bonds are widely observed, it is not always known why any two particular animals become friends (just as in humans).
« National Parks Could Save Endangered Species
Bonobo Mothers Meddle in Their Sons’ Sex Lives – Making Them Three Times More Likely to Father Children »
« BACK TO BLOG