Bonobos Eat and Share Meat at Rates Similar to Chimpanzees

Growing evidence, including new observations by Leakey Foundation grantees, find that bonobo females control the meat, sometimes with a show of force.

A group of bonobos are seen up high in a tree with a captured Weyn’s duiker in the Congo’s Lomako Forest. Photo by Alexana J. Hickmott.

EUGENE, Ore. — April 30, 2019 — Small forest antelope in the Democratic Republic of the Congo have more to worry about than being eaten by leopards. In at least one portion of the forest, Weyn’s duikers are the preferred meat consumed by bonobos, according to anthropologists.

Based on observations made over six months in a 16-square-kilometer (9 square miles) area of the Lomako Forest, researchers from the University of Oregon and Northern Kentucky University found that female-dominated bonobos capture and consume meat at higher rates than previously believed and at the same frequency as male-dominated chimpanzees. Most research on the evolution of food consumption and sharing among apes has focused on chimps, with such behavior in bonobos rarely seen.

In a study published in the journal Folia Primatologica and supported in part by The Leakey Foundation, the research team also documented that female bonobos keep possession of carcasses and become aggressive, especially against adult males trying to take pieces of meat, but they also show tolerance and share with subadult males.

In one instance, an adult male seeking to retain control of a carcass was seen running away from a group while holding it, said co-author Alexana J. Hickmott, a University of Oregon doctoral student. In another, a female controlling a carcass punched a persistently begging young male in the face with a closed fist, she added. 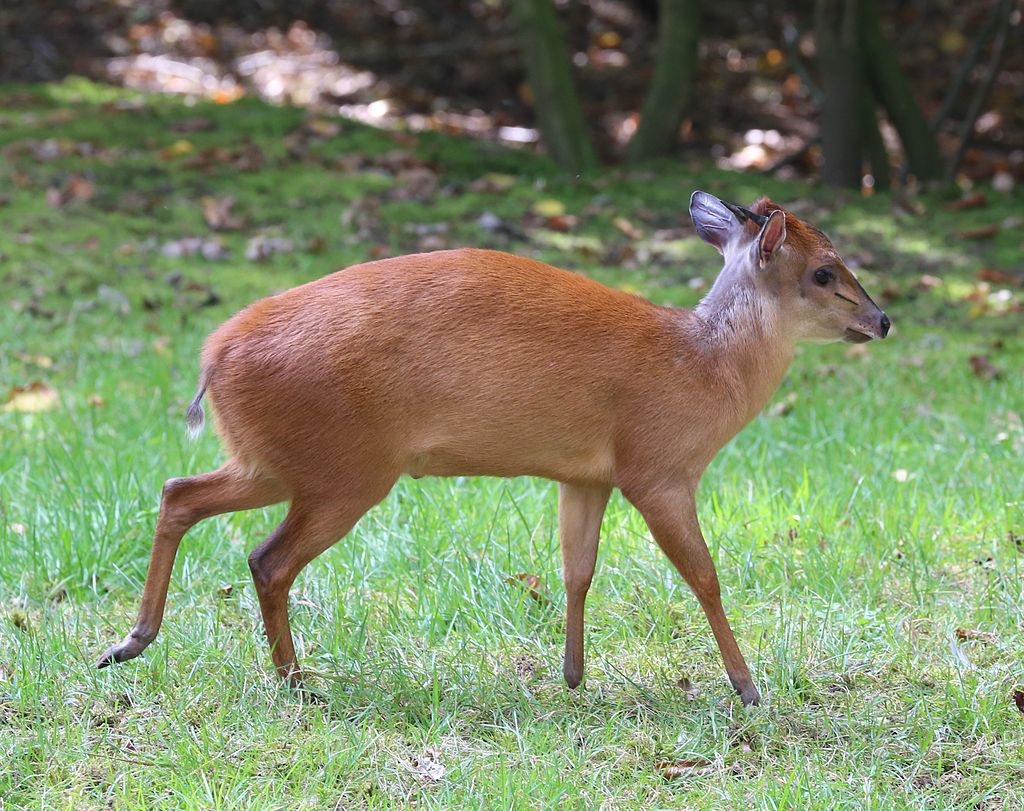 Duikers weigh about 17 kilograms (37 pounds) and measure barely 100 centimeters (just over 3 feet) in length. They are easily carried by bonobos both along the ground and up onto tree branches.

“Bonobos are a type of chimpanzee, and we are continuing to assess the differences between these different species,” said Colin M. Brand, a doctoral student of co-author Frances White, an anthropologist who has been studying bonobos in the difficult-to-reach forest since 1983. “We are finding a lot of similarities and some key differences. Meat-eating seems to be a very similar behavior of both species in terms of the rate at which they do it.”

And such similar behavior by the two species, which diverged from a common ancestor almost 2 million years ago, is surprising some researchers, White said. Chimps have a broad range in much of Africa, but bonobos live only in the forest along the big bend of the Congo, the world’s ninth-longest river.

“People often think of bonobos as hippy apes, that they make love not war,” White said. “That’s fine at some level, but it also is a gross miscategorization. In general, it doesn’t pay to be aggressive for bonobos, but when it does they can be just as aggressive as chimps.

“It depends on where they are at,” she said. “Bonobos will attack humans, but people don’t like to hear that. People want to hear that bonobos are kind, are sweet, and much like animals that we have domesticated. But that’s not true. Some of the nastiest fights seen have been among bonobos.”

Team members recorded meat-eating led by female bonobos on three occasions. They inferred another event from duiker hair-filled fecal samples. They also saw bonobos fleeing a carcass. While the team only witnessed events involving duikers, bonobos are also known to eat some birds, monkeys, and hyrax, which are small mammals similar in build to guinea pigs and marmots.

Bonobo meat preferences may vary across their habitats, driven by broken or heavy forest and possibly by the cultures developed by bonobo groups in differing areas of the Congo, said White, three-time Leakey Foundation grantee, head of the Department of Anthropology and curator of primate osteology at the Museum of Natural and Cultural History at the University of Oregon.

“It’s interesting that bonobos do these behaviors and at a rate similar to chimps,” Hickmott said. “But you also see variation across bonobo sites in both meat-consumption and meat-sharing. To understand the behavioral variation, we need to know more about how these behaviors differ across locations.”

The study was supported by a grant from The Leakey Foundation to Wakefield and a grant from National Geographic Society to Brand. Wakefield also received funding from programs at Northern Kentucky University. Brand also received a Global Oregon Graduate Research Award from the Global Studies Institute in the UO’s Office of International Affairs.

10.24.22 Journal Article, In the News
Ancient genomes of thirteen Neanderthals provide a rare snapshot of their community and social organization.
SEE MORE

09.15.22 Journal Article
A team of scientists has discovered the earliest gibbon fossil, a find that helps fill a long-elusive evolutionary gap in the history of apes.

08.24.22 Journal Article
Some scientists suggest early humans and their ancestors also evolved due to rapid changes in their environment, but the physical evidence to test this idea has been elusive – until now.
« New Species of Early Human Discovered in the Philippines
National Parks Could Save Endangered Species »
« BACK TO BLOG