By poring over the fossilized skulls of ancient wildebeest-like animals (Rusingoryx atopocranion) unearthed on Kenya’s Rusinga Island, researchers funded in part by The Leakey Foundation have discovered that the little-known hoofed mammals had a very unusual, trumpet-like nasal passage similar only to the nasal crests of lambeosaurine hadrosaur dinosaurs. The findings reported in the Cell Press journal Current Biology on February 4 offer “a spectacular example” of convergent evolution between two very distantly related taxa and across tens of millions of years, the researchers say.

“The nasal dome is a completely new structure for mammals– it doesn’t look like anything you could see in an animal that’s alive today,” says Haley O’Brien of Ohio University, Athens. “The closest example would be hadrosaur dinosaurs with half-circle shaped crests that enclose the nasal passages themselves.” 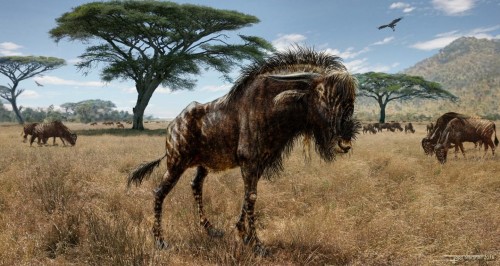 This evolutionary convergence may be explained by similarities in the way Rusingoryx and hadrosaurs lived. In fact, hadrosaurs are sometimes referred to as the “cows of the Cretaceous.”

For Tyler Faith of the University of Queensland, one of the study’s corresponding authors, it all started in 2009. He and his colleagues were working on a field program in the Lake Victoria region when other scientists directed them to a site they called Bovid Hill. The hill had been so named because of an abundance of fossil Bovidae, the group including antelopes and buffaloes, eroding from its surface.

“After several years of collecting fossils from Bovid Hill, it became very clear that most of the fossils belonged to the poorly known species Rusingoryx atopocranion, described from the same site in 1983, and that we may be dealing with an entire herd that was somehow wiped out and buried at the site,” Faith says.

The researchers also uncovered stone tools and butchered bone, raising the possibility that early modern humans had something to do with the peculiar concentration of Rusingoryx skeletons. In 2011, study co-author Kirsten Jenkins of the University of Minnesota took charge of excavations, hoping to find more complete fossils and to establish why so many skeletons had ended up in that spot. Along the way, she found several intact skulls.

“I was astonished to see that [the skulls] looked unlike any antelope that I had ever seen–the only thing more surprising would have been fossil zebras with horns growing from their heads!” Faith says. “The anatomy was clearly remarkable.”

Faith and O’Brien later decided to explore the anatomy further in six skulls representing Rusingoryx juveniles and adults. The similarity to hadrosaurs was immediately clear to the researchers when they opened CT scan files revealing the inner structures of those bones.

“We were expecting the inside of the dome to have something closer to normal mammalian anatomy, but once we took a look at the CT scans, we were pretty shocked,” O’Brien says.

At first, the researchers thought the hollow nasal dome might have had something to do with thermoregulation. Now, based on their anatomical investigations together with acoustical modeling, they think the trumpet-like nasal tube may have allowed Rusingoryx to deepen its normal vocal calls. In fact, their calculations suggest that the animals might have been able to call at levels very close to infrasound, such that other animals may not have been able to hear individuals in the herd calling back and forth to each other.

Both Rusingoryx and hadrosaur dinosaurs are thought to have been highly social, O’Brien explains. They might have communicated with each other across fairly large distances.

“Vocalizations can alert predators, and moving their calls into a new frequency could have made communication safer,” she says. “On top of this, we know that [both] Rusingoryx and hadrosaurs were consummate herbivores, each having their own highly specialized teeth. Their respective, remarkable dental specializations may have initiated changes in the lower jaw and cheek bones that ultimately led to the type of modification we see in the derived, crest-bearing forms.”

The researchers say they will continue to explore the developmental shifts required to produce the animals’ bizarre morphology. They’d also like to understand what ultimately led the once-thriving Rusingoryx to disappear. 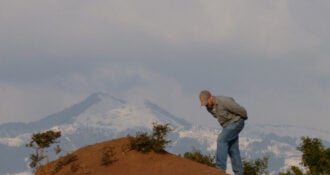 Journal Article
A 13-million-year-old fossil unearthed in northern India comes from a newly discovered ape, the earliest known ancestor of the modern-day gibbon. The discovery was made by Leakey Foundation grantee Christopher C. Gilbert, Hunter College. It fills a major void in the ape fossil record and provides important new evidence about when the ancestors of today’s gibbon migrated to Asia from Africa.
« Group structure predicts variation in proximity relationships between male–female and male–infant pairs of mountain gorillas
A Simple Method for Reliable Creation of 3D Artifact Models in the Field »
« BACK TO BLOG