Amelia Villaseñor was awarded a Leakey Foundation research grant during our spring 2015 cycle for her project entitled “The biogeography and behavioral ecology of hominins in Pliocene Eastern Africa:  A macroecological perspective.”

The East Africa rift valley well known as the home to some to some of our most famous hominin ancestors: from Lucy to the Nutcracker man to the Turkana boy. Less well known are the decades of paleoecological data that accompany these finds. For every hominin fossil, hundreds of mammalian fossils are collected and documented, from hyenas to hyraxes, which make up the mammalian “community” of which hominins were a part and provide important environmental information. These decades of fossil data, combined with geochemical data from sediments in which fossils are found, were begging to be compiled and provide new insight into the ecology of early hominins.

This is where I come in. 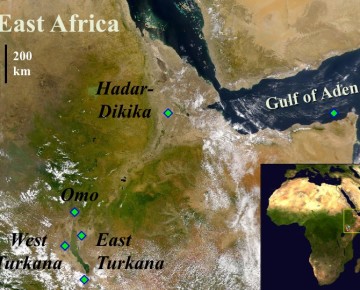 Map of study sites correlated by the Tulu Bor tuff to 3.42Ma

My research investigates how expanding savanna environments influenced early hominin ecology (circa 3.5 million years), including behaviors such as exploiting a new dietary niche and stone tool use. Recent work suggests that the answer to this question is not straightforward since different ecological proxies, such as fossils and isotopes, tell different stories. For example, paleoecological reconstructions from soil isotopes conducted in the eastern African Afar and Turkana basins found that landscapes were more open during earlier time periods (~4.4 million years ago) and became a more woody “mosaic” during the time period of this study (3.6–3.2 Ma). The complex part of the story, however, is that Australopithecines, such as Lucy, and other contemporaneous hominin species begin to incorporate resources from more open environments, such as grasslands, during these more woody time periods. One way to begin to understand how ancient environmental conditions may have affected hominin behavior is to understand the variation of environments and mammalian communities across space. My dissertation research thus seeks to bring some clarity to this picture by comparing the ecology of several rift valley sites in Ethiopia and Kenya where we have hundreds of mammalian fossils from this period. Specifically, I am comparing fossil and isotope data (from both soil and teeth) that I collect from East Turkana, Kenya to data from West Turkana, the Omo-Shungura, Ethiopia and Hadar/Dikika, Ethiopia. These sites are temporally correlated by a volcanic tuff that dates to 3.42 million years old. The proposed research will make a substantial impact on the discussion of how ancient environments affected early hominin behavioral ecology by illuminating how contemporaneous hominin sites vary across space. In particular, stone tool use is one of the hallmarks of human uniqueness and recent discoveries of tool use in West Turkana, Kenya and Dikika, Ethiopia at 3.3Ma and 3.4Ma, respectively, make these regions a point of particular interest for understanding the ecology and biogeography of early hominins to give context to these early, distinctive behaviors.

Grantee Spotlight
What makes humans such "adaptable" and flexible creatures, especially when it comes to what we eat? Primates, in general, can survive on a wide variety of foods, but there are also a lot of species with a range of really specialized diets, like those focused on insects, leaves, or fruit, and all of these foods have different challenges when it comes to digesting them. Mareike Janiak's research is focused on understanding how the species in these different dietary niches have adapted to digesting their foods.
« Grantee Spotlight: Iulia Badescu
Grantee Spotlight: Shannon McFarlin »
« BACK TO BLOG