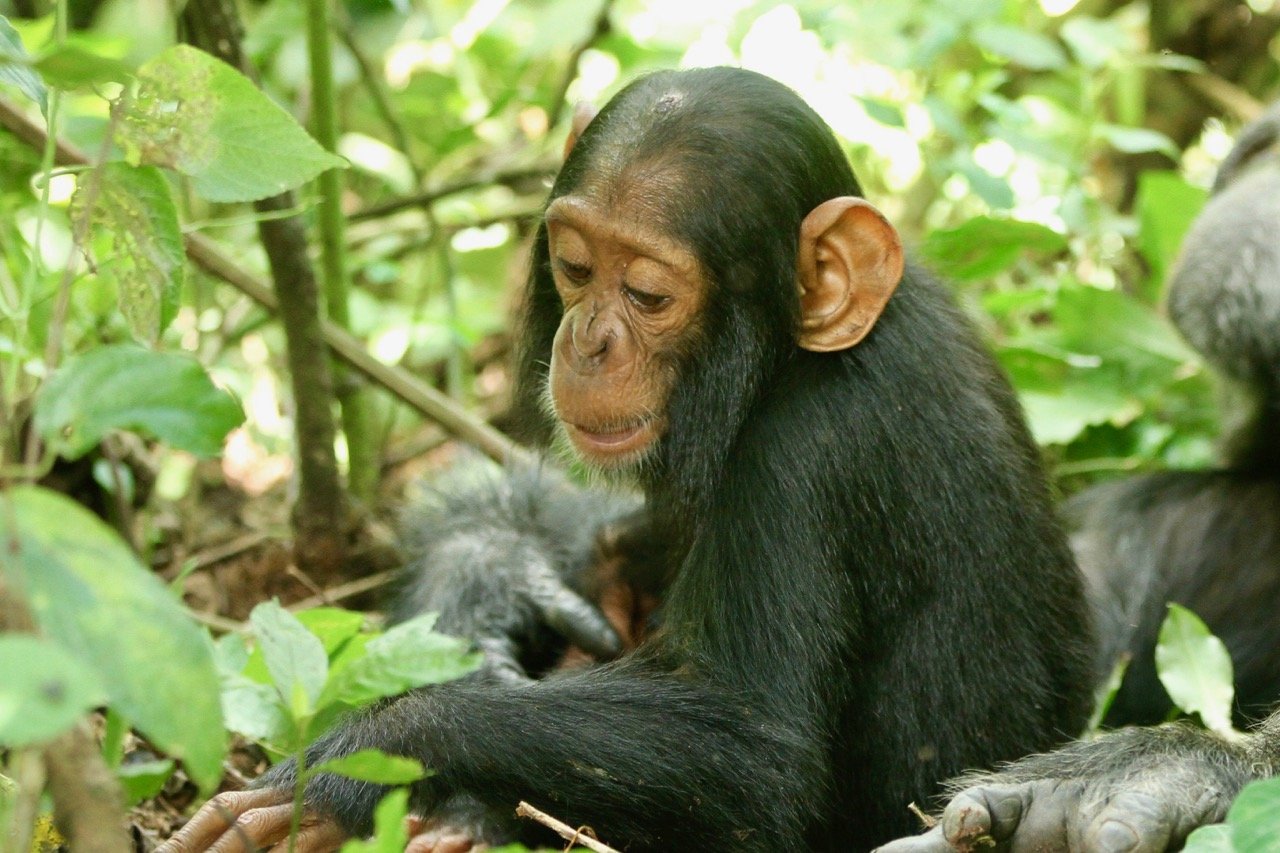 This 2-year-old chimp named Betty succumbed to a human common cold virus in Uganda. The opportunity to retrieve Betty’s body before it decomposed or scavengers set in was critical to making the discovery. Photo: Richard Wrangham

MADISON- Less than two years after the first report of wild chimpanzees in Uganda dying as a result of a human “common cold” virus, a new study has identified two other respiratory viruses of human origin in chimpanzee groups in the same forest.

Writing this week (Jan. 17, 2019) in the journal Emerging Microbes and Infections, a team led by Tony Goldberg, a University of Wisconsin–Madison professor in the School of Veterinary Medicine and an expert on emerging pathogens in animals, describes two simultaneous outbreaks of respiratory illness in chimpanzees in the wild, one of which was lethal. Goldberg is also associate director for research at UW–Madison’s Global Health Institute. 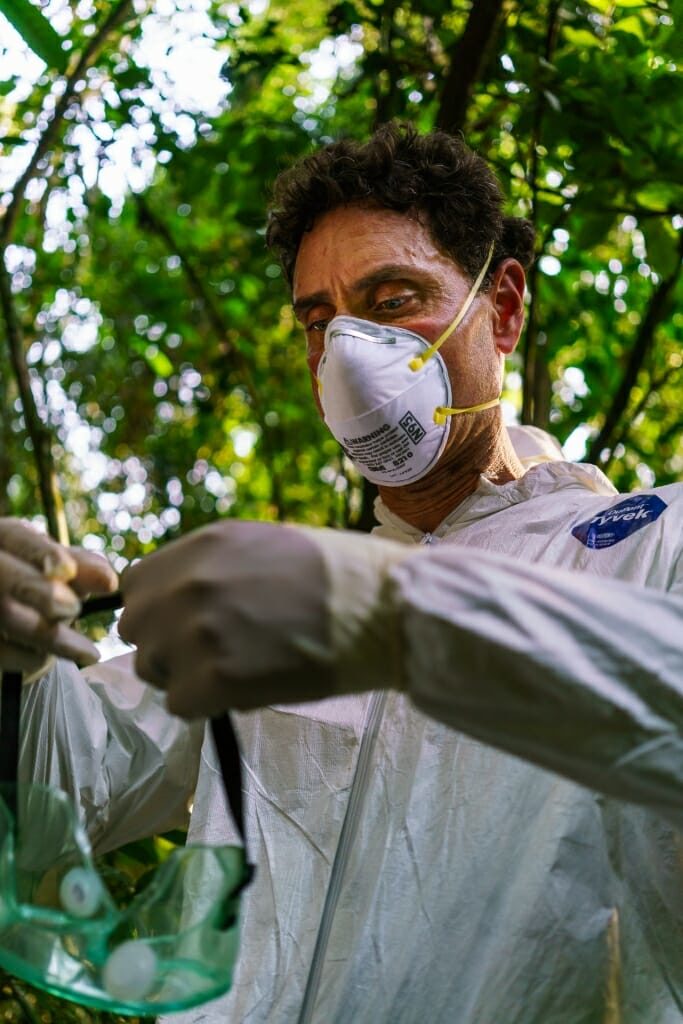 The outbreaks affected different chimp communities in the same forest at the same time, between December 2016 and February 2017, prompting suspicion that the outbreaks had a common cause.

One group, consisting of 205 chimpanzees known as the Ngogo community in Uganda’s Kibale National Park, was especially hard hit, with almost 44 percent of the animals in the group suffering from respiratory illness. Twenty-five chimps in the Ngogo group died during the outbreak. The other group of chimpanzees, known as the Kanyawara community and consisting of 55 animals, experienced an outbreak where a little more than 69 percent of animals were affected by respiratory illness. In contrast to the Ngogo group, no animals from the Kanyawara community died of the disease.

In both instances, scientists caught a break through the quick recovery of the bodies of deceased chimps for post-mortem exams by veterinarians, allowing for “a rare direct comparison.”

“Other than that,” says Goldberg, “the pathology in both chimps was consistent with viral disease of the respiratory tract, which is what the epidemiology suggested.”

Viral genetic material from the Ngogo chimps revealed infection by metapneumovirus, which is known to cause deadly disease in chimps across Africa. Surprisingly, the Kanyawara chimps contained the genetic material of a different virus, parainfluenza virus 3.

“This was really shocking,” says Goldberg. “At the time, we were convinced that the same virus must have been causing both outbreaks, especially considering that the outbreaks were happening at exactly the same time.”

Parainfluenza virus 3 is a common cause of croup in preschool children. In people, metapneumovirus (MPV) is a common cause of “wheezing illnesses” in infants, explains James Gern, a co-author of the new study and a professor of allergy and immunology in the UW School of Medicine and Public Health. 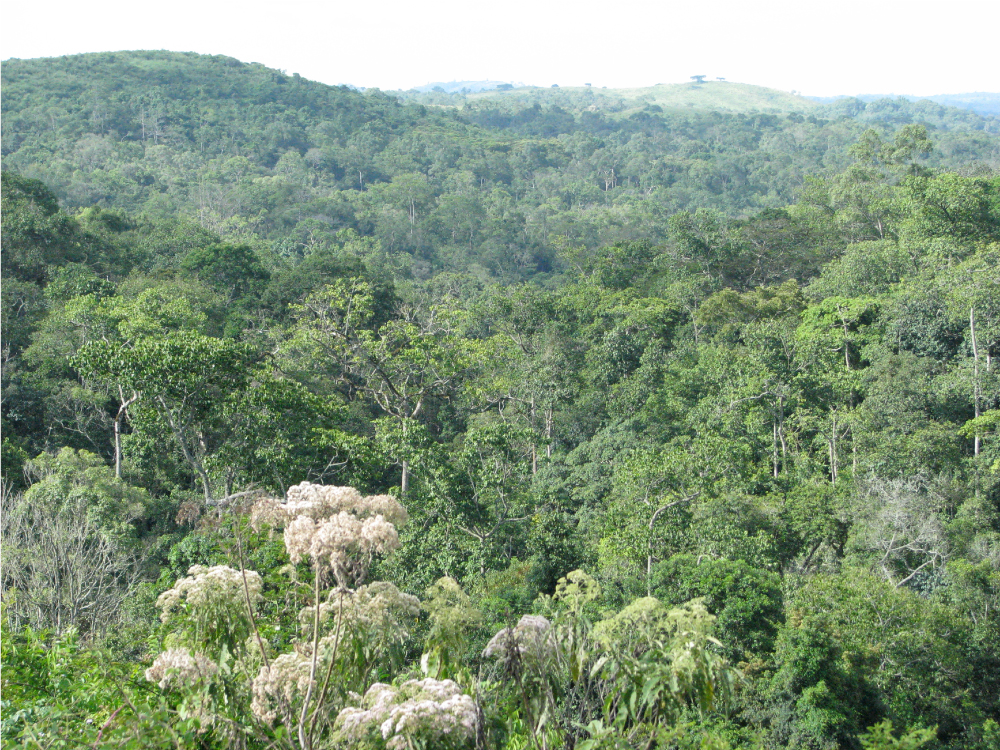 A view of the forest at Kibale National Park in Uganda. Photo by John Mitani.

“Mortality rates for MPV are very low in humans, so the chimps clearly had more severe illnesses than what is observed in humans,” says Gern, an authority on human respiratory viruses. “The parainfluenza virus 3 illnesses in chimps, while not associated with mortality, were on average more severe than what would generally be observed in humans. It is also remarkable that the majority of the chimp population was affected, suggesting that there was no preexisting immunity and that this virus was newly introduced, perhaps from a human source.”

“These are very common human viruses that circulate worldwide and cause ‘the sniffles’ in kids,” Goldberg affirms. “In people, they are no big deal unless the patient has asthma or another underlying condition…it seems like a plethora of common and mostly benign respiratory viruses of people can be transmitted to chimps in this part of the world, causing disease and sometimes death.”

In chimpanzees, however, the viruses were much more virulent, says Goldberg: “The chimps cough and sneeze and lie on the forest floor looking miserable. And they lose a lot of weight.”

Goldberg and Jacob Negrey, first author of the paper and a Ph.D. student at Boston University, were both on-site at the time of the outbreaks.

“It’s a horrible thing to see,” says Goldberg. “It’s heartbreaking to watch these animals suffer, not only from the disease but also from grief over the loss of members of their society.”

One infant chimp at Ngogo cried for hours after her mother died from the illness, Goldberg says. The baby clung to her mother’s body before finally wandering off to find the rest of the group.

According to Goldberg, a human origin for both viruses can be inferred because the viruses in the chimps were nearly identical genetically to common strains found in people.

A group led by Goldberg was the also the first to identify another human cold virus infecting and killing chimps in Uganda in late 2013 – rhinovirus C.

“The viruses responsible this time aren’t even remotely related to rhinoviruses,” Goldberg notes. “So, it seems like a plethora of common and mostly benign respiratory viruses of people can be transmitted to chimps in this part of the world, causing disease and sometimes death.”

Outbreaks such as these are common in wild African apes and metapneumovirus has been a common culprit. Although people are the sources of these viruses, it is not clear how they are getting into chimps.

“It could happen in any number of ways,” says Goldberg. “Local villagers, researchers, tourists, and many other people visit forests where apes live. All it takes is one person unwittingly carrying a ‘common cold’ virus to spark a deadly outbreak in apes.”

Governments and conservation groups across Africa are working to avoid similar outbreaks. Current regulations include quarantine periods for people entering the forest, the use of face masks and hand sanitizers, and strict policies about distances that tourists must keep from apes.

“The more we can learn about these outbreaks,” says Goldberg, “the better prepared we will be to prevent them and to protect the health of apes.”

This article was written by Terry DeVitt, University of Wisconsin-Madison

Journal Article
Strong social ties are a key driver of cooperation in many species and are associated with adaptive benefits in several of them, including humans, feral horses and dolphins. Although such bonds are widely observed, it is not always known why any two particular animals become friends (just as in humans).
« 2.4 Million Year Old Stone Tools Found in North Africa
Understanding Australopithecus sediba »
« BACK TO BLOG