Humanity originated on the African continent at least 300,000 years ago. We know from fossil evidence in southern Greece and the Levant (modern-day Israel) that some early members of our species expanded beyond Africa around 200,000 years ago, and again between 120,000 to 90,000 years ago. They likely travelled through the Sinai peninsula, which formed the only land bridge connecting the continent of Africa to the rest of the world, before moving north into a landscape with a Mediterranean climate.

But it was not known at what point humans turned south after crossing the Sinai peninsula, reaching modern day Saudi Arabia. It is also often assumed that they may have taken a coastal route, avoiding the currently harsh desert interior. Previous fossil finds show this was not the case, with humans moving into the heart of Arabia at least 85,000 years ago. Now, new research pushes this date back even further.

Colleagues and I discovered human and other animal footprints embedded on an ancient lake surface in the Nefud Desert in Saudi Arabia that are around 120,000 years old. These findings represent the earliest evidence for Homo sapiens on the Arabian Peninsula, and demonstrates the importance of Arabia for understanding human prehistory.

The Nefud Desert in modern-day Saudi Arabia lies around 500km to the southeast of the Sinai Peninsula. Today, the Arabian deserts are some of the most inhospitable environments in the world. They would form an impassable barrier for prehistoric humans or large mammals. Imagine standing at the foot of a hyper-arid desert equipped with stone tools and not much else. Could you get across? Probably not.

Scientific analysis shows that for most of their recent history, they were climatically similar to today: hyper-arid and impassable. But there is also evidence to show that at certain times in the past, the deserts transformed into savannah-like grasslands littered with freshwater resources. These “green” phases were likely short, probably lasting no more than a few millennia. Nonetheless, they provided windows of opportunity for humans and other animals to move into a new green landscape.

We know from fossil lake sediments that the Nefud Desert was one of those that periodically transformed into a more attractive landscape in the past, and the new footprints prove that early humans took advantage of one such window.

We were able to date the footprints by using a technique called luminescence dating to a period of time 102-132,000 years ago. Based on wider regional evidence for increased rainfall, we suggest they date to a period roughly 120,000 years ago, called the last interglacial.

We know that around this time that vast river systems spread across the Sahara Desert, with Middle Palaeolithic archaeology scattered along them. Other evidence for increased rainfall at this time comes from fossil stalagmites found in caves in desert regions in Arabia and ~500 km north of the Nefud in the Negev Desert. These features only grow in conditions where rainfall is greater than 300mm per year; substantially more than the amount (<90mm per year) they receive today.

While it is difficult to know for sure which species of human left these prints, we think they were most likely left by our own, Homo sapiens. This is based on the fact that Homo sapiens were present in the Levant, 700km to the north of the Nefud Desert, at a similar time. Neanderthals were absent from the Levant in this period and did not move back into the region until thousands of years later, when cooler conditions prevailed. Estimates of the humans mass and statue based on the footprints are also more consistent with our species than Neanderthals.

In addition to human footprints, elephant, horse and camel prints were also found. These footprints, studied in detail by Mathew Stewart at the Max Planck Institute for Chemical Ecology, provide a wealth of new information regarding prehistoric interactions between humans, animals and the environment.

Footprints are a unique form of fossil evidence as they provide precise snapshots in time that typically represent a few hours or days. This is a resolution we do not get from other records. They also allow us to understand the behaviour of their makers, which is something we cannot get from fossils.

This allows us to understand the relationship between humans and other large mammals at a geologically precise moment in time.

Environmental analysis on the lake sediments show that the lake contained fresh “drinkable” water, while the variety of footprints shows that humans, elephants, camels and horses were using this resource at a similar time. Human and large-mammal movements would have been closely tied to fresh water and the pattern of footprints show both foraged on the lake bed when it was temporarily exposed. Humans may have been drawn to the area as they tracked large mammals, who would potentially serve as prey.

Surveys and analysis of fossils recovered from the site also shows that there are no stone tools or butchery of fossils. This indicates that the footprint-makers only very briefly visited the lake, foraging for resources before continuing on their journey.

It is not clear what happened to the people who left the footprints, but evidence suggests that they, along with the other early Homo sapiens explorers, either died out or retreated to more favourable environments as aridity returned to the desert. 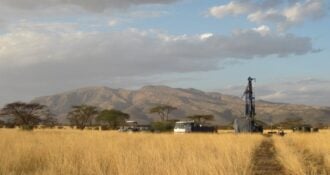 Journal Article
Strong social ties are a key driver of cooperation in many species and are associated with adaptive benefits in several of them, including humans, feral horses and dolphins. Although such bonds are widely observed, it is not always known why any two particular animals become friends (just as in humans).
« Male chimpanzees hang out as friends, but most social ties remain a mystery
Your cells look young for their age, compared to a chimp’s »
« BACK TO BLOG