By Amélie Beaudet, University of the Witwatersrand

Life is a copiously branching bush, continually pruned by the grim reaper of extinction, not a ladder of predictable progress.

Studying Australopithecus, an extinct hominin genus that represents a branch of our family tree, is an excellent way to make more sense of our bushy family tree, and understand better how species emerge, evolve and disappear.

We don’t yet know the identity of Homo‘s direct ancestor, but the most likely candidate is probably one of the Australopithecus species that lived in Africa between 4 and 2 million years ago. But it’s difficult to study the biology and history of Australopithecus; the fossil record for the genus is just too fragmentary.

There have been some major and exciting finds along the way. For example, the discovery of a partial Australopithecus – later nicknamed Lucy – in Ethiopia in 1974 provided valuable information. But Lucy’s skeleton is only 40% complete and lacks important elements – like a complete skull.

A more complete skeleton, named Little Foot by researchers, offers scientists a chance to fill in the gaps in their knowledge. A number of studies have been done on the skeleton over the past few years. My colleagues and I have added to this body of knowledge in a paper that explores Little Foot’s first cervical vertebra, also called the atlas.

Our paper sheds light on an important part of Australopithecus’s anatomy. It helps us understand better how these ancient hominins lived. The findings suggest that this specimen could climb and move in trees. But it may also have been able to walk on the ground. That echoes the results of a previous study we conducted, which focused on Little Foot’s inner ear. The same study also supports the hypothesis of a late emergence of human brain metabolism.

This sort of research brings us closer to our origins and contributes to a thorough portrait of the main characters in human evolutionary history. It also illustrates Gould’s description of our evolution as a “copiously branching bush”.

The first skeletal elements of Little Foot were unearthed from the Sterkfontein Caves near Johannesburg, South Africa, in 1994 and 1997. The caves are among the richest sites of fossil remains in the world and they form part of what’s known as the Cradle of Humankind.

After 20 years of meticulous excavations by Ron Clarke and his team, Little Foot turned out to be the most complete Australopithecus skeleton ever discovered: it is more than 90% intact. The specimen has been dated to 3.67 million years old.

Various anatomical studies have been recently conducted on Little Foot. For instance, we’ve virtually replicated the inner surface of the braincase to deliver information about brain size, shape and organization. We’ve also studied the shape of the inner ear, which is part of the balance system. The findings told us more about Little Foot’s brain and behavior.

Little Foot’s first cervical vertebra, or atlas, is nearly intact and represents a key component of Australopithecus’ biology because it connects the skull with the rest of the skeleton. It also plays a role in how blood is supplied to the brain via the vertebral arteries.

By studying it we’ve been able to understand more about how Australopithecus moved, specifically their heads and necks, and the blood flow that irrigated their brains. We turned our attention to it in a bid to confirm or contradict previous findings and to find out more about Australopithecus.

The cranial base was filled with sediments. These were physically removed and the skull was scanned using a technique called microtomography at the University of the Witwatersrand, in South Africa. This imaging technique is far more accurate than the classical medical imaging tools and provided us with high-resolution images of the vertebra that could be virtually extracted from the sediments.

Our main findings centered on Little Foot’s locomotion – the way it moved; the way this evolved over time; and, its brain metabolism.

First, what we discovered about Little Foot’s head and neck movements indicates that this specimen could climb and move in trees, but this does not exclude the possibility that it may also have walked on the ground. This finding is in accordance with results from our previous study about Little Foot’s inner ear.

Second, we compared the anatomy of Little Foot’s vertebra to two other Australopithecus specimens. One came from the same site as Little Foot, but from a different geological unit that is younger. The second specimen was found in the 1970s in Hadar, Ethiopia – the same site where Lucy was discovered.

The atlas of Little Foot is similar to the one of the Australopithecus specimen from Ethiopia. The additional specimen from South Africa, which comes from the geologically younger deposits of Sterkfontein, is more human-like. These observations could indicate that at least some earlier species of Australopithecus may have spent much more time in trees than the later representatives of the genus.

Finally, our estimation of blood flow supplying Little Foot’s brain shows that the energetic costs of Australopithecus’ brain were lower than those estimated in modern humans. This could be due to Australopithecus’ relatively small brain, a diet that incorporated less meat (and so provided less energy), or because other organs required more energy.

This confirms the late emergence of the human-like brain metabolism that previous studies suggested.

There is still more work to be done on Little Foot’s skeleton – we are planning more studies using the various tools offered by “virtual paleoanthropology”. These studies and others will help us to shed more light on a crucial part of human ancestry’s family tree. 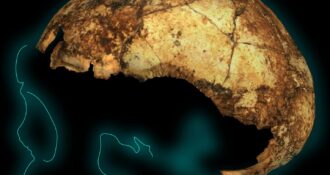 Journal Article
Nearly 2 million years ago, three hominin genera - Australopithecus, Paranthropus and the earliest Homo erectus lineage - lived as contemporaries in the karst landscape of what is now South Africa, according to a new geochronological evaluation of the hominin fossil-rich Drimolen Paleocave complex.
SEE MORE 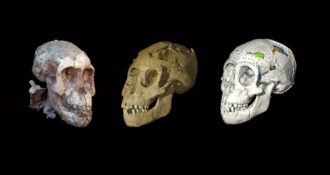 Baby steps: this ancient skull is helping us trace the path that led to modern childhood 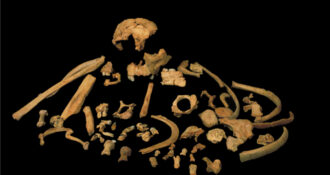 Journal Article
An important advancement in human evolution studies has been achieved after scientists retrieved the oldest human genetic data set from an 800,000-year-old tooth belonging to the hominin species Homo antecessor.
« Smallest Homo erectus cranium in Africa and diverse stone tools found at Gona, Ethiopia
Female chimps with powerful moms are less likely to leave home »
« BACK TO BLOG