This is the fourth in a series of posts about Sosthene Habumuremyi’s dissertation research on the hormonal correlations of socio-sexual behaviors in female mountain gorillas.

Sosthene’s research project combines behavioral data collected in the field with hormonal data analyzed in the lab. The results of this study will characterize the specific behavioral patterns around the time of ovulation in Mountain Gorillas; specifically mating behavior, patterns of mating solicitations, and any evidence of coercion (aggression) by the silverbacks directed towards the females.

We asked Sosthene a series of questions about his work and here are some of his responses. 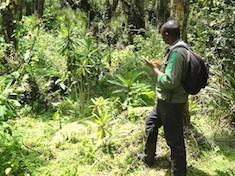 Q. Do you prefer working in the field or the lab? Please explain.

A. I prefer to work in the field because each day is different! I experience difficult and easy times which are both useful and part of the job! Mountain gorillas are exceptional primates which show many varieties in their way of living. When I am with them, I see more than I’m expecting to see. So, it is important for me to appreciate how our field protocol is still working and progressing; being in the field helps a lot with monitoring the project and profiling (in my mind) the potential findings. Besides, the field work is for me an opportunity to get an exact image of the work done in biodiversity conservation. As a researcher, it is an excellent occasion to bring a personal perspective.

I can not say that I do not like the lab, as our field data will be deciphered with the lab results! This combination of field work and lab analysis is the strength of this project.

Q. Is there one question from your list of research questions that you are most excited to find the answer? Can answering that question tell humans something about themselves?

A. It’s difficult for me to choose one question that I’ll be excited to answer! I’m really interested to find answers for all of our research questions. Those findings will raise certainly some curiosities in human reproduction biology. For example humans should be interested in knowing: what hormonal profiles exist during the conception in young and adult women; how this evolved from the common ancestor of primates; and what are normal profiles corresponding to critical fertility periods.

Q. Tell us about some interesting behavior you have witnessed by the gorillas while in the field.

A. The most impressive moment of my field work was the last week of October 2010 when the three silverbacks from Kuryama’s group were competing rashly for access to the females. Kuryama is a dynamic group of 15 individuals: Kuryama (chief, 24 years old), Kirahure (19 years old) and Vuba (17 years old) are all very large silverbacks! (They were also all born in the month of August.) The 3 suffered serious injuries due to the intra-group fights. We were thinking that Kuryama was loosing the dominance in the group, as he was aggressed by Kirahure, and even by the young Vuba. All of this behavior began when I was collecting behavioral data on a cycling female called Mahirwe.

She successfully solicited copulation to Kirahure, and after, Kirahure followed Mahirwe displaying incessantly. In one hour, I recorded 12 displays of Kirahure toward Mahirwe! At a certain time, Mahirwe climbed a tree, and Kirahure waited for her until she came down the tree! He went on following her, displaying and soliciting copulation…however, unsuccessfully!

From this day, me and other researchers recorded lots of aggressive behavior between those three males, and in addition when one silverback tried to solicit copulation to a favorite female of another male. In mountain gorilla groups, while females are rivaling for food and protection, males are actually challenging for access to the females!

Q. Are you noticing different results, trends or date between the nine social groups? Is one group of females more successful with producing offspring? Is one group less fertile?

A. There’s no clear difference in key-behavioral data from the target groups that we’re sampling. We will wait for statistical analysis to confirm or reveal what we can not be able to perceive now. However, we’re seeing that the small groups are growing and that one-male groups are well reproductively managed.

Q. Are there data, trends or conclusions you can share with the general audience?

A. Many conclusions will emerge after the lab analysis. But, we can say that reproductive behaviors are not restricted only in fertile window in mountain gorillas as it is the case in humans.

Category: : In the News
SUBJECT(S): primatology, in the news, behavioral

Journal Article, In the News
Leakey Foundation grantee Dr. Yohannes Haile-Selassie and his team of researchers have discovered a "remarkably complete" cranium of a 3.8-million-year-old early human ancestor from the Woranso-Mille paleontological site, located in the Afar region of Ethiopia.
Notes from the Field with Jill Pruetz »
« BACK TO BLOG