She was awarded a research grant by The Leakey Foundation in 2009.

Her dissertation research examines how the Turkana, an acephalous pastoral society in East Africa, solve the collective action problem in warfare. She also examines the scale of cooperation and norms in Turkana warfare, to evaluate the role of cultural evolutionary processes in shaping the scale of human cooperation. The following is an abstract of and link to the article in PNAS. 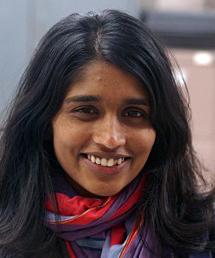 Abstract: Understanding cooperation and punishment in small-scale societies is crucial for explaining the origins of human cooperation. We studied warfare among the Turkana, a politically uncentralized, egalitarian, nomadic pastoral society in East Africa. Based on a representative sample of 88 recent raids, we show that the Turkana sustain costly cooperation in combat at a remarkably large scale, at least in part, through punishment of free-riders. Raiding parties comprised several hundred warriors and participants are not kin or day-to-day interactants. Warriors incur substantial risk of death and produce collective benefits. Cowardice and desertions occur, and are punished by community-imposed sanctions, including collective corporal punishment and fines. Furthermore, Turkana norms governing warfare benefit the ethnolinguistic group, a population of a half-million people, at the expense of smaller social groupings. These results challenge current views that punishment is unimportant in small-scale societies and that human cooperation evolved in small groups of kin and familiar individuals. Instead, these results suggest that cooperation at the larger scale of ethnolinguistic units enforced by third-party sanctions could have a deep evolutionary history in the human species.

Several articles were written on this paper, follow links below:

It is human nature to cooperate with strangers – NewScientist

Helping out strangers is hard-wired into human nature – i09.com

Grantee Spotlight
Harmonie Klein is a PhD candidate studying hunting and meat sharing among wild chimpanzees in Gabon. This community of chimpanzees is newly habituated to human presence and Klein is learning a lot about their cooperative behaviors.
« Studying Hormonal Stimuli in Mountain Gorillas Yields Many Clues
A visit with Leakey Grantees at Cambridge »
« BACK TO BLOG