The Evolutionary Benefits of Cooperation

This Being Human blog post is by Stuart West. 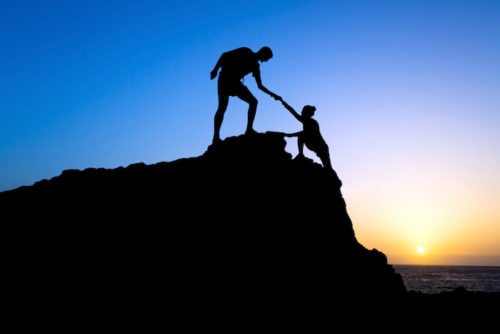 Why do we look after each other’s children, feed each other, and cover for each other at work? Such cooperation provides a problem from an evolutionary perspective. Darwin’s theory of natural selection tells us that we should expect animals to behave in the way that best transmits their genes to future generations. Cooperation is a potentially costly behavior that benefits other individuals, yet it abounds throughout the animal kingdom. One surprising driver of cooperative behavior may be competition.

Evolutionary theory says this problem has two types of solution. The first solution is that the cooperation has direct benefits to the individual. A famous example of this in humans is reciprocity, where people are more likely to help individuals that have helped them. In this case, helping is favored because, on average, a helper is more likely to receive help in the future. This idea is elegantly captured by the phrase, ‘You scratch my back and I’ll scratch yours.’

The second solution is that the cooperation is directed toward related individuals, who share the same genes. By helping a close relative reproduce, an individual is still passing copies of its genes onto the next generation, just doing so indirectly. This process of ‘kin selection’ is important for a wide range of cooperative behaviors across the natural world—pathogenic bacteria cooperate with relatives to break down the tissue of their hosts, cannabilistic newts avoid eating their siblings, and birds help rear the offspring of their close relatives. Indeed, kin selection is even responsible for the existence of multicellular organisms such as humans; we are only possible through the cooperation of the genetically identical cells that make up our bodies.

Paradoxically, one factor that may have been especially important in favouring cooperation  is competition, conflict, and even warfare between groups of humans. Imagine a primitive society where groups compete for limited resources. Now imagine that more cooperative groups are better able to compete for resources. Perhaps they coordinate their foraging behaviour more efficiently, or perhaps they form a more effective fighting unit.

However, that is not the only benefit of cooperation. Groups of humans in the primitive society that we are imagining are unlikely to be made up of a random collection of individuals. Instead, they are likely to contain relatives—a family group, a kin group, or maybe a village based around a small number of families. Consequently, the cooperative individual will be helping group members who are, on average, relatives. Not everyone need be closely related, just a decent fraction of individuals. The upshot of this scenario is that cooperation within competitive groups can also provide a kin-selected benefit.

This argument is deliberately simple. In reality, exactly when and why cooperation would be favored depends on numerous details about how competition takes place, the forms of cooperation that are possible, and the kin structure of groups. But the general point is that competition between groups would often be expected to favour cooperation within groups. The next question is, how would we test this hypothesis?

If we were studying some non-human species, we would do experiments to manipulate key parameters and measure the consequences. Perhaps we would make conflict happen more or less often, or perhaps we would supplement resource availability. By doing this, we would gradually build up a picture of the benefits and costs of cooperation, and hence determine why it had been favored. Unfortunately, at least from the perspective of an evolutionary biologist, such experiments are not possible with humans. Furthermore, we cannot look back in time to examine the situation when any cooperative behaviors of interest actually evolved.

However, one thing that we can do with humans is look for ‘footprints’ in our psyche that are consistent with a role of competition between groups. A number of elegant examples of such footprints are found in studies where people play games in the laboratory for cash rewards. A common scenario is that the game is arranged so that the players, as a group, would do better if they cooperated, but that each individual would maximize their cash reward by not cooperating. Such games are analogous to real-life situations, such as overfishing, that are often called the tragedy of the commons.

A very repeatable result is that if the experimenter gives group competition a greater emphasis, even if it doesn’t affect the cash payout, people cooperate more. So for example, if after each round of playing, you tell people the scores of the different groups, then they will cooperate relatively more with members of their group in the next round, even though they know that the group scores have no influence on the cash payouts. Furthermore, the urge to cooperate within group can be triggered much more subtly. Even placing some individuals in red T-shirts and others in blue T-shirts tends to make them cooperate more readily within their shirt-color group.

Such experiments suggest that competition between groups can be a potent driver of cooperation within groups of people. Of course, one implication is that this aspect of our psychology can be exploited, by playing up competition between group to make individuals behave more cooperatively. While examples abound from history, a particularly powerful illustration was provided by George Orwell in Nineteen Eighty-Four, where The Party uses a poster with a “monstrous figure of a Eurasian soldier” to unite the proles into “one of their periodical frenzies of patriotism.”

Stuart West is Professor of Evolutionary Biology in the Department of Zoology at University of Oxford.

Journal Article, Guest Post
Human beings used to be defined as “the tool-maker” species. But the uniqueness of this description was challenged in the 1960s when Dr. Jane Goodall discovered that chimpanzees will pick and modify grass stems to use to collect termites. Her observations called into question homo sapiens‘ very place in the world. Since then scientists’ knowledge of animal tool use has expanded exponentially.
« Why I am Excited to Run the San Francisco Marathon
Being Human: Born and Evolved to Run »
« BACK TO BLOG