Notes from the Field with Jill Pruetz 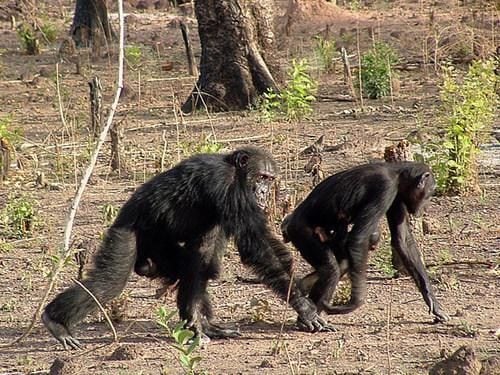 Chimps on the savanna in Senegal.

Some exciting events have occurred this month, including quite a bit of predation attempts by the Fongoli chimps as well as an encounter with a potential predator.

So far this year, we’ve recorded 37 tool-assisted hunting attempts on galago (or bushbaby) prey. This behavior peaks at the beginning of the rainy season at Fongoli, and this year is no exception. Newly-transferred adolescent female Lily is one of the top hunters, along with juvenile female Fanta. In all, most of the hunts have been by females, but a few young males and even one adult male have been observed hunting this year as well. I’m still hoping we surpass our record of 45 hunts seen in 2010!

In terms of the encounter with the potential predator, this was a very exciting end to a day. The chimpanzees had recently arrived at a small stream bed we call ‘Tukantaba’. I was following alpha male Lupin as my focal subject when I heard a younger chimp (probably adolescent male Luthor) give a warning vocalization that I didn’t recognize. All the chimps were instantly alert and looking across a grassland area to the woodland beyond. Suddenly, from the woodland, a female bushbuck came speeding past, continuing into the ravine area, crossing the stream bed and out of sight. The chimps were very agitated and they stood (some bipedal!) with their hair on end, still looking out over the grassland. I thought it odd that they were so upset by a bushbuck, and they normally give a different type of alarm call for this antelope and usually when they are surprised by one. However, within a few seconds, a spotted hyena appears from the woodland, chasing the bushbuck! The chimps immediately started warning calling at the hyena, and it turned tail and ran back where it came from! This was surprising to say the least, but then most of the chimps followed the hyena into the woodland, though they did not actually give chase.

I was yet again stunned when I heard a warning call from the chimps here, but this one sounded more like the call they give when they are surprised by something. Indeed, out of a thicket came a female patas monkey carrying her infant and running as fast as she could away from the chimps! Adolescent Lily gave chase, but there was no hope of catching the fastest primate, of course (although we have recorded adult male Siberut acquiring a young patas monkey by catching it in a tree). Finally, as I arrived back at the stream bed to search for Lupin, I found adult female Tia feeding on a bushbaby! Although I didn’t get to see Tia acquire it, adult female Nickel came along later and fashioned a tool to hunt in the tree cavity I assume Tia had found the bushbaby in (I had actually seen Luthor investigating the cavity when I followed most of the chimps out into the woodland after the hyena incident). Nickel did not get another bushbaby, although there are cases where there have been as many as three of these prosimians in one cavity. It wasn’t too long after that that the chimps began nesting, and I headed home after they were all settled down. It was one of the most exciting days I’ve ever had with the Fongoli chimps – and there have been many!

Dr. Jill Pruetz is the Walvoord Professor of Liberal Arts & Sciences in the Department of Anthropology at Iowa State. She is a Leakey Grantee and recently celebrated 10 years of the Fongoli Savanna Chimpanzee Project at her site in Senegal.

Category: : In the News
SUBJECT(S): primatology, in the news, behavioral

Journal Article, In the News
Leakey Foundation grantee Dr. Yohannes Haile-Selassie and his team of researchers have discovered a "remarkably complete" cranium of a 3.8-million-year-old early human ancestor from the Woranso-Mille paleontological site, located in the Afar region of Ethiopia.
« More Q&A with Sosthene Habumuremyi
Leakey grantees contribute to Chimpanzee »
« BACK TO BLOG