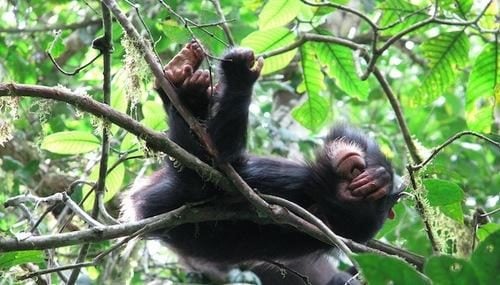 Did you know that grantees of The Leakey Foundation, as well as project sites funded by the Foundation, were part of this summer’s Disneynature documentary Chimpanzee?

The lead scientific consultant to the movie, Dr. Christophe Boesch, has been studying wild chimps for 30 years. During Boesch’s early years of research, The Leakey Foundation funded his work in Tai National Forest, where the film crew spent three years filming for this movie.

Today, Dr. Boesch is the Director of the Department of Primatology at Max Planck Institute for Evolutionary Anthropology, in Germany. In 1999, he founded the Wild Chimpanzee Foundation (WCF), with the mission “to enhance the survival of the remaining wild chimpanzee populations and their habitat, the tropical rain forest, throughout tropical Africa.” WCF hopes to reach this goal for 20-25,000 chimpanzees in the 17 countries in which they still exist in fairly intact habitat and to cover thereby the behavioral diversity of the species, still widely unknown today.

The Leakey Foundation has also helped fund the work of Dr. John Mitani, who served as a scientific consultant to the film. The film features footage of the chimpanzees Mitani has been studying in Kibale National Park, Uganda for nearly 20 years.

Dr. Mitani, who also serves on The Leakey Foundation’s Scientific Executive Committee, has said “the chimpanzees that I study are a large troop, about 180 strong, and with so many males, they frequently interact aggressively with other chimpanzees who live in neighboring groups”. This is why it was so unexpected that the film documents a special relationship between Oscar, “the star” of the film and Freddy the alpha male of Oscar’s group. Oscar, a young chimpanzee who is orphaned and left to fend for himself, is adopted by Freddy. This is a very rare occurrence that has never before been caught on film before now. Mitani explains that “orphaned infants are often adopted by older siblings, or by other members in their groups. But Freddy has no relationship that we know of to Oscar. That’s the mystery.”

Research like Dr. Boesch’s and Dr. Mitani’s has given us much insight into chimpanzee behavior. With continued research at long-term study sites like Tai and Kibale, researchers might be able to delve deeper into what set us apart from our closest living relative, the chimpanzee.

If you didn’t catch Chimpanzee in the theatre, you’ll soon be able to buy it. On August 21, 2012, Chimpanzee, debuts as a Blu-ray Combo Pack (Blu-ray + DVD), Digital and On-Demand viewing. To celebrate the in-home debut of the film, Disneynature will continue the “See Chimpanzee, Save Chimpanzees” conservation program which was initiated with the film’s theatrical release.

For every purchase of the movie through August 27, 2012, Disneynature will make a donation to the Jane Goodall Institute to conserve chimpanzee habitat, educate the next generation, and provide care for orphaned chimpanzees. Check the official Chimpanzee website for details.

Category: : In the News
SUBJECT(S): primatology, in the news

Journal Article, In the News
Leakey Foundation grantee Dr. Yohannes Haile-Selassie and his team of researchers have discovered a "remarkably complete" cranium of a 3.8-million-year-old early human ancestor from the Woranso-Mille paleontological site, located in the Afar region of Ethiopia.
« Notes from the Field with Jill Pruetz
Video: Dig Deeper: Adrienne Zihlman »
« BACK TO BLOG