We awarded Marian Hamilton a Leakey Foundation Research Grant during our fall 2015 cycle for her project entitled “Assessing philopatry and range size with strontium isotopes.” 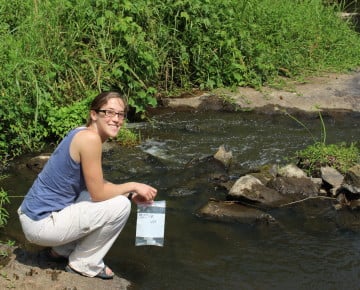 One of the most intriguing aspects of our hominin ancestors is also one of the most difficult to uncover: their social lives. As much as we might wish for it, social behavior just doesn’t fossilize the way that bones and teeth do! Paleoanthropologist are therefore left to look for indirect clues to reconstruct how hominins behaved. Strontium isotopes are one potential avenue for investigation. Strontium is an element that is found in all rocks and soils, as well as the plants growing from those soils and the animals eating those plants. Like all elements, strontium has different isotopic forms – while all still strontium, the isotope strontium-87 carries an extra neutron and is atomically heavier than the more common strontium-86. The ratio of the abundance of these two forms of strontium (86Sr/87Sr) varies based on the geologic formations underlying an area. Because animal tissues acquire the strontium isotope ratio of the food they eat, researchers can use strontium isotope ratios measured in the teeth and bones of animals to reconstruct where they were living and eating.

So how does this come back to behavior? Certain patterns of movement have direct implications for the social systems of primates. For example, sex-biased philopatric dispersal is a pattern by which one sex leaves their birth group at sexual maturity to find mates elsewhere. In chimpanzees, females leave their group while males stay with their mothers and brothers for life. In many monkey species, the opposite pattern is observed, with males departing and females remaining with kin. Strontium isotope ratios in teeth and bones could be a clue as to which pattern of dispersal fossil hominin species practiced, which is turn could tell us about kin-based coalition building, patterns of aggression and affiliation, mating systems, and more. Home range size is another socially-important mobility pattern that could be uncovered through strontium isotope analysis by examining intra-individual isotopic variation. 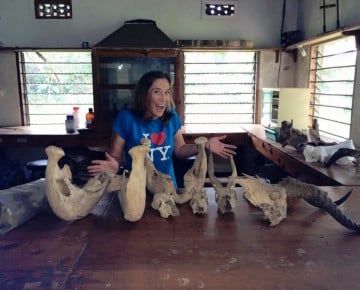 The problem, however, is that we do not yet know the details behind these theoretical correlations. My research will use a known population of primates and other mammals from Kibale National Park, Uganda, to test whether or not strontium isotopes in fact provide true signal for these mobility patterns, and if these patterns correlate with the social behaviors of the species involved. We have a fantastic collection of skeletons curated by the Kibale Chimpanzee Project, the Makarere University Biological Field Station, and the Semliki Chimpanzee Project helping us build a robust dataset to test these and other hypotheses. Stay tuned!