A new study provides evidence for hominins in ‘Green Arabia’ between 500,000 and 300,000 years ago alongside direct environmental data indicating productive, relatively humid grasslands. 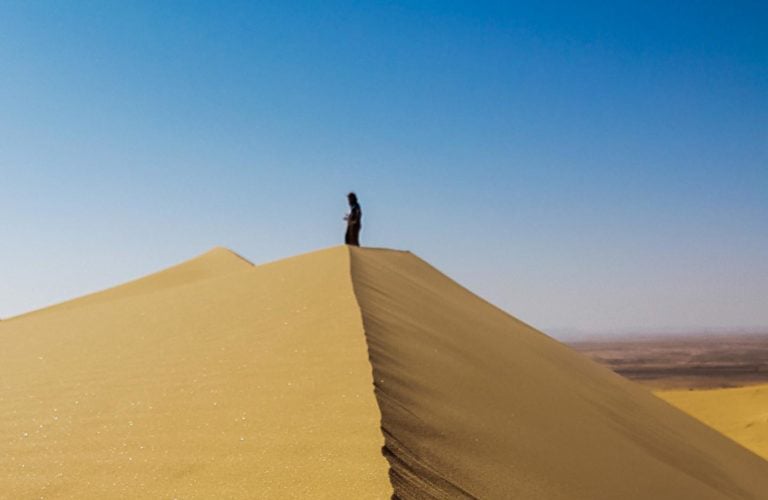 MAX PLANCK INSTITUTE FOR THE SCIENCE OF HUMAN HISTORY— A new study, led by scientists from the Max Planck Institute for the Science of Human History including several Leakey Foundation grantees, and published in Nature Ecology and Evolution, suggests that early hominin dispersals beyond Africa did not involve adaptations to environmental extremes, such as to arid and harsh deserts. The discovery of stone tools and cut-marks on fossil animal remains at the site of Ti’s al Ghadah provides definitive evidence for hominins in Saudi Arabia at least 100,000 years earlier than previously known. Stable isotope analysis of the fossil fauna indicates a dominance of grassland vegetation, with aridity levels similar to those found in open savanna settings in eastern Africa today. The stable isotope data indicates that early dispersals of our archaic ancestors were part of a range expansion rather than a result of novel adaptations to new environmental contexts outside Africa.

Studies of early and late dispersals of hominin populations beyond Africa are important for understanding the course of global human evolution and what it means to be human. Although the species that make up the genus Homo are often termed ‘human’ in academic and public discourse, this evolutionary group (or genus), which emerged in Africa around three million years ago, is highly diverse. Indeed, there is continuing debate as to what extent our own species Homo sapiens, which emerged in Africa around 300,000 years ago, showed unique ecological plasticity in adapting to novel environments compared to other hominin members in the genus Homo.

Distinguishing ecological settings for members of the genus Homo outside Africa

It has recently been argued that early Homo sapiens occupied a diversity of extreme environments, including deserts, tropical rainforests, arctic, and high-altitude settings, around the world. By contrast, the dispersals of other earlier and contemporaneous species of Homo, such as Neanderthals, appear to be associated with the generalized use of different forest and grassland mosaics in and among river and lake settings. A lack of palaeoenvironmental information has made it difficult to systematically test this idea and indeed a number of researchers maintain that non-Homo sapiens species demonstrate cultural and ecological adaptive flexibility.

In spite of its crucial geographic position at the crossroads between Africa and Eurasia, the Arabian Peninsula has been astoundingly absent from discussions about early human expansions until recently. However, recent analysis of climate models, cave records, lake records, and animal fossils have shown that at certain points in the past, the harsh, hyper-arid deserts that cover much of Arabia today were replaced by ‘greener’ conditions that would have represented an attractive setting for various hominin populations. 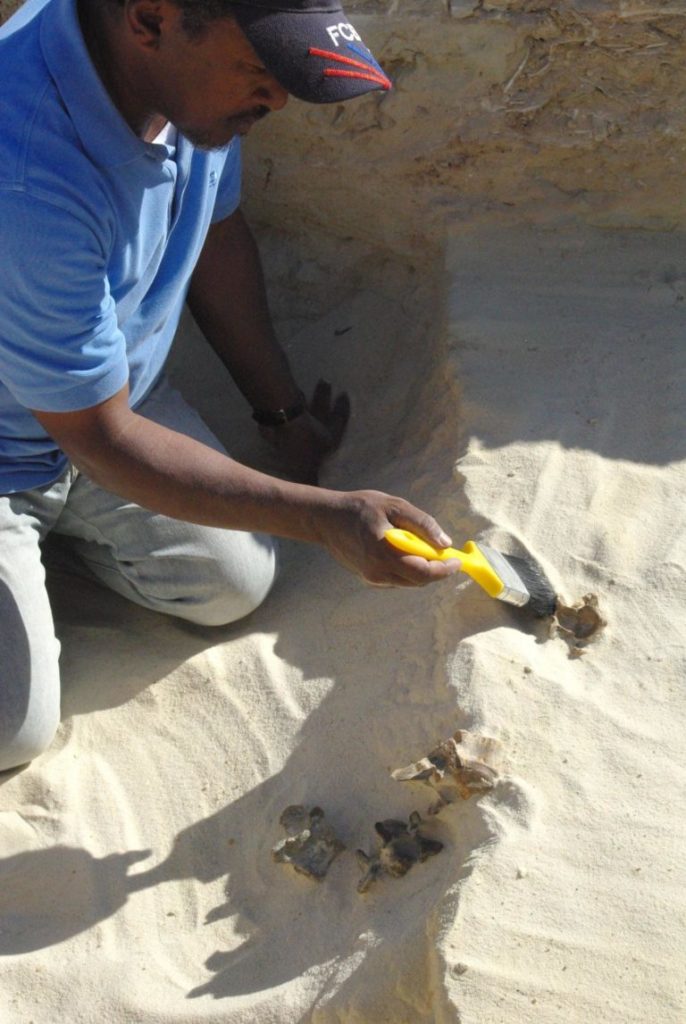 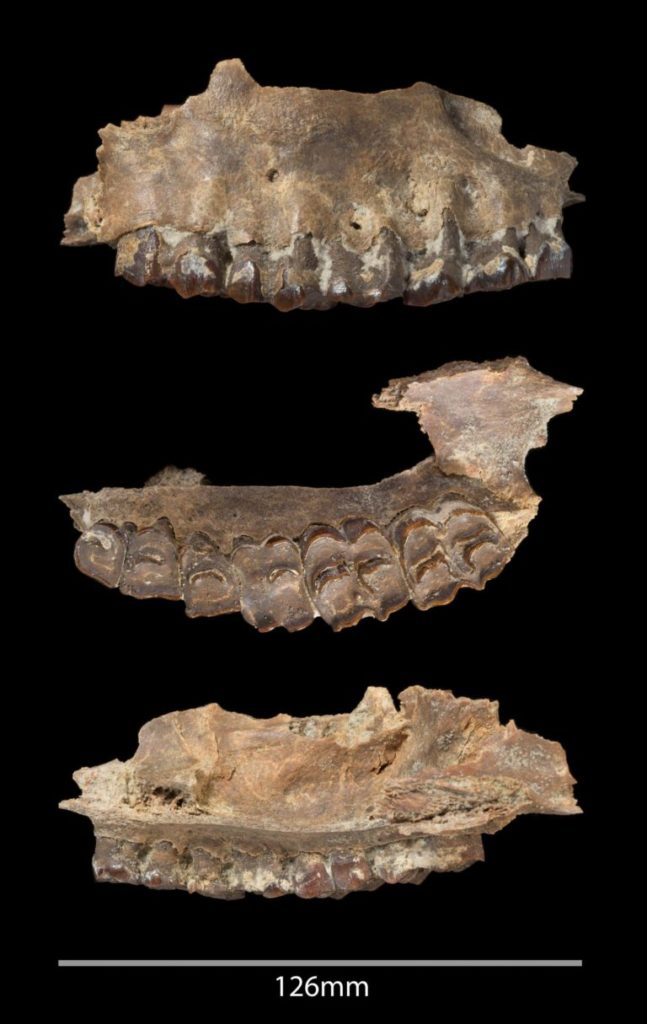 Following the ‘savanna’? Direct environmental evidence for first steps ‘Out of Africa’

In the current paper, the researchers undertook renewed archaeological excavations and analysis of fossil fauna found at the site of Ti’s al Ghadah, in the Nefud Desert of northern Saudi Arabia. As one of the lead authors, Leakey Foundation grantee Mathew Stewart says, “Ti’s al Ghadah is one of the most important palaeontological sites in the Arabian Peninsula and it currently represents the only dated collection of middle Pleistocene fossil animals in this part of the world and includes animals such as elephant, jaguar and water birds.” Until now, however, the absence of stone tools has made linking these animals with early hominin presence uncertain.

Significantly, the research team found stone tools alongside evidence for the butchery of animals on bones, confirming a hominin presence in association with these animals 500,000 to 300,000 years ago. Michael Petraglia, the principal archaeologist of the project and a co-author on the paper says, “This makes Ti’s al Ghadah the first, early hominin-associated fossil assemblage from the Arabian Peninsula, demonstrating that our ancestors were exploiting a variety of animals as they wandered into the green interior.”

The authors were also able to innovatively apply geochemical methods to fossil animal tooth enamel to determine vegetation and aridity conditions associated with the movements of our ancestors into this region. The stable isotope findings highlight the presence of an abundance of grass in all animal diets, as well aridity levels somewhat similar to those found in East African ‘savanna’ settings today. This information fits with analysis of the types of animals found on site and indicates the availability of significant amounts of water at certain points in time.

Implications for our understanding of changing human adaptive capacities

“While these early hominin populations may have possessed significant cultural capacities, their movement into this part of the world would not have required adaptations to harsh and arid deserts,” Dr. Patrick Roberts, the lead author of the paper, explains. “Indeed, the isotope evidence suggests that this expansion is more characteristic of a range expansion similar to that seen among other mammals moving between Africa, the Levant, and Eurasia at this time.” More detailed study of past environments, closely associated with different forms of hominin species in the Arabian Peninsula and elsewhere, should enable more refined testing as to whether our species is uniquely flexible in terms of its adaptations to varying environments.

The international consortium of researchers involved in this project is headed by the Max Planck Institute for the Science of Human History, in partnership with HRH Prince Sultan bin Salman and the Saudi Commission for Tourism and National Heritage. Additional partners include the Saudi Geological Survey, King Saud University and other key institutions in the United Kingdom and Australia.

This blog post was created with materials provided by the Max Planck Institute for the Science of Human History.

Journal Article, Behind the Science
Dozens of non-human primate species, including our closest relatives, are at risk for SARS-CoV-2 infection and are vulnerable to COVID-19, which could have devastating impacts on populations of primates that are already endangered.
« Neanderthal-like Features in 450,000-Year-Old Fossil Teeth from Italy
What Drove Africa’s Megaherbivores to Extinction? »
« BACK TO BLOG