Against Animal Natures: An Anthropologist’s View

Individual Differences Are Not Just for Humans Anymore

This Being Human blog post is by Barbara J. King. 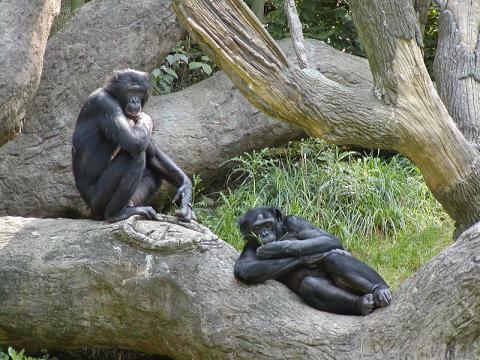 In the waters off Cape Cod, a humpback whale named Touché circled below a school of fish. According to a report in The New York Times, Touché caused a stream of bubbles to emerge from his blowhole; the bubbles acted like a net and effectively herded the fish into a contained area.

For using this smart feeding strategy, Touché was rewarded with a substantial meal. Yet the whale’s success isn’t the main story here—it’s the individual nature of his strategy. Other whales in his group capture fish using their own invented methods.

Dave Wiley, the director of the Stellwagen Bank National Marine Sanctuary in Massachusetts and a marine-biology tracker of the Cape Cod humpback whales, acknowledged to the Times reporter the exciting yet messy nature of this discovery: “We’ve got examples sometimes of hundreds of feeding events that are almost all identical for that particular whale but are different than the hundred feeding events that we have for a different whale. It’s frustrating and complicated and fascinating all at the same time.”

That quote nicely sums up a recent sea change not just in cetacean studies but in the field of animal behavior more generally. Rather than treating variability in some aspect of behavior—foraging, predation, social behavior, and so on—as pesky noise to be ignored in favor of data that’s aggregated across the species, population or group, scientists are embracing individuality as key to understanding what animals do.

Consider our closest living relatives, the chimpanzees and bonobos of Africa. Across the board, chimpanzees are more prone to violence than are bonobos: this species-level generalization is accurate, is useful to know, and shouldn’t be thrown out of the picture. But it doesn’t taken us far enough. Just as there’s no such thing as a single humpback-whale foraging strategy, there’s no such thing as thechimpanzee or the bonobo strategy to navigating conflict and cooperation.

Earlier this year I reviewed Among African Apes: Stories and Photos from the Field. A chapter on bonobos by primatologists Gottfried Hohmann and Barbara Fruth describes an altercation between a male named Volker and a female named Amy that drew in at least thirteen other bonobos and transformed the forest into a “battle ground.” With some degree of wonder, Hohmann and Fruth wrote, “The faces of the bonobos that we have known so well for several years now reflect emotions that we have never seen before.”

So much for any kind of fixed, sexy-pacific bonobo nature. In a similar way, some chimpanzee males are timid and avoid the status-striving, aggressive ways of their peers. Female behavior varies considerably as well, not only in maternal style but along other dimensions too.

The emerging big picture in animal-behavior studies these days rests on data taken from multiple and interacting levels. Individual animals also seem to express personality. For Alecia Carter, Anne Goldizen, and Robert Heinsohn, personality in the animal world refers to variation in behavioral tendencies that’s minimal within an individual but marked between individuals.

This means that a particular animal may be bold or timid in a relatively stable way over time and across different situations. Personality is seen not only in big-brained mammals like whales, chimpanzees, or bonobos, but in lizards called Namibian rock agamas and in wild eastern chipmunks.

Some species, like the cetaceans and great apes, show variation in behavior from group to group due to cultural transmission rather than to genetic or ecological constraints. Research at Chimfunshi Wildlife Orphanage Trust in Zambia, for instance, builds on and adds to earlier work showing that grooming patterns in chimpanzees vary in group-specific ways. The new report shows not only that a grooming “hand-clasp” posture is adopted in some groups and not others, but also that the look of that posture differs across the groups that do use it. One group holds hands, while another makes contact from wrist to wrist during grooming.

To understand the behavior of nonhuman animals, then, scientists nowadays may look for the expression of stable individual personality traits, the transmission of culture in group-specific ways, and the behavioral variability across individuals that I’m highlighting here. Frustrating and complicated and fascinating indeed!

All this new information adds up to a powerful message: that many nonhuman animals don’t have fixed natures. The limits of this finding are as yet unknown. Most animals alive on Earth are, after all, invertebrates. Based on work with honeybees, it seems probable that individual variability in bee, beetle, spider (and so on) behavior is completely molecular and thus different from the sort of variation than I’m addressing here.

Meanwhile, the new approach fits well with an established anthropological perspective on our own species. If there is no single way of being a chipmunk or a bonobo, there is certainly no single way of being human. We are the products of dynamic and messy interactions between biological and cultural forces. As anthropologist Agustin Fuentes put it, the ways in which we perceive the world, and act within the world, are neither natural nor the product of social forces alone; they are naturenurtural.

Our behaviors, then, are contingent, continuously changed by our interactions with other people, other animals, and the forces of the environment. They shift even as we ourselves are shaping other beings and the environment around us. In this way, a beautiful and complex dynamism emerges: What we become as we grow up and grow old is influenced by what happens in our families, our communities, and our cultures, but it is not fully predictable by these patterns.

In this way, we share a great deal with whales like Touché and apes like Volker. I find it wonderful to know that in our vital, contingent individuality, we are not alone on this Earth.

A biological anthropologist at the College of William and Mary, Barbara J. King writes for NPR’s 13.7 blog and is the author of the forthcoming book, How Animals Grieve.

Journal Article, Guest Post
Human beings used to be defined as “the tool-maker” species. But the uniqueness of this description was challenged in the 1960s when Dr. Jane Goodall discovered that chimpanzees will pick and modify grass stems to use to collect termites. Her observations called into question homo sapiens‘ very place in the world. Since then scientists’ knowledge of animal tool use has expanded exponentially.
« Lying
The Roots of Human Aggression »
« BACK TO BLOG