This month marks the 45th anniversary of the first board meeting of the L. S. B. Leakey Foundation for Research Related to Man’s Origins. The date was April 8, 1968 and one of the first orders of business was to procure a $12,000 loan. The board meeting minutes state that this money was to be used to fund a “survey and study of the objectives and procedural methods for raising funds by the Foundation.” This study, presented to the board in October 1968, was most favorable for the success of the Foundation.

Why Archaeology in the Space Age?

Thomas Macaulay, the English historian, essayist and politician once said, “A people which takes no pride in the noble achievements of remote ancestors will never achieve anything worthwhile to be remembered with pride by remote descendants.”

Man is motivated to try to know the unknowable. Discovering his mystery-shrouded past is, today, as much of a challenge as probing his limitless future. Perhaps understanding man’s origins and evolution are even more important and gratifying than charting his future because it provides insight into the present and enables man to face his future with a greater degree of confidence.

Making a case for the L. S. B. Leakey Foundation for Research Related to Man’s Origins during the middle of the space race might have seemed daunting at first. As we were circling the moon, Louis Seymour Bazett Leakey and the founders of the Foundation sought funding for a completely different sort of research here on Earth. The Foundation was originally envisioned simply as a means by which to support the research of Louis Leakey, including garnering monetary support for his lectures. But finally in 1970, after a rather shaky financial start, the Foundation was given a one million dollar challenge gift by Robert Beck. It seemed the founders’ tireless and intelligent work had succeeded; the Foundation was up and running. By the end of 1970 the L. S. B. Leakey Foundation had given away more than $150,000 and was positioned to make a huge impact on the science of human origins.

In early case statement collateral found in archives, the first page contains these words by then-President of the Foundation, Edwin S. Munger:

Man, in seeking answers to his most basic questions about himself and his destiny, faces almost exclusively to the future. Louis Leakey and other distinguished anthropologists ask if man might not be facing the wrong way in his otherwise estimable quest. The mankind that will flourish or fail in 1974 or 2000 or 5000 has been 20 million years in the making.

More than four decades later, The Leakey Foundation has remained true to these ideas. Our name has changed ever so slightly, but our mission statement confirms that our focus on human survival has not diminished, nor has our aim to advance the important work that the Foundation funds.

Today we find ourselves in a different age, the information age, and as you might imagine, some things have changed since those early years. While The Leakey Foundation continues its long history of funding important research, the granting process has evolved. Presently, the Foundation awards more than $600,000 annually in field and laboratory grants. There are two granting cycles per year, each with typically 100 applications or more. This is all handled electronically. Proposals are submitted online and incorporated into our database. Peer reviewers from around the globe utilize the online system to both retrieve proposals and submit reviews. With numerous reviews per applicant, it’s hard to imagine the amount of paperwork this entire process would have required during the formative years of the Foundation. 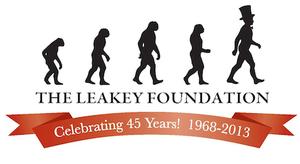 From the space age to the information age, our perspectives have surely changed, but the relevance of The Leakey Foundation has not. In fact one might argue that as we witness an accelerating and expanding dependency on technology, the case for the Foundation is made stronger. As we race toward the future we must keep in mind the importance of understanding our history.

Grants, The Leakey Foundation
The Leakey Foundation is proud to introduce the 31 recipients of our spring 2020 research grants.
« Welcome: John Mitani and Terry Harrison have joined the SEC
Gordon P. Getty: Celebrating 40 Years of Service on the Foundation’s Board of Trustees »
« BACK TO BLOG