We recently introduced you to the new recipients of our Leakey Foundation Research Grants for spring 2016. Over the next few months, we will be featuring short introductions to their work written by the scientists themselves!

First up is Todd Disotell from New York University. He was awarded a Leakey Foundation Research grant for his project entitled “Exome sequencing of the Cercocebus-Mandrillus clade.” 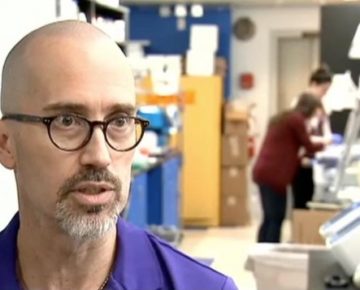 The goal of this project is to explore the evolutionary history of the Drill-Mangabey clade (Cercocebus and Mandrillus) which is expected to be complex with multiple instances of hybridization and reticulation. Specifically, I am looking to see if both genera are monophyletic with respect to each other, that is, are all species within each genus more closely related to each other than to species in the other genus? If not, which species are most closely related to each other, regardless of generic membership? Are there examples of hybrid origin of some of the species and if so, which parts of the genome were contributed by different source species?

These aims will be carried out by sequencing the protein coding and nearby regions of the entire genome of at least twelve individuals representing all of the species (Cercocebus agilis, C. atys, C. torquatus, C. chyrsogaster, C. galeritus, C. sanjei, Mandrillus sphinx, and M. leucophaeus). The samples to be sequenced include two or more individuals from different parts of the range of the three most widely distributed species. Phylogenetic analyses will be carried out on each of over one thousand of the longest sequences aligned in all of the individuals. These independent analyses will then be collectively analyzed to infer the best representation of the evolutionary history of this group.

A better understanding of a closely related group of primates will hopefully shed light on the complexity evolutionary relationships amongst closely related species such as humans and our archaic relatives.