Kathryn Ranhorn was awarded a Leakey Foundation Research Grant during our fall 2015 cycle for her proposal entitled “New approaches to the archaeology of modern human origins.” 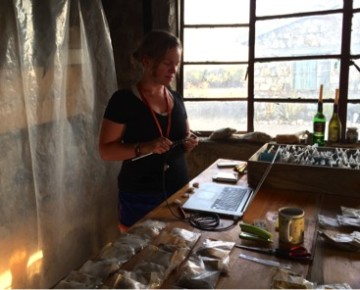 Every human on Earth shares a common maternal ancestor who lived in eastern Africa between 200,000-100,000 years ago. Humans eventually dispersed out of Africa into Eurasia, perhaps multiple times, although the timing and pattern of this is debated. Before dispersing in Eurasia, however, humans inhabited various landscapes across the African continent, from lakeshore environments to high-altitude rock shelters, from the Sahara all the way to the southern cape.

Throughout all of this migration, humans left behind stone tools that they used for different tasks like hunting or woodworking, providing archaeologists with a tangible glimpse into past behavior. If we study Africa from a continental scale during this time period, stone artifacts appeared to be patterned, both spatially and temporally. For example humans in South Africa 60,000 years ago commonly left behind backed blades (the Howiesons Poort), whereas in slightly earlier deposits archaeologists find higher frequencies of bifacial points (the Stillbay). Similar patterns of toolkit differentiation seem to have occurred across Africa, though the exact timing and patterns remain unclear. 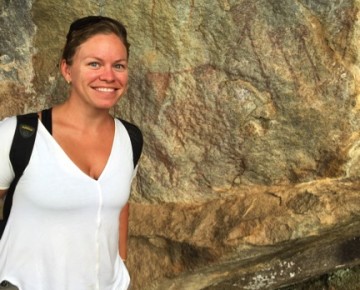 Kathryn at Kolo rock art site, near one of the localities included in her analysis

My dissertation examines how human technology was structured across these different landscapes in eastern Africa, where fossil and genetic evidence suggests humans originated, to determine if these patterns indicate early forms of extended social networks or can better be explained by functional adaptations to varied environments.

I use three-dimensional photogrammetry and geometric morphometrics to quantify differences in stone artifacts. I also flint knap with experts across the eastern United States to learn how the variables I measure change as stone tools are produced. For my Leakey Foundation research, I will be studying archaeological collections in Kenya and Tanzania, from Olduvai Gorge to the Turkana Basin, and applying these new methods.

My research contributes to the growing body of literature that seeks to understand the extent to which early humans shared technology across groups. By testing models of cultural transmission in different landscapes we can better understand how these behaviors are recorded in the time-averaged archaeological record. 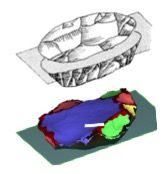 A participant removes a flake in Kathryn’s experiment knapping study.