Iulia Badescu was awarded a Leakey Foundation Research Grant during our spring 2015 cycle for her project entitled “Investigating the infant nutritional development of wild chimpanzees.” She was recently published in the American Journal of Physical Anthropology, and she was kind enough to summarize the article for our Leakey Foundation Blog. 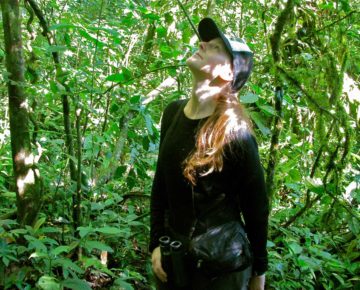 Humans vary considerably in our strategies of infant feeding. For example, the optimal ages at which infants ought to be completely weaned or begin consuming solid foods are regularly questioned by researchers and in the media. To better understand the evolutionary contexts under which our diverse strategies of infant feeding evolved, we can look to nonhuman primates. Understanding the diets and feeding patterns of nonhuman primate infants will help us establish early life history parameters in our hominin ancestors, which can shed light on the diversity of contemporary infant feeding practiced between and within human populations.

In wild primates, it is difficult to precisely measure what infants are eating. A major challenge in quantifying infant diets and in identifying the timing of feeding transitions comes from our inability to know from observations alone whether infants are actually drinking maternal milk when they make nipple contacts, and to distinguish between mouthing and ingesting of vegetation. We assessed observational limitations by using a novel fecal stable isotope approach to physiologically determine the timing of age-related feeding transitions and to measure the relative contributions of maternal milk to adult foods in the diets of wild chimpanzee infants at Ngogo, Kibale National Park, Uganda. 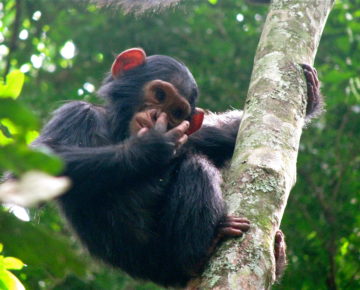 We collected several hundred fecal samples from mothers, juvenile siblings, and infants varying in age from birth to seven years old, as some individuals continued to make nipple contacts up to this age. We dehydrated the fecal samples on site using a solar “poop” dehydrator and stored them on silica, in a freezer, until we took them to the University of Calgary’s Isotope Science Laboratory for analyses. We compared the stable carbon and nitrogen isotope values of mothers and their offspring and attributed major isotopic differences to the maternal milk ingested by infants. Newborns and mothers initially showed very different isotopic profiles that decreased as infants grew older. We could tell when a weanling became nutritionally independent when her stable isotope profile was nearly identical to that of her mother’s.

We reported several key findings of using fecal stable isotopes to track the diets of chimpanzee infants. First, we discovered the presence of comfort nursing in chimpanzees. Most of our older study subjects (between 4 and 7 years old) were weaned individuals that were observed to continue making nipple contacts regularly, presumably for comfort rather than nutrition. Second, we found that the weaning process for chimpanzees at Ngogo started when infants were around 1 year old, after which there was a gradual decrease in reliance on maternal milk. The weaning process was complete when infants were between 4 and 4.5 years old, which is in line with reports of weaning established through observations at other chimpanzee sites. Due to comfort nursing, however, had we relied solely on our observations of nursing behavior, our estimates of the average age at which infants were weaned would have been a few years higher; this suggests that fecal stable isotopes can be used to provide a more accurate and biologically meaningful assessment of weaning. 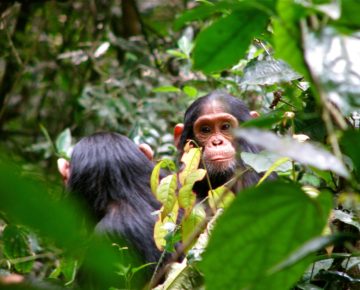 Third, we found that infants may begin ingesting solid foods as early as a couple of months after birth but this estimate was based on few fecal samples, and more data are needed to confirm this finding. Observations of infant feeding confirm this result, as we observed infants at Ngogo likely ingesting bits of solid food as early as 2 to 3 months after birth. If this age at the start of transitional feeding is confirmed in future studies at Ngogo, it would be considerably earlier than reports of infant feeding at other sites. Lastly, fecal stable isotope comparisons showed no overlap in nursing between infants and their juvenile siblings, and this was confirmed through observations.

There is a lot of research that should be done with infant chimpanzees, and we are grateful to the Leakey Foundation and other agencies for funding our work at Ngogo. While the results of this study allowed us to build a more precise model in the age ranges of key feeding transitions in wild chimpanzees, further studies are needed to measure population level averages. We thus plan to continue assessing infant feeding at Ngogo using a stable isotope method. In addition, we will use this method to evaluate differences in maternal investment strategies across mother-offspring pairs, which can allow us to answer questions about fitness and reproductive success. 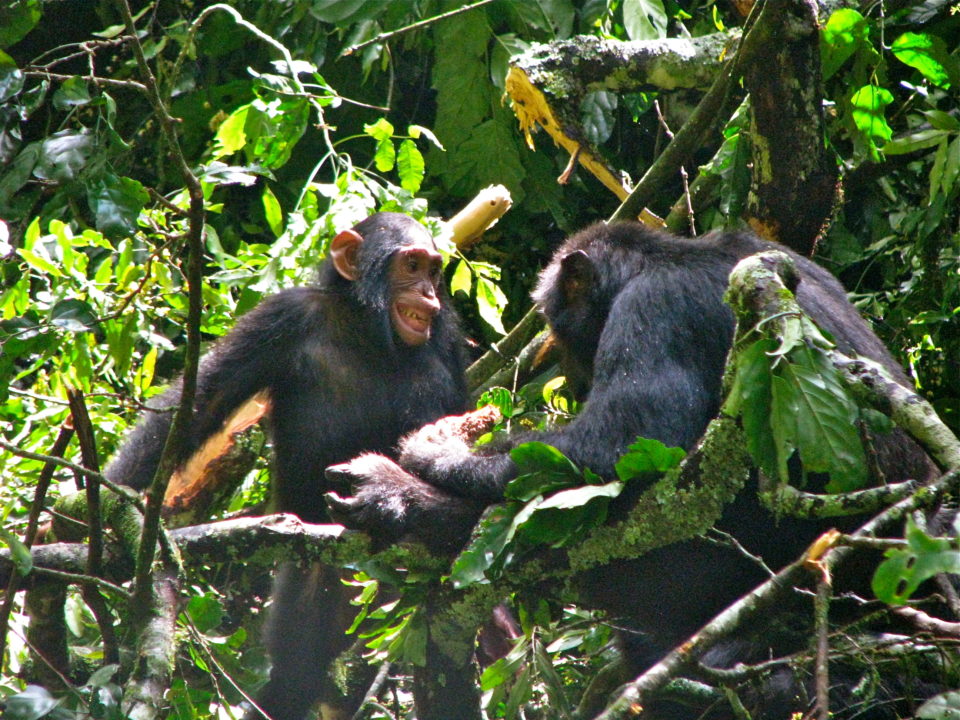 The earliest adornments in the Middle Paleolithic

Journal Article
Ancient humans deliberately collected perforated shells in order to string them together as beads, according to a study supported in part by The Leakey Foundation and published July 8, 2020 in the open-access journal PLOS ONE.
SEE MORE