John Hoffecker of the University of Colorado has been awarded 13 grants from The Leakey Foundation for his research at various sites in Eastern Europe. He has been awarded three for work at Shlyakh, an open-air Paleolithic site located in the Volgograd region of Russia. The most recent Leakey grant for this site was awarded in the spring of 2013.

In August 2013 Hoffecker and his team performed fieldwork at Shlyakh in order to establish a firmer chronology for the main occupation layers, which contain a Levallois blade and point industry.  In the report below, Hoffecker shares the results of this fieldwork and describes how this site may represent a modern human presence on the southern plain of Eastern Europe. Research Report
Nancy Stevens Nancy Stevens is a professor at Ohio University. She was awarded a Leakey Foundation research grant in the spring of 2011 for her project entitled “Oligocene… more » 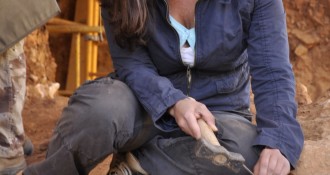 Micro-CT study of the Pleistocene human fossil teeth from Atapuerca