Guest blogger Rebecca O’Neill (see bio below) shares her impressions of our May 23rd installment of Science Speakeasy- Out of This World:  From Caves to Space.

Humans have an uncanny desire to explore the unknown. I think most of us can recall times where we’ve felt that curiosity to see what’s around that next corner or behind that dark door. Some of us follow that urge even further to go where no man (or woman) has been before, which leads them to some extreme situations.

I recently attended the Leakey Foundation’s Science Speakeasy “Out of This World:  From Caves to Space,” where two impressive experts shared their stories from their explorations to uncover truths about science and humanity. 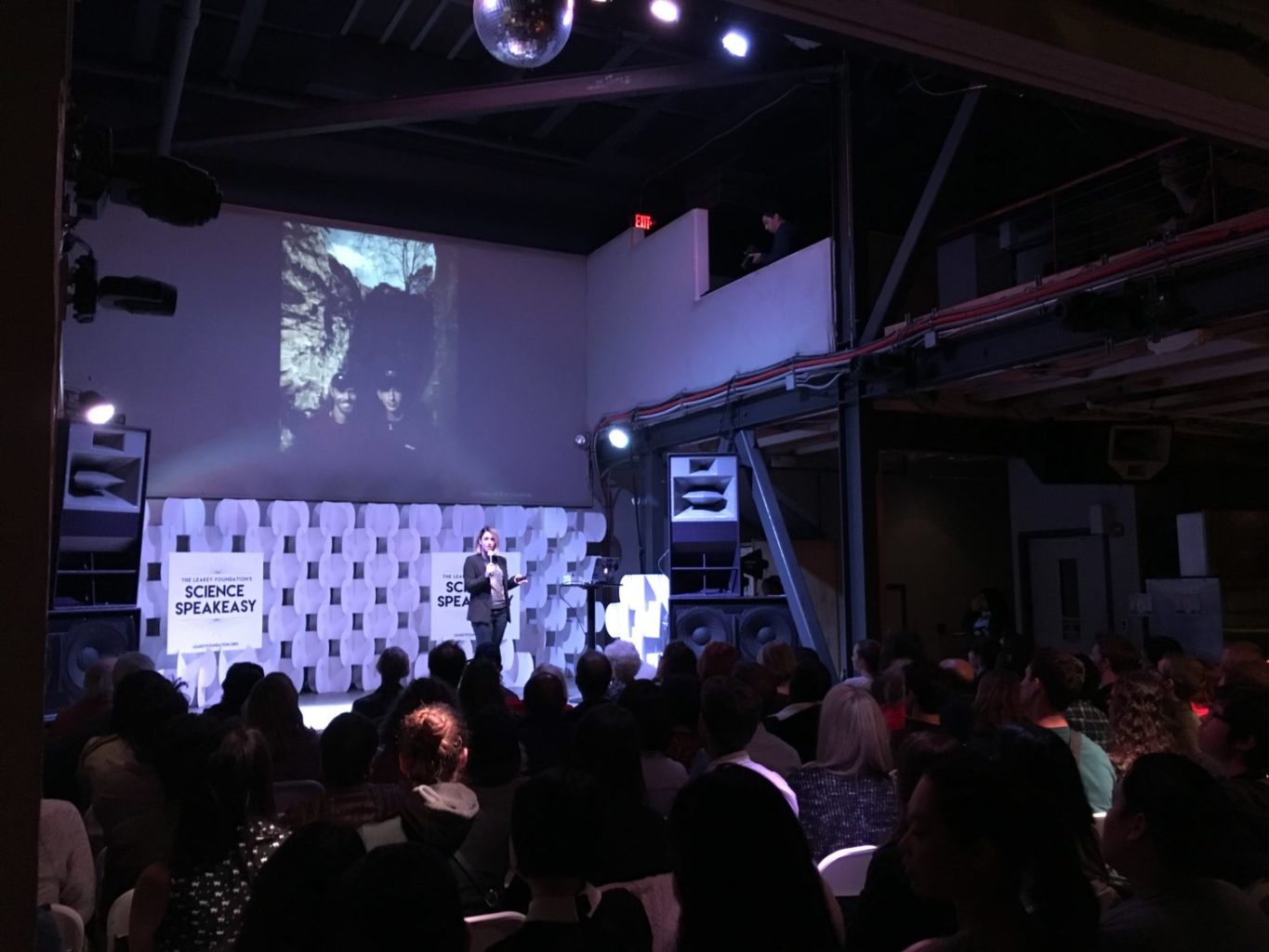 The first speaker, Alia Gurtov, told us about her experience as part of a team of anthropologists who discovered the new species of Hominin Homo naledi. She signed up to the project not knowing quite what she was in for but up for the adventure…

It turned out that the site she would be excavating was deep inside the Rising Star cave in South Africa. It took crawling through “superman’s crawl” (a 10-inch high tunnel), scrambling up the “dragon’s back” (steep ridges with sheer drops on either side) and then dropping down a vertical chute to get to the spot where the bones were buried. Excavating the site not only took patience and delicacy (as all digs do) but also the mental and physical fitness required to work in such an intense location, not least mastery of any claustrophobia.

The hard work paid off and we have Alia and the rest of her team to thank for shedding new light on evolution. Homo naldei is estimated to have existed about 230,000-330,000 years ago. The scientists found 15 specimens (a number that is unheard of in hominin discovery) of a range of ages and both genders, which makes for invaluable information on the new species. It was painstaking work to uncover all the various bones, partly because some of the bones were “mushy, like wood that’s been floating in water.” Alia and the team believe Homo naledi practiced intentional deposition (i.e. the bodies were thrown down the chute as a form of burial), which makes the cave even more enigmatic. 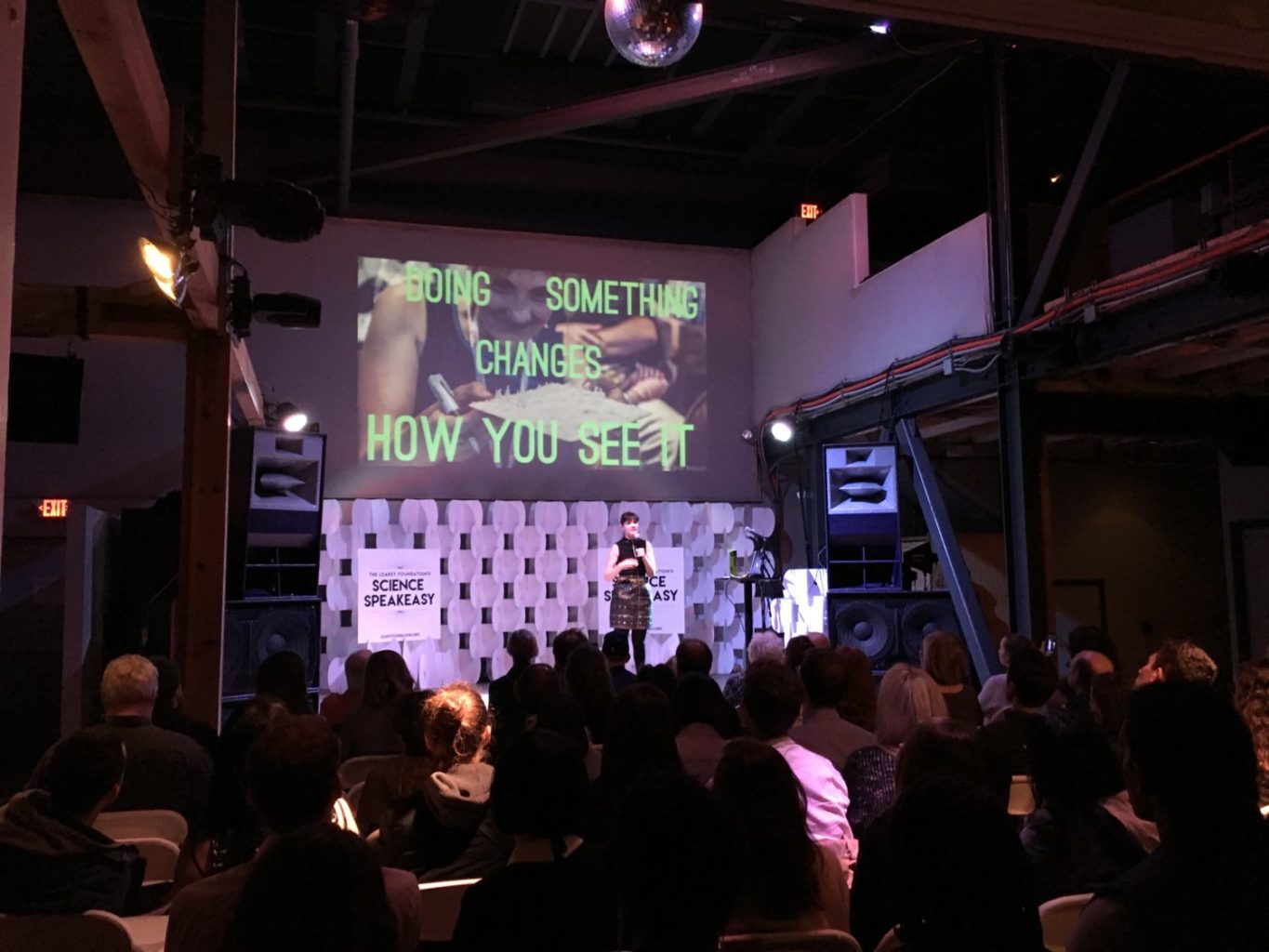 The second speaker of the evening, Ariel Waldman, took us the opposite direction – instead of deep inside the Earth, she flew us out to outer space. As a council member of NASA’s Innovative Advanced Concepts, she is passionate about stretching the realm of possibility when it comes to space.

Humans are applying our large brains that have served us so well in our evolution to learn about what’s beyond our own planet. Ariel pointed out that NASA is actually just a bunch of “space hackers” – they are figuring it out as they go. There are increasingly interdisciplinary efforts going on to better understand supernovas, what life could look like on other planets and many other facets of what space has to offer us.

As I reflected on the essence of what both speakers had shared, I realized that, ultimately, humans have benefited hugely from our desire to explore the unknown. Though the urge may put us in danger in some cases, the risk is often worth it for the reward of new knowledge and skills, which enable us to adapt and evolve. The need to fulfill this desire has enabled humans to advance our societies and shows us how much we still have to learn. Long may we follow our urge to explore – it is one of our defining characteristics and the key to our survival in this complex and mysterious world we live in.

Journal Article, Guest Post
Human beings used to be defined as “the tool-maker” species. But the uniqueness of this description was challenged in the 1960s when Dr. Jane Goodall discovered that chimpanzees will pick and modify grass stems to use to collect termites. Her observations called into question homo sapiens‘ very place in the world. Since then scientists’ knowledge of animal tool use has expanded exponentially.
« Science Speakeasy Showcases the Secrets of Science
It’s not that your teeth are too big: your jaw is too small »
« BACK TO BLOG