From the Field: Julien Louys, Sumatra

Julien Louys was awarded a Leakey Foundation Research Grant in spring 2014 for the project “Palaeontological and archaeological investigations of Pleistocene cave deposits from Sumatra.” 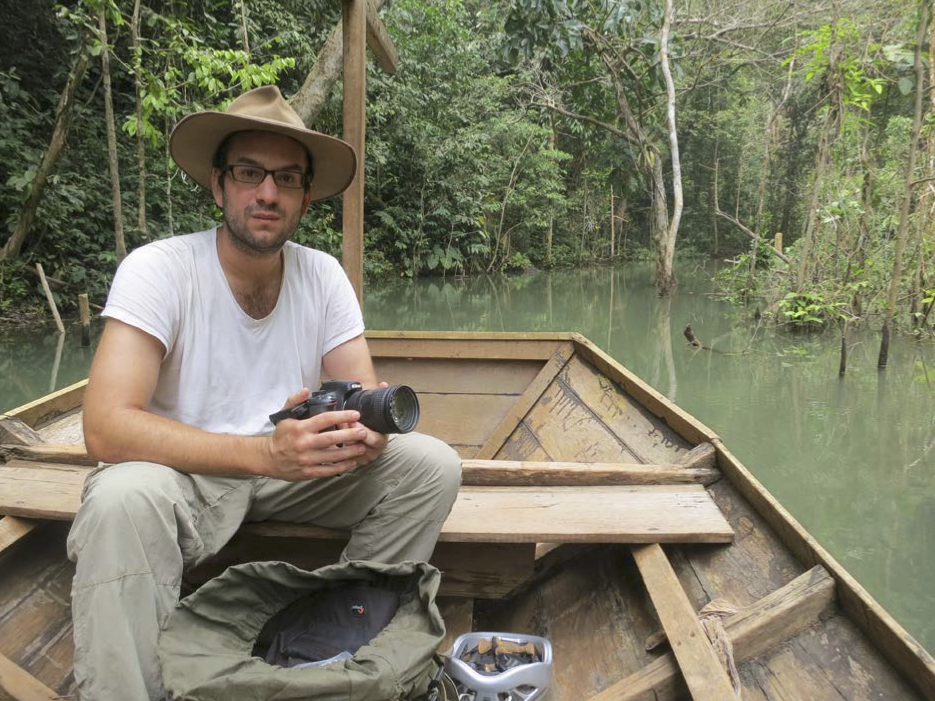 In 1887 M. Eugène Dubois set out to what was then the Dutch East Indies in search of the missing link. His first posting, in Padang, western Sumatra, provided him with access to the numerous caves that honeycomb the limestone hills and mountains in the surrounding highlands. From these caves, Dubois extracted hundreds of fossils—mostly teeth of large mammals—which would continue to be our only snapshot of Sumatra’s Pleistocene past for 150 years. In September 2015, our team arrived in Padang in an effort to retrace Dubois’s footsteps, and to forge new paths, in a quest to unearth Sumatra’s unique biological and environmental evolution over the last 100,000 years.

Our team, initially consisting of Dr. Gilbert Price (University of Queensland), Masters’ student Wahyu Dwijo Santoso (Institute Tecknologi Bandung) and me, and later joined by Dr. Yan Rizal and PhD student Agus Trihascaryo (both also from the Institute Tecknologi Bandung) began our survey from the small town of Batu Sangkar. We had acquired mudmaps of the location of Lida Ajer, Dubois’s most well-known Sumatran site, from Dubois’s fieldnotes and other researchers who had successfully located the cave some years before. Despite these, it still took us two days to finally locate the cave, as it turns out there are several caves in the region named Lida Ajer (literally ‘water tongue’). Having finally located the correct cave, we set about mapping the interior and collecting samples of speleothem and fossils for dating, critical for achieving our project objectives. 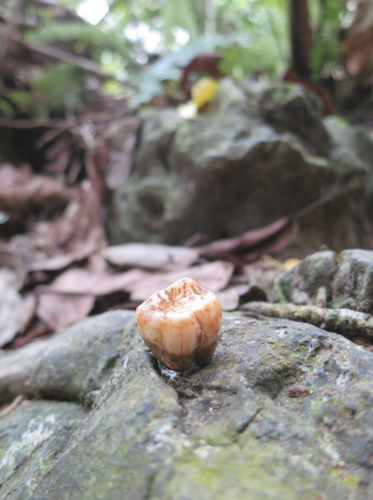 Our project had four main objectives: (1) to relocate the Sumatran Caves described and excavated by Dubois; (2) to establish new sites in Sumatra; (3) to examine the depositional context of fossils in west Sumatran caves and determine their ages and their relationship to the Toba eruption; and (4) to examine the impact of the Toba eruption on the fauna and flora of Sumatra, and in particular the orangutan. The Late Pleistocene (~75,000 years ago) Toba eruption was the largest volcanic event of the Quaternary. Comparisons with historical eruptions, such as Tambora, Krakatau, and Pinatuba do not do justice to the sheer devastation wrought by this event. An estimated 2500-3000 km3 of pyroclastic ejecta was released from the volcano, and it is estimated that tuff from the eruption covered at least one percent of the globe. Understanding the impact of this eruption on ecosystems, particularly in Sumatra, was our primary reason for seeking these caves and the fossils they contained.

Once we had completed sampling Lida Ajer, we spent the next three weeks visiting a range of caves in the area; all in an effort to find new sites and relocate two of Dubois’s other sites. Unfortunately, unlike Lida Ajer, there is no good locality information available for the sites of Sibrambang and Djamboe, so we worked systematically from village to village, asking local inhabitants for information about caves in the area. 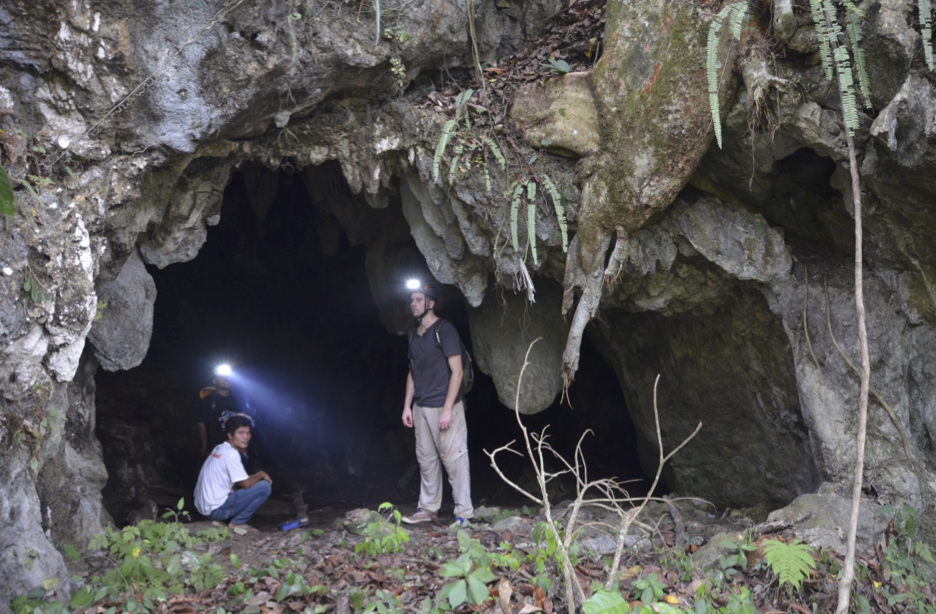 We then explored each cave, looking for the characteristic fossil-bearing breccia, which are often in the smallest nooks and crannies of cave passages. Despite our best efforts, we find neither Dubois site. We do, however, identify at least three new deposits of fossils in three different caves. Like Lida Ajer, we collect suitable samples to date the deposits where possible. These will be invaluable for reconstructing the history of faunal and environmental change in the region. Most deposits we identify are rich in orangutan teeth, indicating that these species were common on the landscape in the past – they are now sadly extinct from Padang; and in Sumatra today are only found around the Toba crater.

Analysis of the dating samples and the fossils we recovered is ongoing in the labs. We hope they will record periods from before and after the Toba eruption, thus allowing us to examine whether or not this event had a major effect on the hominid faunas of Sumatra. 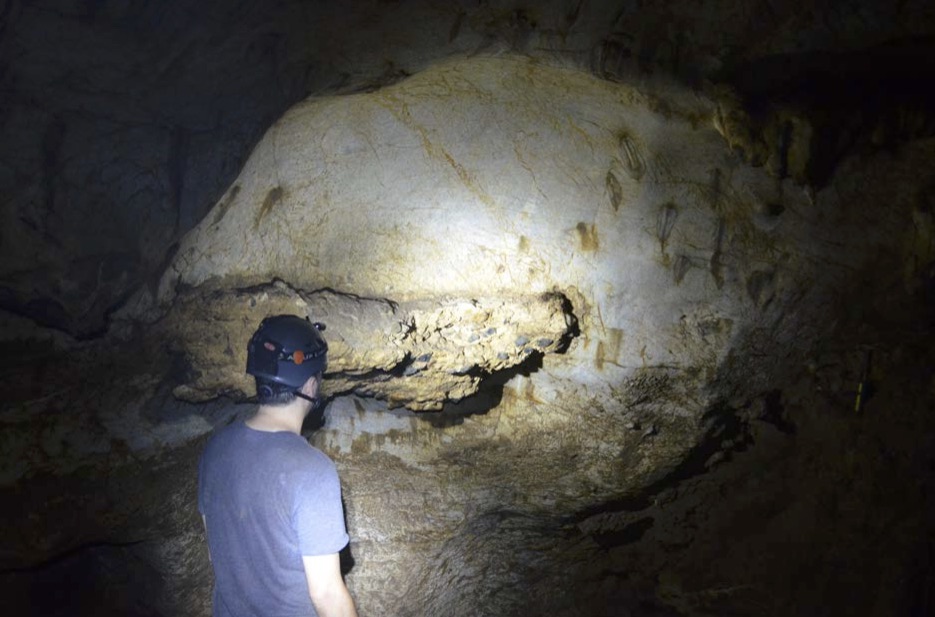 Dr Gilbert Price examining a breccia deposit in one of the Sumatran caves.

From the Field
Leakey Foundation grantee Shannon Mc Farlin sends an update from the Bwindi Impenetrable National Park in Uganda where she has been cataloging the skeletal remains of mountain gorillas.
« From the Field: Jason Lewis
From the Field: Marie-Hélène Moncel, Italy »
« BACK TO BLOG