From the Field: Alia Gurtov 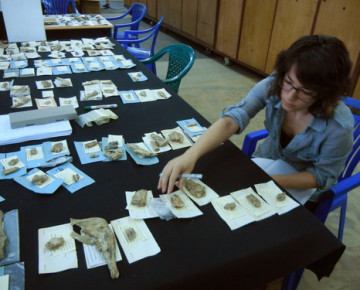 Here we have another update from fall 2014 grantee Aliz Gurtov. To read a summary of her work, please click here, and to read her first update from the field, click here.

With the start of 2016, it is time for a progress update. As I write, I am sitting in a pleasantly overheated café while Madison, WI, withers in 5° F temperatures. This couldn’t feel more different from the conditions in which I first wrote about my research.

This disconnect is not simply climatic. As I’ve been told by many wise academics, the research road is bumpy. I left off the previous update with great excitement to scan my dental casts in Nashville, TN, in August 2015. When I finally placed my first cast under the confocal microscope, however, I could see that something was wrong. There were microscopic bubbles in the surface that I could not account for by any natural process. I rapidly scanned a dozen teeth, finding only a few casts of sufficient quality. What a disaster. I continued to scan teeth for the next few days, confirming that a good portion of my sample had some kind of molding or casting error that was not present in the casts I’d analyzed back in February, or those I’d analyzed for my pilot study.

Upon returning to Madison, I set about recasting my molds using several different curing methods and epoxy component ratios. I called several epoxy manufacturing companies, dental microwear experts, and students with extensive casting experience, but gained little insight into the source of my particular bubbly blight. Because all of the original teeth are housed in the National Museum of Tanzania, I was unable to try remolding them, though this is the next logical step. I then sent a sample of re-casted teeth to my collaborator, Professor DeSantis at Vanderbilt University, to check before I scheduled another week with the confocal. But after two weeks it became apparent that while the parcel was recorded as delivered, it had never reached the department office. With no alternative, and only one week when the confocal would be available, I booked another flight to Nashville.

And once again, most of my casts were unusable. I don’t think my heart has ever plunged so rapidly into my stomach before. Nevertheless, I stuck with the microscopy for the next few days and managed to find a sufficient number of usable teeth from which to draw pristine microwear surfaces. I am still devastated by the number of worthless casts in my sample, but I have learned to compartmentalize!

Now, while I drink this cappuccino, I am looking at a modest but sufficiently populated spreadsheet of dental microwear analyses from such extinct bovid species as Parmularius altidens and Antidorcas recki. Being the most abundant bovids at my primary sites of FLK North and FLK Zinj, I am grateful to have them. As my pilot study suggests, some of these microwear variables distinguish between wet and dry season deaths and, by extension, seasons of hominin and carnivore meat-foraging activity. By comparing the bovid microwear values between anthropogenic FLK Zinj and carnivore-generated FLK North, I will be able to determine if hominins were meat-foraging during seasons of peak or low carnivore activity around watering holes, or employing no seasonal meat-foraging strategy at all. Thus far, there appears to be almost perfect overlap in the foraging season of Antidorcas recki, a small gazelle about the size of a modern Thomson’s and likely prey of ancient leopards. I now turn to Parmularius altidens to see what this larger bovid says about hominin foraging seasonality at Olduvai Gorge.

To hear about my final results, please join me for my podium session on Saturday afternoon, April 16th, at the AAPA meetings in Atlanta.

We look forward to seeing Alia at AAPA, and we hope to report on her findings!

From the Field
Leakey Foundation grantee Shannon Mc Farlin sends an update from the Bwindi Impenetrable National Park in Uganda where she has been cataloging the skeletal remains of mountain gorillas.
« From the Field: Alexandra Uhl
From the Field: Timothy Campbell »
« BACK TO BLOG