By Sharal Camisa, Executive Director of The Leakey Foundation

When I stood in the dimly lit overhang at Abri de Cap Blanc in the Dordogne region of France and my eyes beheld the carved horse in sandstone (15,000ya) I was reminded that the capabilities to imagine and create lie deep in our species’ DNA.

The Dordogne region of France is famous the world-over for housing some of the most spectacular and earliest evidence of creativity. For a few weeks in May 2016, a group of nineteen Leakey Foundation Trustees and Fellows visited many of these sites and met the people studying this area of prehistory. Following our visit to France, a group of eight intrepid travelers continued on to Leipzig, Germany, for an in-depth look at the research being conducted at the Max Planck Institute for Evolutionary Anthropology, with excursions to an archeological site, a museum, and a zoo, with cultural activities too. 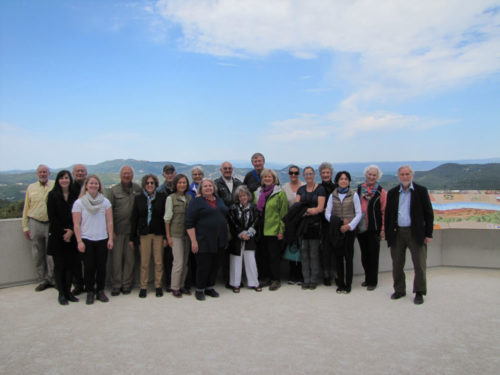 One of the most thrilling aspects of both tours was the time spent with the experts whose life work provides insight and evidence about our earliest ancestors. The roster of bright minds is too long to list, but a few provided a generous amount of time and energy to give our group a truly memorable experience. Rock art specialist Jean Clottes, archaeologist Harold Dibble, and paleoanthropologist Jean-Jacques Hublin hosted us throughout our tours of France and Germany. They provided behind the scenes access as well as new (often unpublished) information about their research.

At Rouffignac Cave, Font-de-Gaume, Abri du Cap Blanc, Cougnac Cave and Pech-Merle, we were encouraged to think about those who would have made their way into these seemingly magical spaces. From the astonishing amount of mammoths depicted at Rouffignac (158 or 70% of all animals represented) to the various schematic human figures at Cougnac, almost identical to ones found at Pech Merle. In some examples from Font-de-Gaume, the paleolithic artists only needed to draw two or three lines to connect natural forms and turn them into animals; a frieze depicting bison reflects remarkable artistic skill. At Pech Merle there are footprints preserved in the ground, and on the “Spotted Horse Panel” (29,000ya) a horse practically gallops off the side of a cave wall. Its head is perfectly made from the shape of the jagged rock. 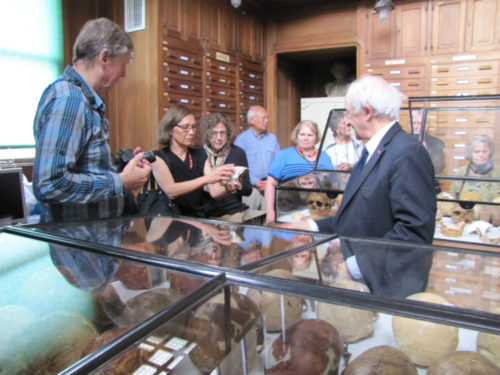 Museums provided opportunities to see priceless collections up close and to ask curators questions. The group visited l’Institut de Paléontologie Humaine with Professor Henry de Lumley and spent time in the laboratories of the newly re-opened (2015) Musée de l’Homme in Paris. There was a private visit (the museum was closed) at the Musée National de Préhistoire in Les Eyzies-de-Tayac where we saw the bones of the Neanderthal child discovered in 1961 at Roc de Marsal, as well as the artistic reconstruction of that child by paleo-artist Élisabeth Daynès. (That exhibit would bring us full circle since we also visited Daynès’ art studio in Paris and the archaeological site of Roc de Marsal with lead investigator Harold Dibble.)

In Halle, Germany, we joined Dr. Jean Jacques-Hublin for a tour of the incomparable Halle State Museum of Prehistory. Such unique, artistically refined exhibits provoked awe as we gazed at the Nebra Sky Disc, contemplated the ritualistic burial of an infant with its puppy and a hoofless horse (extraordinary), and stepped backward as a life-sized elephant burst thru a wall. Creativity was not only to be found on dark cave walls and in museum exhibits but also in the remarkable atelier of Ms. Daynès, where we saw the painstaking work of adding hairs, one by one, onto a reconstruction of a hominid. Then there was also the engineered and artistic reconstructions of Lascaux and Chauvet.

Across the border in Germany, the Wolfgang Köhler Primate Research Center at the Leipzig Zoo and the Schöningen site were two excursions that demonstrated the breadth of research funded by The Leakey Foundation. The primate research center focuses on the behavior and cognition of the four great apes, while the Schöningen site provides evidence of the earliest specialized tool kit, including wooden spears, 300,000 years old. 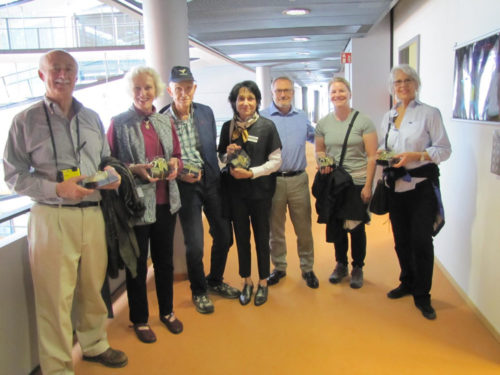 A day was spent at the Max Planck Institute for Evolutionary Anthropology in Leipzig where researchers investigate humankind’s history from an interdisciplinary perspective. They are testing their hypotheses with imaginative, cutting edge projects, many funded by The Leakey Foundation, including 35 grants totaling almost half a million dollars, mostly in small seed grants to young scientists. At the MPI, we met an early career scholar and Leakey Foundation grantee Kathryn Fitzsimmons, who took us into her pitch-dark lab to teach us about luminescence dating. Director Svante Pääbo spoke to our small group about the tantalizing possibility that Neanderthals had language, and he is using genetic evidence to test his idea. In the Department of Human Evolution, Jean-Jacques Hublin has assembled a diverse group of thought leaders, including 32 people who joined our group for lunch to break bread and talk about human origins. This was a captivating experience for paleoenthusiasts like those traveling with The Leakey Foundation.

While strolling through the museum in Halle, I asked Jean- Jacques Hublin why he has dedicated his life to studying our earliest ancestors. He paused and then said in almost a whisper, “It connects us with people we have forgotten. It resuscitates those people. It is a fight against oblivion.” A truly eloquent and creative way indeed to explain why human origins research matters.