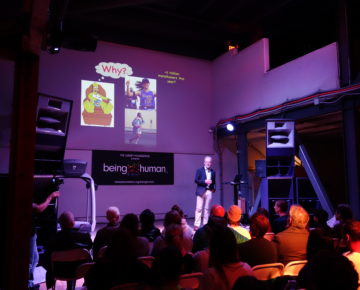 Guest blogger Rebecca O’Neill (see bio below) shares her impressions of our July 28th installment of Being Human.

Running. Some people love it, getting in the zone and enjoying that “runner’s high.” Some people tolerate it as a necessary way to stay fit. Others, and I admit I’m in this camp, can’t see the appeal, unless they’re being chased by some terrifying beast or a swarm of bees….

However, there is no doubt that running is part of being human and has served us extremely well over the course of our evolution. I recently attended a Being Human lecture where Daniel Lieberman, professor of human evolutionary biology at Harvard University, explained why that was.

He started with the reason why running was so beneficial to us. Essentially, humans were able to hunt large prey (such as antelope) by outrunning them. It’s hard to believe, I know, but here’s how it works:  A human would start to chase an individual animal and track it when it sprints away. It would keep chasing the animal to the point where the animal would overheat. This is where humans’ ability to sweat is a huge advantage – we can cool ourselves while running. It gets to the point where the animal is dying of heat exhaustion, and the human can kill it simply by using a rock.

In fact, the human body has a whole host of traits, in addition to sweating, that enable us to run so well:  large gluteus (butt) muscles, long legs, short toes, lack of fur, our Achilles tendon (which gives our legs some of their spring) and many more. 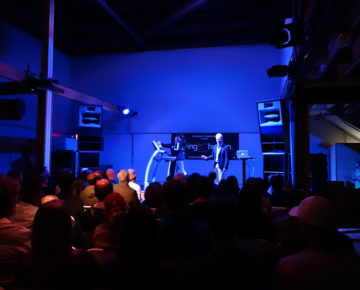 But it turns out that, despite all those beneficial physical attributes, many of us run inefficiently, which can cause injuries. During the event, Dan had two volunteers run on a treadmill on the stage to demonstrate the four criteria of efficient (and less painful) running:

So why do we run in today’s world? Most of us can buy our food – we don’t need to run down our prey. We certainly don’t need to escape predators. Why do we feel compelled to run such long distances? I wondered this as I watched my husband train for and complete his first half marathon. Bleeding nipples (yes, it’s true), aching muscles, shin splints, sore knees… what is the point, I wondered?

Part of it is the social connectivity. Dan pointed out that hundreds of millions of dollars are raised for charity through sponsorship for races globally. (The Leakey Foundation even had a team running the SF Marathon in July, raising thousands of dollars for field school scholarships!) His theory for why humans often train together in a group (or at least with a buddy), and why we have generated this phenomenon of giving back to the community, is that running evolved as an inherently social activity. Hunting was necessary for the whole community – pregnant and breastfeeding women and children needed feeding. We had to hunt together to be able to bring all the meat back home. I do admit, race days have a certain infectious positive energy and sense of connectivity with perfect strangers.

Another reason is the challenge – competing with yourself or others. (Dan said that a significant percentage of new race runners start because of a bet.) Part of it is that runner’s high (better than anything you can smoke, Dan attests). And of course, a huge part of it is the impressive health benefits. (Apparently runners live 20% longer than those who don’t exercise.)

Humans really are well crafted running machines – it’s a skill we should all be grateful for, regardless of whether we choose to run or watch from the sidelines. 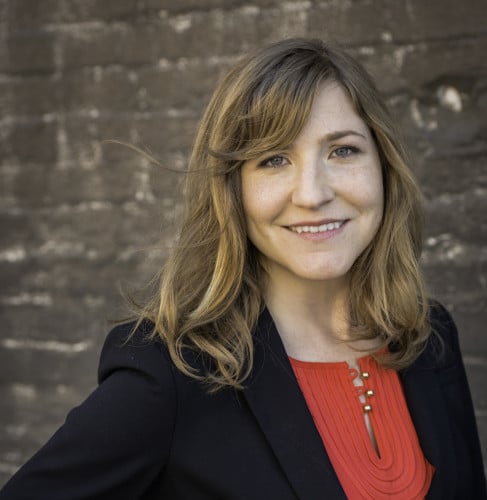 I am a lifelong learner who is a passionate advocate for science and the human capacity for innovation. I have a bachelor’s degree in biology from Oxford University and a master’s degree in environmental science from Imperial College London. I have worked in a variety of nonprofit, media and business roles to promote environmental conservation. I currently live in Oakland, California, and work at SustainAbility, a hybrid think tank and strategic advisory firm working to catalyze business leadership on sustainability.

Charles Darwin has been a hero of mine for as long as I can remember. Evolution is one of the most important scientific theories that humans have discovered. I believe that The Leakey Foundation’s mission is a crucial one – we need to understand how we have evolved in order to make better decisions for ourselves, our society and our planet, both now and in the future.

Journal Article, Guest Post
Human beings used to be defined as “the tool-maker” species. But the uniqueness of this description was challenged in the 1960s when Dr. Jane Goodall discovered that chimpanzees will pick and modify grass stems to use to collect termites. Her observations called into question homo sapiens‘ very place in the world. Since then scientists’ knowledge of animal tool use has expanded exponentially.
« The Evolutionary Benefits of Cooperation
New Videos Just Released! »
« BACK TO BLOG