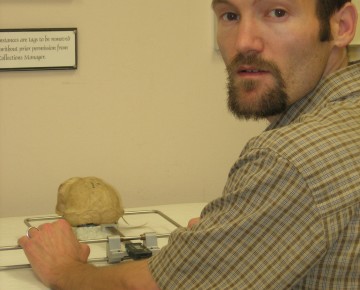 Timothy Weaver was awarded a Leakey Foundation Research Grant in the spring of 2010 for his project entitled “Cranial evolution: Neandertals and modern humans compared to chimpanzees.”

Explaining the meaning of skeletal differences between neanderthals and modern humans has been a topic of debate since the discovery of neanderthals in 1856. Differences in cranial morphology have garnered particular attention. As evidence has accumulated for the importance of neutral evolution (natural selection not acting at all) in creating such differences, scientists have focused on genetic drift and mutation as agents of evolutionary change, but how different in their cranial development are neanderthals and modern humans from other taxa, including chimpanzees, our closest living relatives?

In their research Weaver and his team are comparing patterns of cranial divergence between western subspecies and other subspecies of common chimpanzees with patterns of cranial divergence between neanderthals and modern humans. Because existing datasets were inadequate for making rigorous comparisons, Weaver and his team requested funds from The Leakey Foundation to collect 27 cranial measurements on 263 chimpanzee crania in order to augment the existing dataset of cranial measurements from present-day humans and neanderthals with chimpanzee data.

Two papers have been published so far as a result of this research. You will find links to them below.

“Brief Communication: Quantitative- and Molecular- Genetic Differentiation in Humans and Chimpanzees:  Implications for the Evolutionary Processes Underlying Cranial Diversification” in the American Journal of Physical Anthropology

Journal Article
Teach a chimpanzee to fish for insects to eat, and you feed her for a lifetime. Teach her a better way to use tools in gathering prey, and you may change the course of evolution.
« Validation of an Acoustic Location System to Monitor Bornean Orangutan Long Calls
Group structure predicts variation in proximity relationships between male–female and male–infant pairs of mountain gorillas »
« BACK TO BLOG