From the Field: Dorothée Drucker

Dorothée Drucker was awarded a Leakey Foundation Research Grant during our fall 2015 cycle for her project entitled “Isotopes, diet and human adaptation in a Mediterranean context.” She was kind enough to send us an update from the field. (Click here to read the summary of her work she provided for our blog earlier this year).

My work takes place in the lab where bone samples are prepared for isotopic analysis. To reconstruct diet, carbon-13 and nitrogen-15 are measured to establish the origin of the dietary proteins. Collagen, the main protein in bone, is extracted from the bone sample after several steps of cleaning and purification. 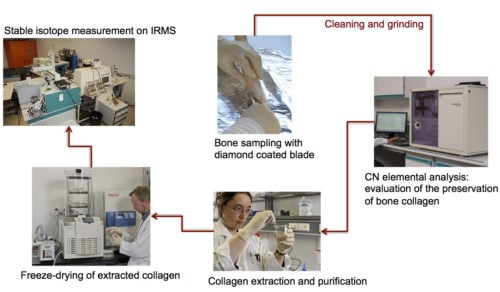 A first set of isotopic results was ready in time for a presentation at the 2nd International Conference on World of Gravettian Hunter that took place in Krakow in May 2016. This meeting was the perfect opportunity to receive feedback about my interpretation of the human diet of the individual from the Serinyà caves. The radiocarbon dates place them at the end of the Gravettian period, a pan-European culture for which most of the human remains are from the Great Central Plains of Europe. Thus, the Serinyà individuals are among the few human specimens in Western Europe found shortly before the Last Glacial Maximum, a period during which the human populations were restricted to smaller territories. 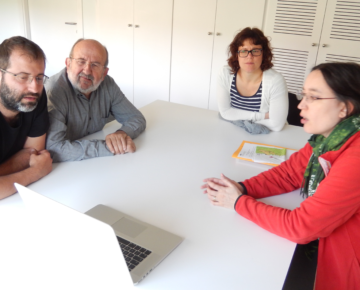 Meeting at the Archeology Museum of Banyoles. D. Drucker presenting the first results and dietary reconstruction to the archaeologists Joachim Soler, Narcís Soler and the curator Andrea Ferrer (from left to right)

After the conference in Krakow, it was time to go back to Banyoles and discuss this exciting new data with my Spanish colleagues. We were especially enthusiastic about the possibility that we are dealing with four different individuals with a wide spectrum of sources of dietary protein. While horse appears as a relatively limited source of meat for all of them, rabbit contributes up to half of the dietary protein for one individual. After having excavated huge quantities of tiny rabbit bones, my colleagues were delighted to hear that it was indeed so meaningful for the subsistence of prehistoric humans in the region. They reminded me that there is no such prey in southwestern France where larger herbivores, such as mammoth, were present and probably exploited for meat based on my former studies. 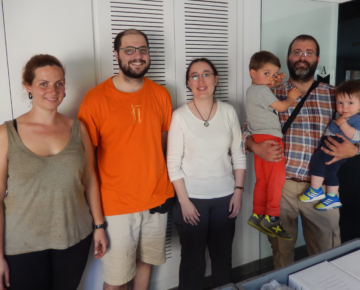 Meeting with a part of the field team: Neus Coromina, Isaac Rufí, Dorothée Drucker, Joaquim Soler with sons Lluc and Mer Soler (from left to right)

We organized sampling of more animal remains from the Gravettian period of the third and last site of the Arbreda cave. The sampling was also directed at faunal and human remains of the Solutrean occupation of the Arbreda and Reclau Viver caves. Additional direct radiocarbon dates are planned to verify the chronological context, especially of the human remains, since the sites revealed also markers of occupation during the more recent Neolithic period. I am looking forward to obtaining the results that should help me to decipher how the harsher climatic conditions of the Solutrean, coincidal with the Last Glacial Maximum, impacted the ecology of humans and their prey.

Back in Tübingen, I shipped a sub-set of the already prepared collagen to my colleague Yuichi Naito at the JAMSTEC in Japan. He will perform the nitrogen-15 analyses on amino acids to fine tune the possible contribution of plants and confirm the lack of aquatic resources in the human diet.

With the complementary results on the Gravettian, I could finish the preparation of a poster to be presented at the 6th Annual Meeting of the European Society for the study of Human Evolution (ESHE) at Alcalá de Henares near Madrid in September 2016. During the conference discussion, it became clear that the impressive development in mass spectrometry of proteins should allow us to explore further the evolution of collagen composition over human evolution. I am exited about more perspectives of collaboration to increase our knowledge of prehistoric people in the Mediterranean context! 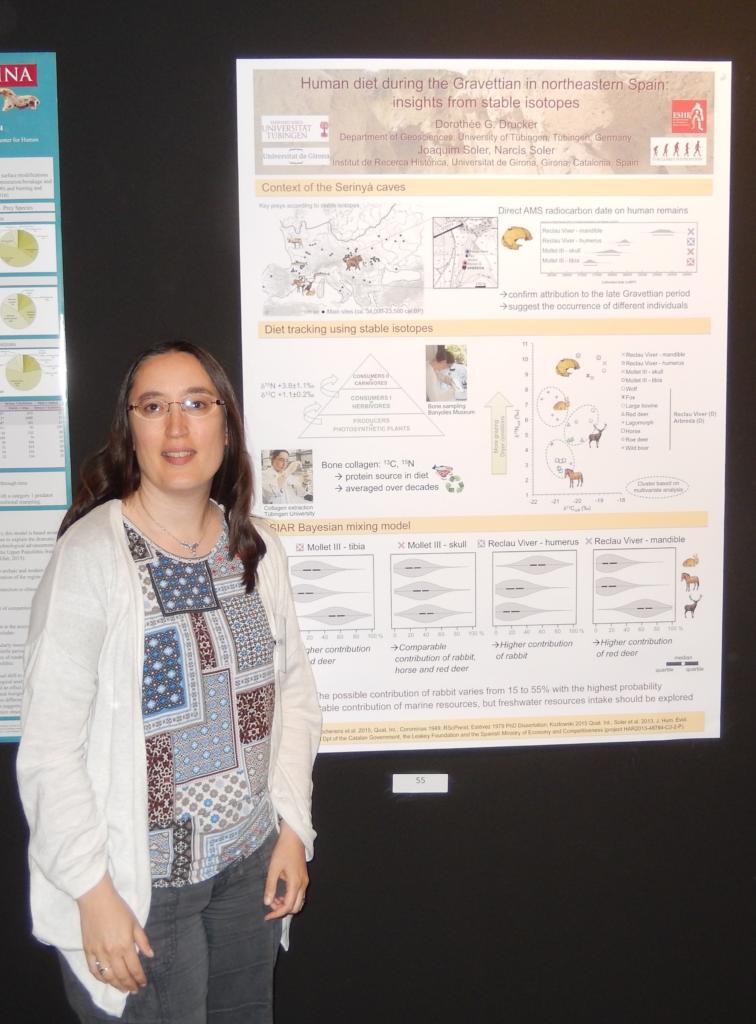 From the Field
Leakey Foundation grantee Shannon Mc Farlin sends an update from the Bwindi Impenetrable National Park in Uganda where she has been cataloging the skeletal remains of mountain gorillas.
« From the Field: Ekwoge Abwe, Cameroon
From the Field: Laurence Dumouchel »
« BACK TO BLOG