Anne E. Russon and her team have been collecting field data on east Bornean orangutans (Pongo pygmaeus morio) at the newly established Bendili study area (northern border of Kutai National Park) since January 2010. Russon has been awarded two grants by The Leakey Foundation for her study of the ranging behavior and diet of this population, which due to the harsh environment is considered to be the extreme of orangutan adaptation. 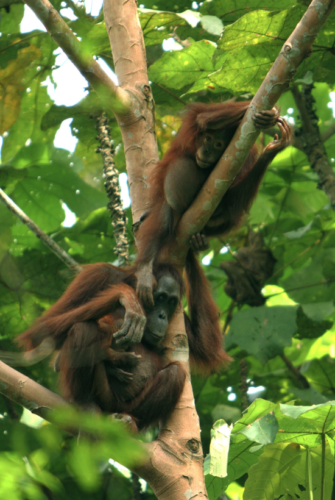 ‘Our’ adult female in our Kutai National Park study area.  Photo shows her (Putri) with juvenile son (Pur) and new infant (no name yet, ca 1-2 mo old, against her belly hidden under her right hand).  Looks like Pur is trying to touch the baby. Mom’s hand gently stops him. – Anne E. Russon

From the Field
Leakey Foundation grantee Shannon Mc Farlin sends an update from the Bwindi Impenetrable National Park in Uganda where she has been cataloging the skeletal remains of mountain gorillas.
« From the Field: Alexandra Uhl at the StEvE Conference, University of Tübingen
From the Field: E.A. Quinn, Nubri, Nepal »
« BACK TO BLOG