A visit with Leakey Grantees at Cambridge 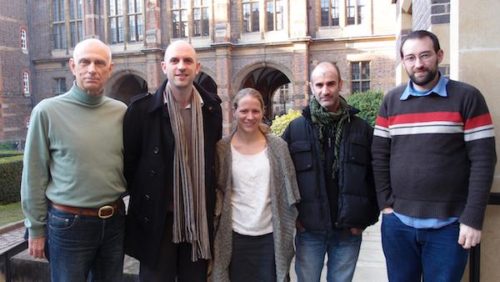 The first Leakey Foundation Cambridge grant was awarded in 1978 to David Chivers, for research at the Malaysian Montane Forests on Pig-Tailed Macaques. Chivers was an early career scientist, having completed his PhD in 1972. Today, he is a Fellow of multiple prestigious societies, serves on several editorial boards, and has published over 100 papers.

The Leakey Foundation has a proud tradition of funding early career scientists, as demonstrated by the “seed money” given to Chivers. Many of these young grantees go on to become the leaders in their field of research, including Cambridge University’s Emeritus Professor of Evolutionary Primatology, Dr. William McGrew. In 1975 McGrew received his first professional grant from The Leakey Foundation for his research on the behavior and ecology of wild chimpanzees in Senegal. Today, Dr. McGrew is a world renowned leader in primate studies. He continues to be involved with The Leakey Foundation through his role as a peer-reviewer for the Foundation’s grant application process. He is advisor and mentor to countless students, including Drs. Stewart and Bertolani, both postdoctoral researchers from Cambridge and recent recipients of Foundation grants.

While visiting the university, Ms. Camisa brought together Drs. Bertolani, McGrew, Nigst, Stewart and Mr. Buckley for an afternoon meeting. For Camisa, “it was an opportunity to meet with a pioneer and the next generation of researchers”. Camisa also observed how “wonderful [it was] to see Dr. McGrew chatting with Mr. Buckley; mentor and protégé sharing tales of life in the field, their hypotheses on primate behavior, and the role with which the Foundation has played in both careers. One cannot meet a Leakey Foundation grantee without truly understanding the impact the grant has made in their pursuit of discovery.”

Dr. Paco Bertolani’s story is an example of how the Foundation can play an important role in field studies. Bertolani had already spent countless hours studying primates at sites in Ecuador, Senegal, and Cote D’Ivoire. But it was his interest in a group of wild Bonobos that lead him to apply to The Leakey Foundation for a grant in 2011. He was awarded the funds to conduct a survey of bonobos in Tshuapa-Lomami-Lualaba area in the Democratic Republic of Congo. It is the Foundation’s hope that this pilot study will flourish into a long-term study site to investigate an endangered primate; just as the field studies of Bertolani’s fellow Cambridge alumni, Drs. Jane Goodall and Dian Fossey have flourished into multi-decade research sites.

The Foundation’s namesake, Louis Leakey began his university career in 1922 at St. John’s College, Cambridge University, but a rugby injury caused him to postpone his studies. During this time and he left the university to help manage a paleontological expedition to Africa. He returned to Cambridge in 1925, resumed his formal studies, and by 1926 had graduated with degrees in both archaeology and anthropology. It was also at Cambridge where he met Mary Douglas Nicol, and in 1933 they would marry.

Donated by Leakey, collections of stone tools and artifacts, unpublished field reports, personal correspondence and official records are held at the St. John’s College Archives and at the Museum of Archaeology and Anthropology in Cambridge. One such archived item is the St. John’s College Referees’ report on Louis Leakey’s Fellowship dissertation. The head of the anthropology department, Alfred Cort Haddon wrote a glowing report describing Leakey as an “efficient field geologist, a well-trained archeologist, well able to tackle a problem in technology, and, unexpectedly, he has shown that he is a competent craniologist.”

The Leakey Foundation’s ties to Cambridge University are strong, what started with Louis Leakey’s studies has continued and grown into an ongoing relationship with the institution and it’s scholars. The most recent grant awarded to to a Cambridge scholar went to Dr. Philip Nigst in 2012. Camisa said of her visit “When one walks the grounds of Cambridge University, you are surrounded by the legacy of great scientific minds: from the education of Charles Darwin, to Crick and Watson announcing they had “discovered the secret of life” with their proposal for the structure of DNA, one wonders the legacy which will be created by the 25 Leakey Foundation grantees from Cambridge. It’s exciting to imagine!”

Grantee Spotlight
Hailay Reda is a two-time Leakey Foundation Baldwin Fellow from Ethiopia. He is a PhD candidate at the University of Oregon. He has also been awarded a Leakey Foundation research grant for his project entitled "Reconstructing the paleoecology of Woranso-Mille hominins using cercopithecids."
« In Memoriam: Phillip V. Tobias
Mothering: The Natural Heritage from Deep Time by Dr. Robert Martin »
« BACK TO BLOG