From the Field: Marie-Hélène Moncel, Italy

Marie-Hélène Moncel was awarded a Leakey Foundation research grant during our spring 2016 cycle for her project entitled “Early evidence of Acheulean bifacial technology in Europe. New fieldwork at Notarchirico (Italy).” 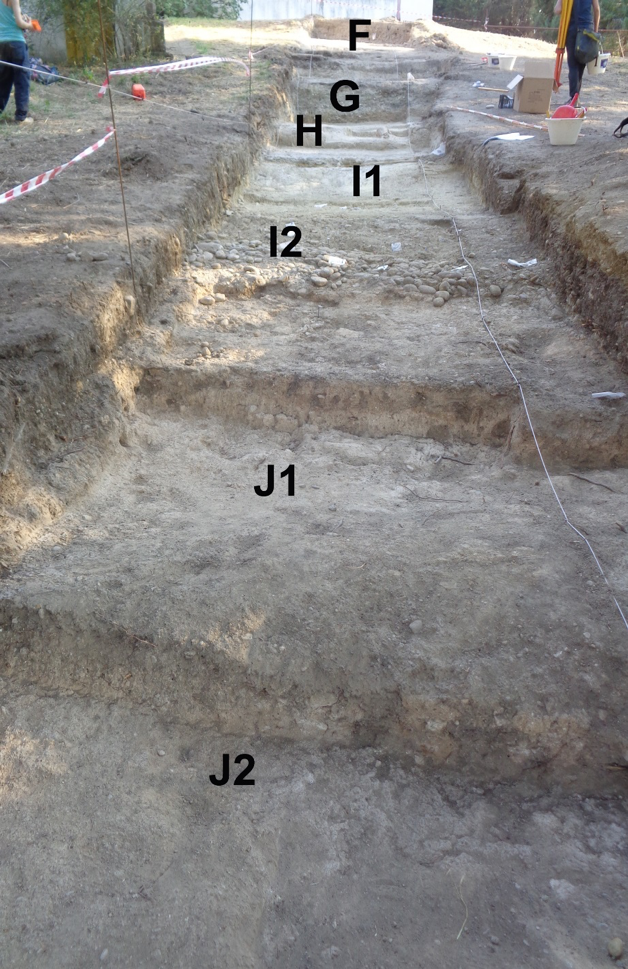 The trench and whole sequence

The main goal of this project is to focus on the technological and subsistence behaviors of hominids at 700-650 ka (700,000-650,000 years ago) in Southern Europe in their environmental contexts, and to compare them to behaviors in the north of Europe, where occupations are considered to be episodic before 500 ka due to climatic constraints. The climatic data from Southern Europe attest to mild conditions, and more continuous occupations are observed, which may possibly be explained in some areas by the presence of rich volcanic territories.

The site of Notarchirico is in the region of Venosa in the Basilicata in southern Italy. This site presents an exceptional complex of sedimentary-volcanic deposits with several very well-conserved human occupation levels. Most of the deposits of the site are linked to the activity of the Monte Vulture stratovolcano and comprise seven archaeological levels with rich faunal and lithic remains, including some bifaces. A human femur attributed to Homo heidelbergensis was discovered in one of the upper levels of the sequence dated by 40Ar/39Ar, TL, ESR and ESR/U-Th (dating methods) between 610 and 675 ka. These results are consistent with results from faunal and macrofaunal studies, placing the sequence in the Ponte Galeria phase (Galerian, beginning of the Middle Pleistocene). 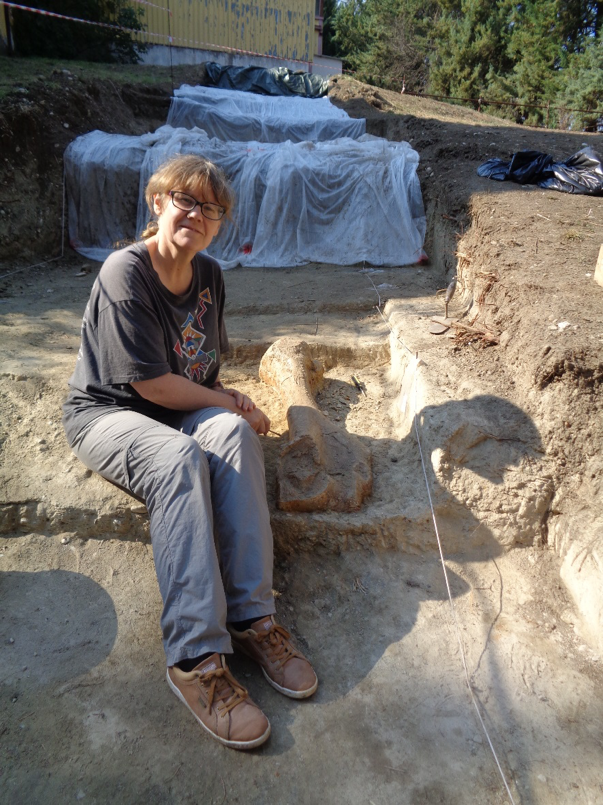 The bottom of the sequence of the site is securely dated to more than 670 ka. But evidence from the oldest layers is still limited to former small test pits, and no dates are available for these levels. This site is a key site, yielding the earliest evidence of bifacial technology in Italy and a rich lithic and bone assemblage. The onset of bifacial technology occurred in Europe during the key time period of 800-500 ka, associated with some behavioral changes possibly related to Homo heidelbergensis dispersals.

Last summer, we re-opened excavations at Notarchirico site with an international and multidisciplinary team in order to enhance our understanding of the earliest Italian evidence of bifacial technology but also to characterize hominin behaviour in Southern Europe at 700 ka regarding raw material procurement, subsistence strategies and core technologies. 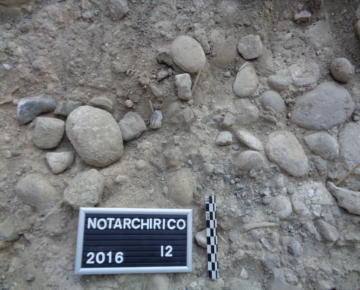 Bed of pebbles (level I2)

The fieldwork season focused on a sector located outside the building protecting the former excavations directed by Marcello Piperno. In the past, limited sampling in this sector had episodically identified the presence of older stratigraphic and archaeological units than unit F (670 ka by 40Ar/39Ar). 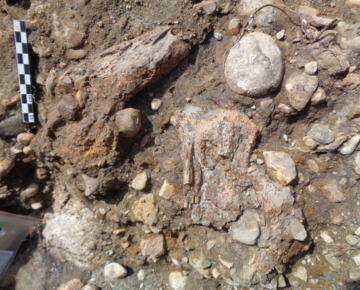 4 Level I2. Bones and artefacts

During one month, a 30-m long trench by 2 m wide was opened on the side of the hill, several metres from the building (Figure 1). The present day superficial soil cover (with a thickness of 30 to 50 cm) was stripped with a mini excavator, enabling rapid access to the in situ stratigraphic units, truncated by the erosion slope.

At the top of the trench, layers F and F1 (black volcanic sands), the last layers exposed by the M. Piperno excavations, were identified and used as a stratigraphic marker for the identification of the underlying units. 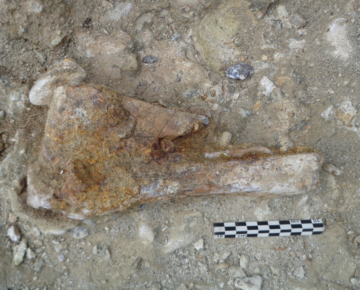 Below these two layers, four major units were observed and numbered G, H, I and J, each of which can be divided into sublevels: level G (G and G1), level H (H1a, b, c, H2a, b, c), level I (I1a, b, c; I2, I2a, b, c, d) and level J (J1, J2). The characteristics of levels G and I are similar to those observed in former surveys. However, level J at the base had not been previously identified.

Fieldwork focused on the oldest units H, I and J. They all contained paleontological and/or archaeological material in the test zones. For example, a whole Elephas antiquus humerus was uncovered in layer H1 (Figure 2). The top of layer H2 contained a residual pocket of small pebbles with lithics and bones. The oldest level, level J, also contained lithic material (pocket of sand not in primary position?). 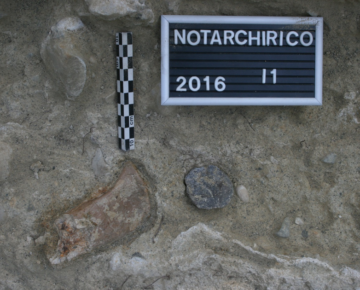 Bone and flint core of level 11

The unit with the most material is layer I and an excavation was initiated in this level. It contains a bed of large pebbles (I2), covered with a bed of small pebbles (I2a) and a level of fine orange-coloured sediments. All these subunits contained abundant lithic and bone material. The bed of pebbles (I2) presents the most material and is a fluvio-lacustrine unit with traces of human occupation (Figure 3). Excavations were set up over a surface of 14 m² (units H, I and J), including 8 m² for level I2.

In the current state of knowledge, the following species have been identified: Elephas antiquus, Bison, Megaceros, Cervids, small bovids, birds … (Figures 4, 5, 6). Microfauna and sediment samples for malacofaunal studies were recovered through the systematic sieving of sediments. The study mission of this material, scheduled for December, will lead to more precise species identification and identify any possible anthropogenic marks. More than 200 lithic objects were recorded in level I, associated with the faunal material. They consist of discoid-type cores, flakes, tools (denticulates, sidescrapers) on small flint nodules (Figures 6, 7). In order to carry out microwear studies and residue analysis, the lithic material was not washed. Several objects on limestone pebbles were also recorded. 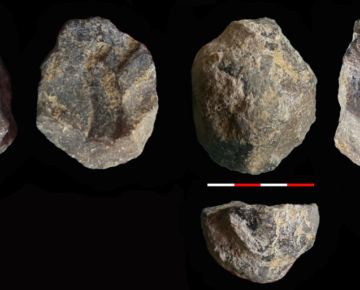 The use of new methodologies and interrogations at Notarchirico on recently excavated material (such as microwear studies, for example) should provide information on thebehaviorr of these hominids in Southern Europe at 700 ka, including raw material management, methods of toolkit manufacture, tool functions and subsistence strategies.

We began prospection in a 3-km perimeter around the site and collected flint nodules as well as various types and shapes of pebbles from dismantled Pleistocene formations. Comparisons are underway in order to identify locally available mineral resources for hominids and to determine whether they collected them from the vicinity of the occupations or whether these nodules were available around the lake, like at most European sites from the 700-600 ka period.

Samples from the new excavation were collected for dating (40Ar/39Ar, ESR, ESR/U-series, TL), but also for mollusc and pollen studies in order to characterize the climatic context. Considering the types of deposits, this context could correspond to MIS 17.

Petrographic and techno-typological studies of the lithic artefacts, as well as the paleontological and archaeozoological study of the faunal remains are in progress. A microwear study will also be carried out on the lithic and bone material from the excavation, as well as the renewed study of the material from the former excavations by M. Piperno (University of Rome), including the hominid femur.

From the Field
Leakey Foundation grantee Shannon Mc Farlin sends an update from the Bwindi Impenetrable National Park in Uganda where she has been cataloging the skeletal remains of mountain gorillas.
« From the Field: Julien Louys, Sumatra
From the Field: Kathryn McGrath »
« BACK TO BLOG