Fossil Finders is a series devoted to telling the stories of the people behind important fossil discoveries. In this installment, Leakey Foundation Fellow Carol Broderick brings us the story of the “Hominid Gang.”

Kamoya Kimeu may be the most famous “Fossil Finder” in paleoanthropology (read his story here), but he was not alone when he made many of his remarkable discoveries. With him was a group of men who came to be known as the “Hominid Gang.” Walking and surveying the often inhospitable rocky landscape in East Africa, these men became outstanding and important fossil finders. 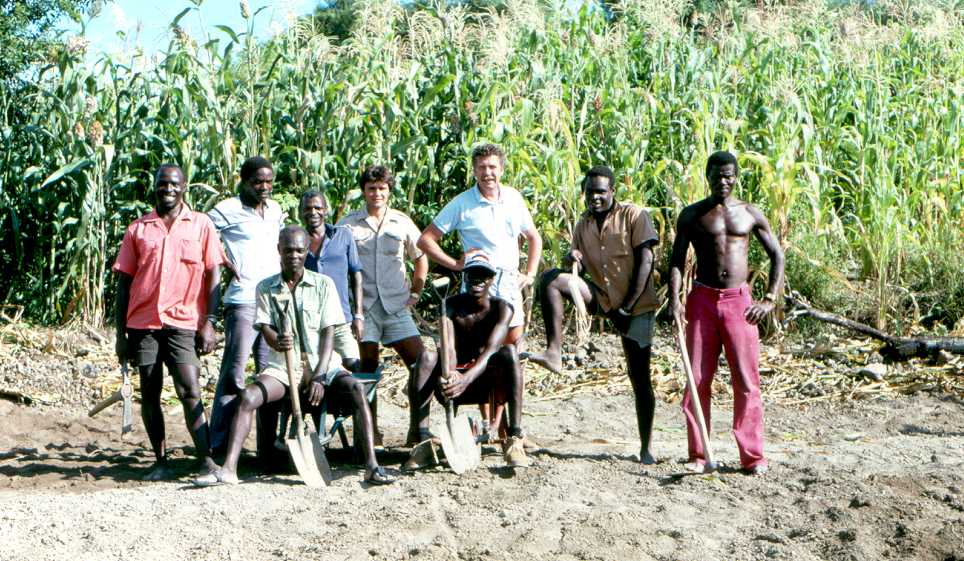 After only a few seasons at Lake Turkana, Richard Leakey realized that Kamoya Kimeu and his “gang” were often in the field without him. He recognized that the men needed to study comparative anatomy, and intensive classes were provided. Leakey believed that fossil finders would find the fossils they knew, and as they learned to recognize new anatomical fragments, the fossils of these new species would become more likely to be discovered.

Virginia Morell in her book Ancestral Passions  explained that Mary Leakey, “expected her workers to be as cautious, keen-eyed, and observant as she was herself, for they had to distinguish between the fossils and stones, pick out the tiniest fossilized rodent’s bone on a sieving screen, or note the chipped edge of an artifact.”

Bernard Ngenyeo is one of the men who demonstrated the exceptional skills of this group of fossil finders. In the 1972 season at Lake Rudolf’s Koobi Fora site (Lake Rudolf was renamed Lake Turkana in 1974), Ngenyeo was the member of the Hominid Gang who took a closer look at a mound of animal fossils his colleagues had already disregarded. He noticed that one of the fossils contained suture marks, a feature he recognized as belonging to hominids. Richard Leakey was called in to investigate the find, and it turned out to be one of the most controversial and enigmatic fossils of all time. 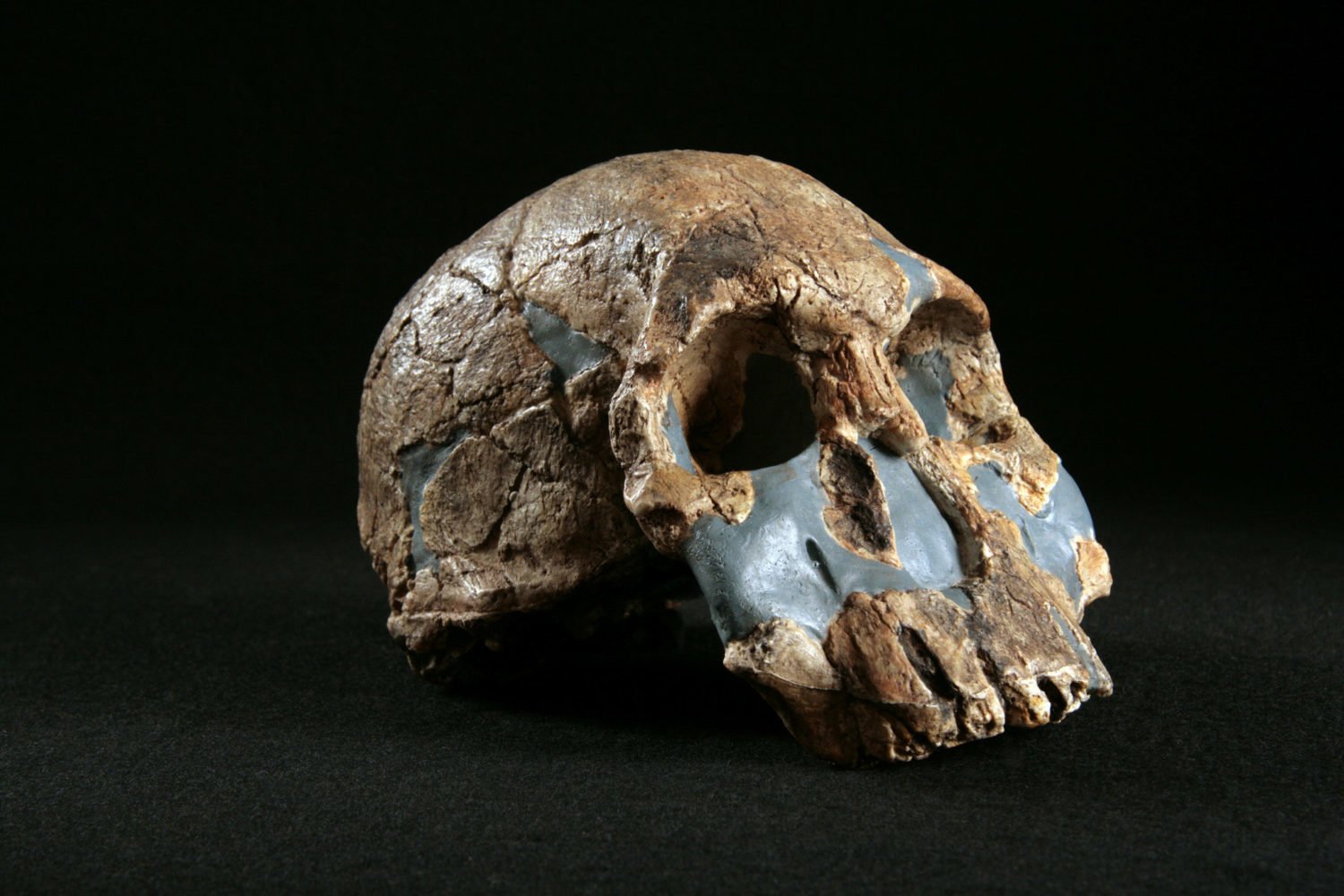 A reproduction of KNM-ER 1470. Photo by The North Carolina School of Science and Mathematics (NCSSM) (CC BY-NC-SA 2.0)

The pieces of broken bone, some incredibly tiny, were part of a hominid cranium, which was named KNM-ER 1470. But what species of hominid was 1470? Its brain size was at the lower end of the Homo erectus scale and much lower than the Homo sapiens’ range, yet it was definitely larger than the Australopithecus craniums that had been found and, at 1.9 million years old, was younger than any other Homo erectus fossils. When the face was reconstructed, it, too, had its own distinctive look as it was more flat and broad than previous fossil finds. At the time, it was almost impossible to identify this odd specimen.

Today, thanks largely to Meave and Louise Leakey’s continuing work at Lake Turkana and their discovery of more contemporaneous and similar fossils, it is clear that it deserves its own species name. This discovery was also momentous because it provided proof for Louis Leakey’s idea that at least two Homo species occupied East Africa at the same time that two Australopithecus groups lived there.

During the 1975 expedition at Koobi Fora, Bernard Ngenyeo also located some hominid jaw fragments and a brow ridge. “So little of the bone was visible,” Meave Leakey wrote in her diary, “how he spotted it I cannot imagine.” This new fossil, dated at approximately 1.7 million years, recorded as KNM-ER 3733 and identified as Homo erectus (sometimes classified as Homo ergaster) confirmed Richard’s idea that Homo erectus existed in East Africa more than a million years ago, and the find was a firm rejection of the single species argument. Without Bernard Ngeneo’s sharp eyes, these fossils may never have been discovered. 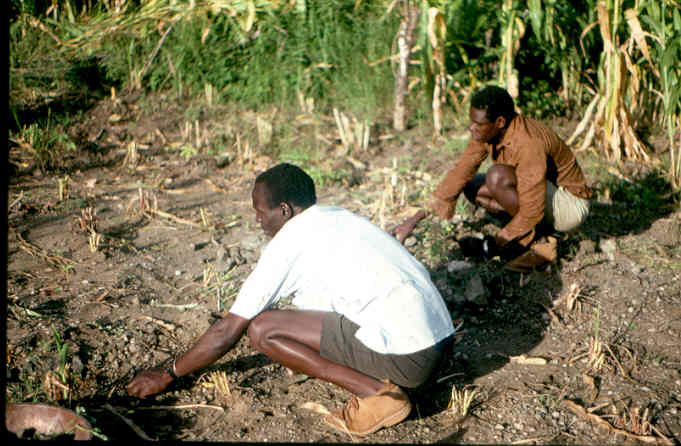 In 1973, Maunda Muluila and Wambua Mangao, two more of the Hominid Gang working with John Harris at Karari Ridge where 1470 had been found, discovered some of the first fossils of the 1973 season, small pieces of a cranium and a fragment of a lower jaw. Maunda Muluila also found a substantial part of a hominid thigh bone in the 1975 expedition at Koobi Fora, a specimen that looked remarkably like the 1470 fossils, and in 1978, he was with Richard when they both noticed the remnants of part of a hominin skull which was later identified as a Homo erectus (or Homo ergaster), KNM-ER 3883. 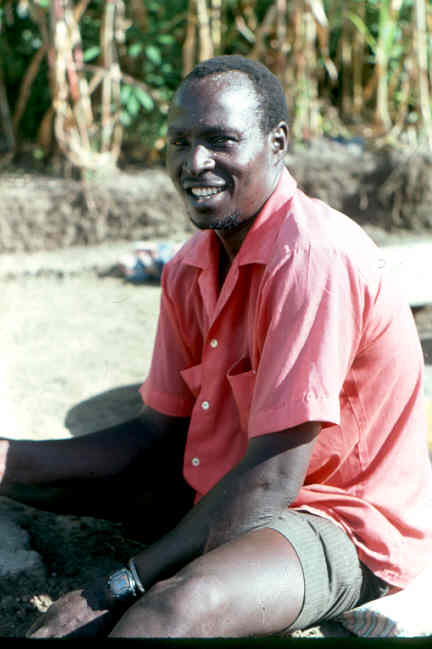 Alan Walker described Wambua Mangao as “the specialist in tasks that require brute force, yet he is able to work in hardest rock with tremendous delicacy.” In 1985, Mangao was the fossil finder who discovered an 18 million-year-old ape, Turkanapithecus kalakolensis at Kalodirr on the western shore of Lake Turkana. Mangao was also with Meave Leakey at Kanapoi in 1994 when he found a section of the upper jaw of a hominid. The geology of the area pointed to an age of 4 million years, one of the oldest hominids yet unearthed. Meave Leakey and Alan Walker later identified it as part of a new species, Australopithecus anamensis, and questions about the age of the oldest hominid would fill pages of anthropological books and articles for years to come. 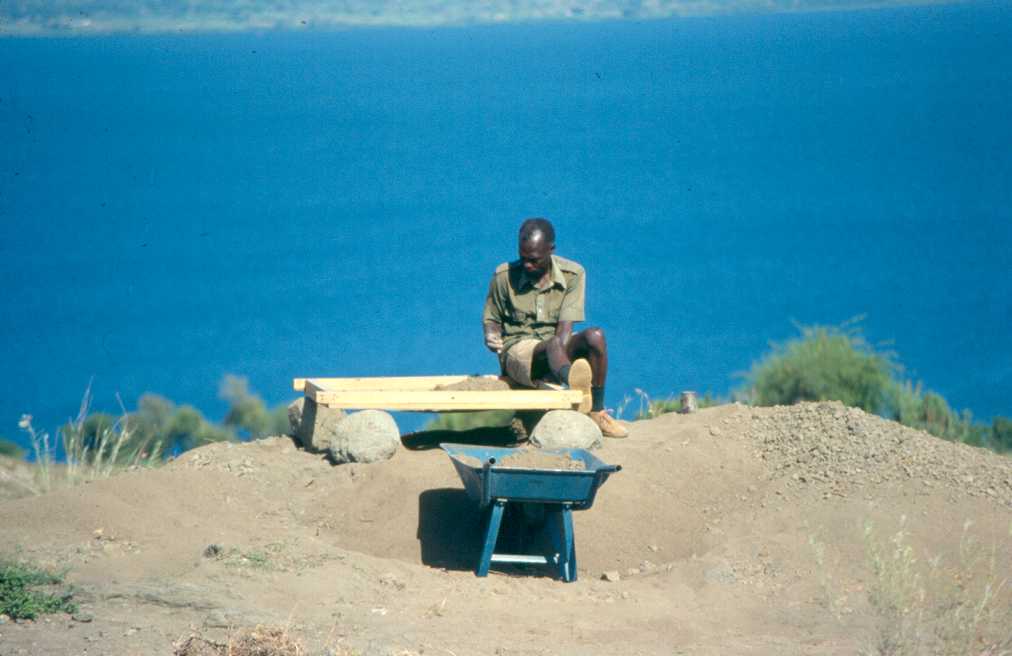 Another prolific fossil finder, a Kamba worker who worked with all of the Leakeys and came to be known as “Puck” because of his unique sense of humor, is Peter Nzube Mutiwa. He, like other members of the Hominid Gang, initially had reservations about digging for our ancestors. “That frightened me very much because I thought those must mark the graves,” he commented as Mary drove in stakes to mark where excavation should take place. In the 1968 expedition to Allia Bay, Mutiwa was the Hominid Gang member who discovered the large mandible of what was identified as Australopithecus boisei – Zinj’s species and the highlight of that season’s expedition. 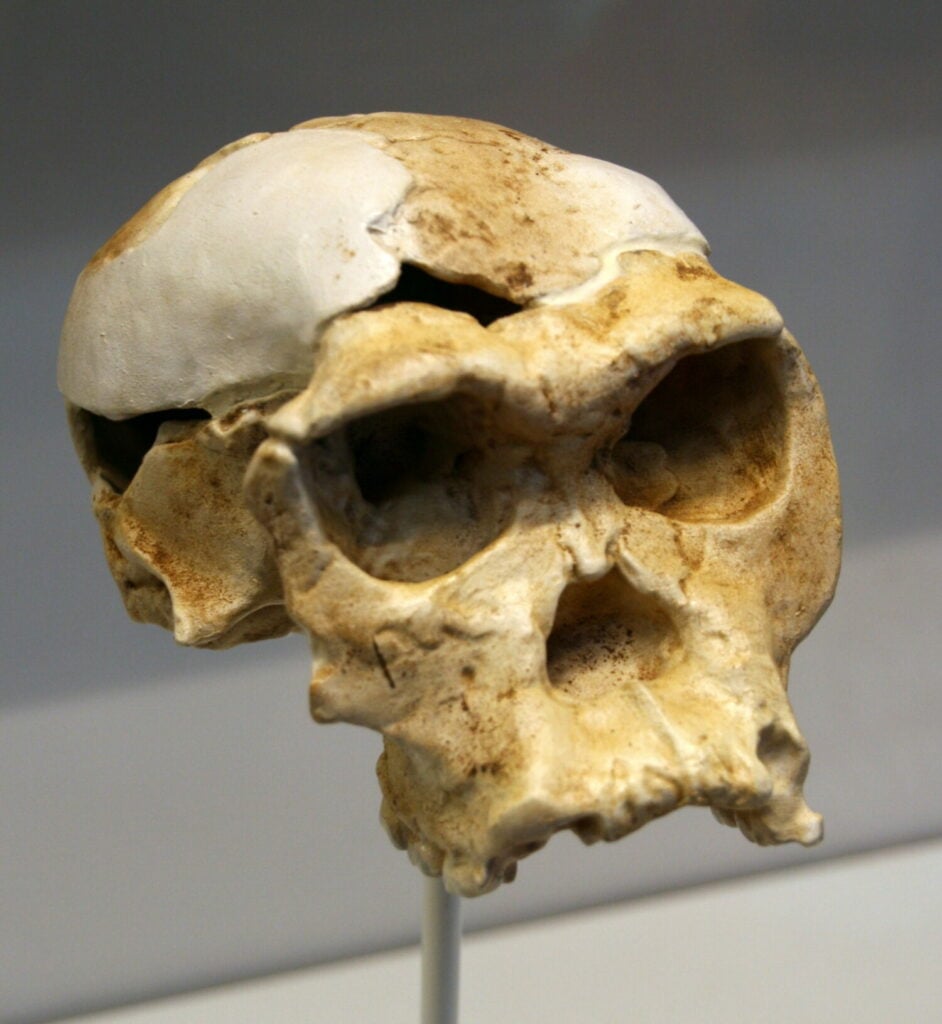 Later that year, working with Mary at Olduvai, Mutiwa found the flattened skull and face of a 1.8 million-year-old fossil (OH 24) nicknamed “Twiggy.” Classified as a Homo habilis, this discovery provided additional evidence that the specimens found at this site were Homo and not Australopithecus. Mutiwa was also the fossil finder who in 1994 pointed out three teeth to Meave Leakey while they were excavating at Kanapoi’s lava-rich site. Later in the season, he discovered the complete lower jaw and part of an ear section of what would be, along with the discoveries of Man’gao described above, what Meave Leakey would later describe as a missing piece of the puzzle, a new species, Australopithecus anamensis.

Mwongela Muoka, another noteworthy fossil finder, found an australopithecine jawbone at Nderati in the 1968 season, and this was only the beginning of his hominid findings. At Koobi Fora in 1969, he discovered a thin hominid skull, a fragment Richard initially believed was in the Homo lineage. Later classified as a female Australopithecus boisei, it created an intriguing end to that year’s Koobi Fora expedition. 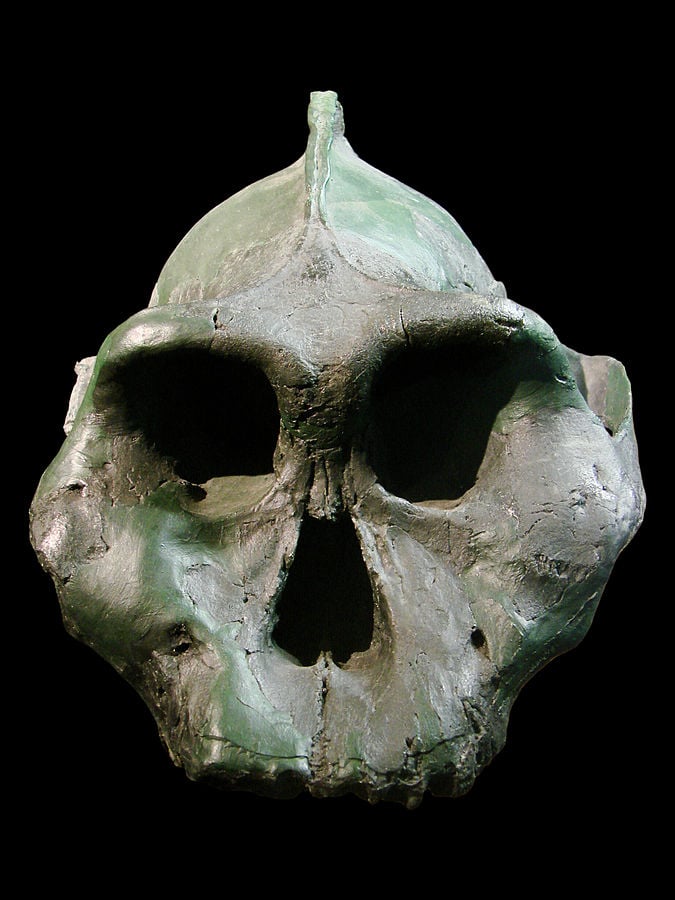 A cast of the “Black Skull” KNM-WT-17000. The ’Black Skull’ is around 2.5 million years old and it is the only known adult skull of Paranthropus aethiopicus. It was discovered in 1985.

In the exciting 1985 season that included the “Black Skull” as one of its most notable discoveries, Muoka found a hominid’s lower jawbone. Dense and thick like the “Black Skull,” it provided Richard Leakey and Alan Walker with further evidence that at least three hominids were living at Turkana 2.5 to 2 million years ago: this species, Australopithecus boisei, and Homo habilis. The family tree was branching out, and the idea that a single species led up to such a diverse group seemed to Leakey and Walker more and more unlikely.

It is almost impossible for those of us who were not lucky enough to be part of one of these early expeditions to imagine how these landscapes were once covered with fossils. So many important fossils were discovered that we will probably never know who actually found each one. In fact, many articles and books simply refer to the discoverer of a fossil as “one of the Hominid Gang,” “Richard’s team,” “Kamoya’s team,” “Kamoya’s crew,” or “one of Kamoya’s men.” Consequently, others who were such an important part of the Hominid Gang may never be correctly identified. But they can be remembered: James Kimani, Musau Mbiti, and Harrison Mutua were working and walking beside the men above who have rightfully claimed their roles in this incredible story.

Like Kamoya Kimeu, the members of the Hominid Gang were trained by the most prominent paleoanthropologists in the field at the time, the Leakeys. They were influenced by their enthusiasm and desire to clear up the mysteries of hominid evolution in East Africa and steeped in the thorough and precise research techniques Mary Leakey exemplified. All of these men deserve credit for their part, certainly a vital part, of adding to the world’s knowledge of the fossil history of our ancestors. Now, most if not all of them are retired, and a new generation of fossil finders will emerge to take their place, but like the fossils they discovered, the names and the skills of the Hominid Gang will be forever remembered.

Journal Article, Guest Post
Human beings used to be defined as “the tool-maker” species. But the uniqueness of this description was challenged in the 1960s when Dr. Jane Goodall discovered that chimpanzees will pick and modify grass stems to use to collect termites. Her observations called into question homo sapiens‘ very place in the world. Since then scientists’ knowledge of animal tool use has expanded exponentially.
« Unraveling the Mystery of Human Bipedality
The Discovery of “Zinj” »
« BACK TO BLOG